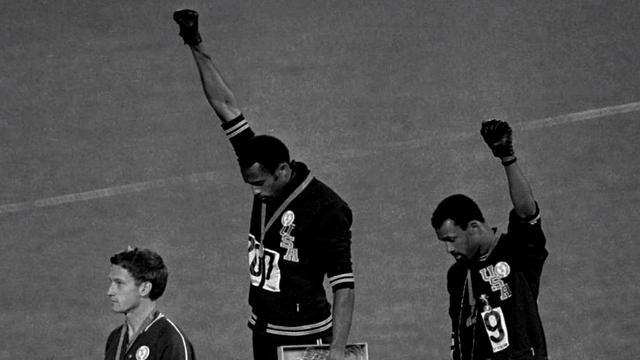 Sports play a significant role in the U.S. and the contributions of African-American athletes often have transcended the playing field and paved the way for larger changes in society.

The sports exhibit at the Smithsonian’s National Museum of African American History and Culture chronicles the stories of these athletes and their struggles.

Olympic swimmer Simone Manuel was in awe as she toured the museum a few days ago.

“It’s great to be here and just see all of the exhibits and just to be a part of history,” Manuel she told CBS News’ James Brown.

Manuel made history at the Rio Olympics when she became the first African-American woman to win an individual gold medal in swimming.

“What was going through your mind when you turned back and looked and then the tears came?” Brown asked.

“A lot went through my mind,” Manuel said. “There was a lot emotions that went into that, just going back to when I even first started swimming and just the whole journey – the highs and lows that I had,” Manuel said.

“Yeah, some lows. I mean, one of them was the social aspect of not feeling like I fit in,” Manuel said. “And just looking back on the history of swimming and knowing a lot of people who have inspired me to stay in the sport. There’s Maritza Correia, Cullen Jones and so many others before me whose journey to get to this level wasn’t easy. So hopefully this bridges the gap and kind makes it easier for people that come behind me.”

Dr. Harry Edwards has studied the impact of black athletes on American society for more than 40 years. He said athletes like Manuel stand on the shoulders of trailblazers -- like Jim Brown, Bill Russell, Muhammad Ali, Althea Gibson and Wilma Rudolph -- who were key to the larger civil rights movement.

“Every generation has to add its contributions to the struggle,” Edwards said.

“Our Gandhi was Jackie Robinson. He was aware of the role of the clergy and lay organizers in the community in preparing black people in the stands, where they would hear the epithets,” Edwards said. “Just as Jackie had to be cool on the field, they had to be cool in the stands. By the time Dr. [Martin Luther] King came on the scene with the Montgomery bus boycott effort, we had already as a people been involved in non-violent direct action for 10 years.”

“A whole nation of people saw themselves and what these athletes were able to accomplish on the field and cheer it in hopes of having the impact in society?” Brown asked.

“Absolutely. So if there’s not that struggle, you don’t have Tony Dungy hoisting that Lombardi trophy,” Edwards said. “And without that level of dignity and respect, there’s no way that they ever look at a Barack Obama and say, ‘Yeah, he could be president.’ Sport made that contribution.”

Edwards said the Olympics has been a powerful international platform, from Jesse Owens’ four gold medals at the 1936 Olympics in Nazi Germany, to the protest by Tommie Smith and John Carlos, which he helped organize, at the 1968 Games -- a moment memorialized in the museum.

And that history is not lost on 20-year-old Simone Manuel.

“And now you’re in the same museum with the likes of Jesse Owens?” Brown asked.

The National Museum of African American History and Culture​ will open to the public on Saturday, Sept. 24.