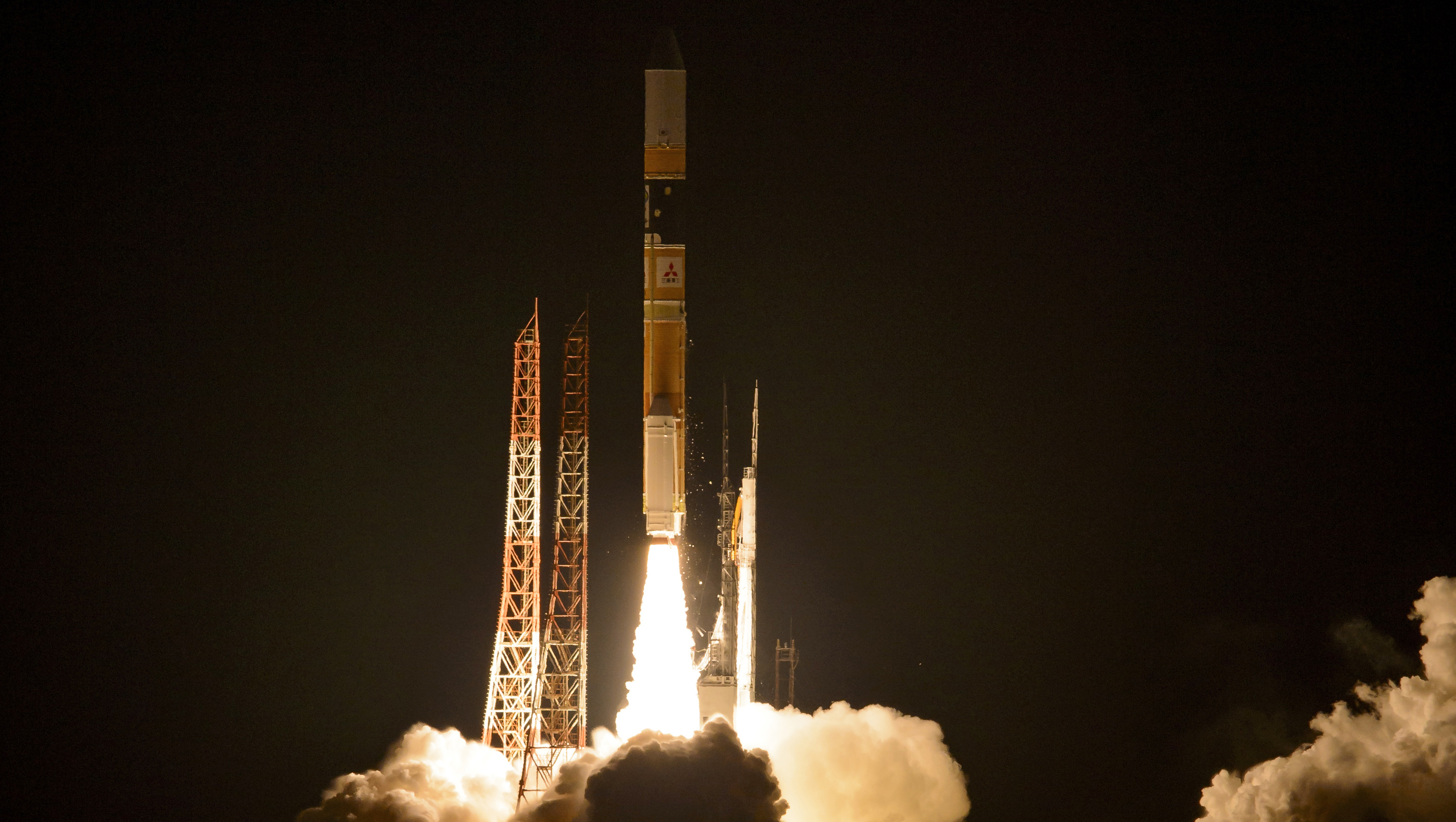 A Japanese H-2A rocket blasted off and streaked into space Thursday, boosting a sophisticated weather research satellite into orbit, the centerpiece of a $1.2 billion international mission to study global precipitation in an ongoing effort to improve climate models, forecasting and understanding of the water cycle critical to life on Earth.

Equipped with a pair of state-of-the-art instruments, the Global Precipitation Measurement Core Observatory will provide world-spanning, near real-time measurements and anchor an international fleet of space-based climate research and weather stations, serving as a calibration standard to improve accuracy across the constellation.

"Since rainfall and snowfall vary greatly from place to place, and in space and time, satellites can provide a more uniform set of observations globally compared to ground instruments," Neeck said. "The GPM, through its core observatory and constellation of satellites, will dramatically improve our knowledge of global precipitation and our ability to forecast it and its consequences.

Said Ramesh Kakar, GPM program scientist at NASA Headquarters in Washington: "The water cycle is central to creating an understanding of weather, climate and water resource management for the society. You've got to measure precipitation if you want to study the water cycle."

The mission got underway at 1:37 p.m. EST (GMT-5; 3:37 a.m. Friday local time) when the 17-story-tall H-2A rocket's hydrogen-fueled first-stage engine roared to life, following seconds later by ignition of two solid-fuel strap-on boosters. In an instant, the rocket vaulted away from the picturesque Tanegashima Space Center launch pad on the southern coast of Japan, lighting up the pre-dawn sky with a fiery plume.

The climb to space went smoothly, with the solid-fuel strap ons falling away as planned just under two minutes into flight, followed by the spent first stage six minutes and 44 seconds after liftoff. The second stage engine ignited at an altitude of about 148 miles and completed the push to orbit, shutting down about 15 minutes into flight.

The 8,500-pound Global Precipitation Measurement Core Observatory satellite, built at NASA's Goddard Space Flight Center in Greenbelt, Md., was released into a 250-mile-high orbit about one minute later. A few minutes after that, its two solar panels began unfolding as expected.

If all goes well, the spacecraft's instruments and subsystems will be activated over the next 10 days or so, following by two months of detailed checkout and calibration before the the satellite begins full-time science observations.

"We really do need to care, because less than 1 percent of all the water on Earth is easily accessible for us to use as fresh water resources," she said. "And water is vital to life on Earth. We need to measure precipitation both frequently and at the local and regional scales so that we can follow fresh water through the water cycle of the Earth."

The GPM Microwave Imager, or GMI, will measure total precipitation, including light rain and snowfall, while the Dual-Frequency Precipitation Radar, or DPR, will give researchers a three-dimensional look at the structures inside clouds that generate rain and snow.

NASA spent $933 million building the spacecraft and the microwave imager, provided by Ball Aerospace and Technology Corp., while the Japan Aerospace Exploration Agency, or JAXA, contributed $226 million for the H-2A rocket, built by Mitsubishi Heavy Industries, and the multi-channel radar, built by NEC Toshiba Space Systems.

The GPM core observatory mission builds on the experience gained by NASA and JAXA in the joint Tropical Rainfall Monitoring Mission program, a satellite launched in 1997 to measure rainfall in tropical latitudes. The new spacecraft will extend those observations to more northern latitudes and add extensive new capabilities.

"GPM will join a NASA Earth science fleet of 16 missions currently on orbit," Neeck said. "They're devoted to studying the Earth as an integrated system in six science focus areas ranging from atmospheric composition to the Earth's surface and interior. GPM will support the water and energy cycle, the weather and the climate science focus areas."

The spacecraft's instruments "will allow scientists to see inside clouds," he said. "The GMI will sense the total precipitation within all cloud layers, including for the first time light rain and snowfall. The DPR will make detailed three dimensional measurements of precipitation structures and rates as well as particle drop size.

"Together, the GMI and the DPR will provide a database that will be used to compare and combine the other constellation satellites microwave observations to make uniform global precipitation datasets."