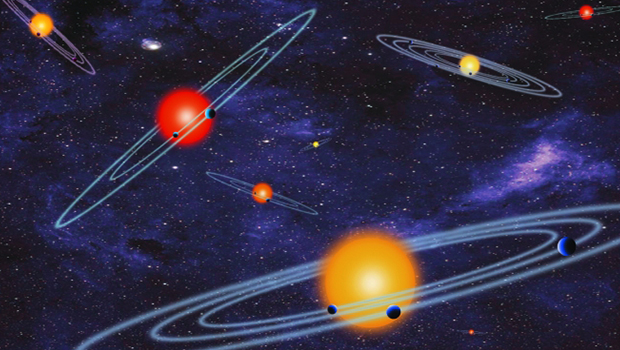 The planets were "found" in observations Kepler made in the first two years of its operation indicating solar systems where more than one planet might be lurking. Using a technique called "verification by multiplicity," a team led by Jack Lissauer of NASA's Ames Research Center and Jason Rowe at the SETI Institute was able to confirm the members of those multi-planet systems.

Nearly 95 percent of the newly discovered planets are smaller than Neptune, which is about four times bigger than Earth, and the solar systems all follow a similar "pancake" architecture, with the planets arranged in a plane around the parent star similar to the arrangement of Earth's solar system.

The data also show it is common for solar systems with relatively small planets to be in close orbits around their stars.

"Four years ago, Kepler began a string of announcements of first hundreds, then thousands, of planet candidates -- but they were only candidates," Lissauer said in a NASA statement. "We've now developed a process to verify multiple planet candidates in bulk to deliver planets wholesale, and have used it to unveil a veritable bonanza of new worlds."

In a teleconference with reporters, Lissauer said the new technique "will be productive in the future. These results are based on the two years of Kepler observations. And with each additional year, we'll be able to bring in a few hundred more planets."

Sara Seager, a professor at the Massachusetts Institute of Technology who was not involved in the study, said the results are a major step forward for planet hunters.

"For astronomers, we need to validate planets. Having 'candidates' just doesn't cut it," she said. "As scientists, we want a good qualitative handle on what's actually going on. With hundreds of new validated planets, Kepler reinforces findings that small planets are extremely common in our galaxy."

Launched in March 2009, Kepler was equipped with a 95-megapixel camera that was aimed at a patch of sky the size of an out-stretched hand that contains more than 4.5 million detectable stars. Kepler monitored the light from 160,000 of those suns.

The camera cannot directly detect the light reflected by an exo-planet. But if a planet passes in front of a star as viewed from Kepler, the star's light will periodically dim slightly as the planet moves through its orbit. By precisely measuring those tiny changes, Kepler researchers can indirectly confirm a planet's presence, size and distance from its sun.

Large planets in close orbit around their stars were relatively easy to find. But to confirm Earth-like worlds in habitable zone orbits, that is, at a distance where water can exist as a liquid, Kepler needed to make repeated observations over three to four years, or orbits.

Multi-planet systems can be detected by carefully studying the duration and frequency of a star's dimming.

But a major stumbling black is confirming that dimming seen by Kepler is, in fact, caused by planets and not by a smaller star or even a binary star system in the background. As it turns out, multi-star systems are inherently unstable while multi-planet solar systems are more well behaved. The verification by multiplicity technique identifies those systems.

"This physical difference, the fact that you can't have multiple star systems that look like planetary systems, is the basis of the validation by multiplicity," Lissauer told reporters. "What we've been able to do with this is strike the mother lode, get a veritable exoplanet bonanza. ... We've almost doubled, just today, the number of planets known to humanity."

The 715 planets announced Wednesday were found in data collected by Kepler between May 2009 and March 2011.

Four of the newly confirmed planets are less than 2.5 times the size of Earth and orbit their host stars in the so-called "Goldilocks" zone where water can exist as a liquid -- a requirement for life as it is known on Earth.

"From this study we learn planets in these multi-systems are small and their systems are flat and circular -- resembling pancakes -- not your classical view of an atom," research co-leader Jason Rowe said in a statement. "The more we explore the more we find familiar traces of ourselves amongst the stars that remind us of home."

Kepler completed its primary three-year mission in November 2012. NASA managers promptly approved a four-year mission extension. In 2013, the spacecraft was hobbled by the failure of a second gyro stabilizer, preventing the pointing accuracy required for planet detection.

But scientists have four years of observations in hand, including more than 3,000 planet candidates, many of which may be confirmed with additional observations and analysis.

"Today's announcement is based on the first two years of Kepler data," Seager said. "We expect many more small planets to be uncovered during analysis of the second two years of data. Kepler is the gift that keeps on giving."

The results of the latest study will be published March 10 in The Astrophysical Journal.