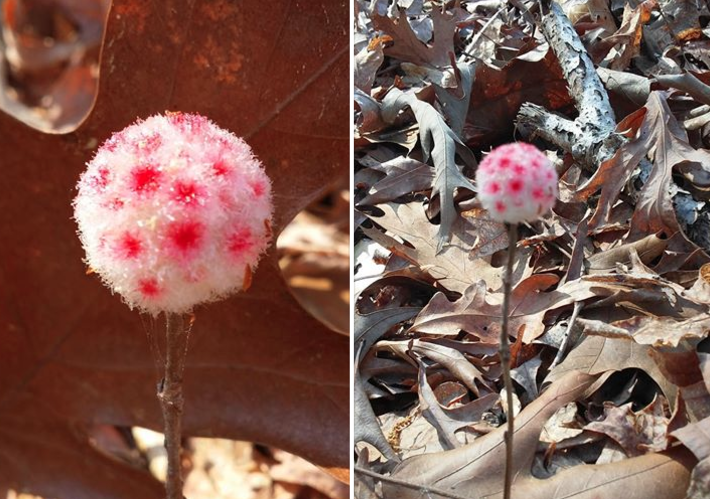 With its long green bumpy stem and dark red polka-dotted fuzzy top, the “flower” looked like one of the Truffula trees the Lorax would protect in a Dr. Seuss book.

A Texas parks and wildlife ranger spotted the strange, colorful object poking out from underneath a pile of dry brown leaves while he was out doing trail maintenance around Atlanta State Park in Austin, Texas, on Tuesday.

“Is it a natural lollipop? Is it a flower designed by Dr. Seuss?” the Atlanta State Park asked in a Facebook post, which has since gone viral with nearly 2,000 shares.

Then came the Dr. Seuss jokes.

“The Lorax!” another chimed in.

But the park said the seed pod, which from afar resembles a dandelion flower before it blooms, is not, in fact, a creation of Dr. Suess: It’s actually a wool sower gall. Galls are abnormal plant growths caused by organisms such as insects, fungi or bacteria.

“These are created when a wool sower wasp lays its eggs in a white oak,” the park explained. “When the eggs hatch in spring, chemicals on the grubs stimulate the plant to produce this gall, which provides food and protection for the growing wasps.”

Atlanta State Park superintendent Sam Knox told CBS News it’s not technically a plant, but rather a seed pod for non-stinging wasps. Female wasps lay a clutch of eggs on the bottom sides of leaves and it grows into a gall.

“I’ve never seen one specifically like this,” Knox said. “It’s very unique, and very early in the year.”

Wool sower galls usually start popping up around May or June, but due to a mild winter, Knox expects to see some even earlier this year.

“They don’t all look that elongated in shape,” Knox said. “This one was about the size of a ping pong ball. I’ve never see one with red spots like that. It’s awesome to see and very unique.”

Houston resident Jeremiah Allen said he’s seen galls like this in Sam Houston National Forest and other areas nearby, but he never knew the exact kind -- until he saw the Atlanta State Park’s Facebook post.

“I was pretty intrigued when I first saw it,” Allen told CBS News. “I’m knowledgeable about many things in nature, but strictly on an amateur level. I’m self-taught.”

Though Allen has seen a lot of different wool sower galls, not all were as bright and colorful as the one spotted at the Atlanta State Park.

“There’s many different kinds,” he said. “I believe the color depends on the type of wasp and what kind of plant they choose to use.”

Due to the overwhelming response their Facebook post, Knox said the park plans to host a nature walk on Friday at 1 p.m. to teach those who are interested more about the wool gall wasp. The only rule: Don’t touch it.

“A lot of people think with wasps you’re going to get stung,” he explained. “They don’t pose any harm to humans, but if you touch them you’ll damage it and end up killing all or most of the larvae inside. The gall that you see is what protects it from bacteria and other insects from feeding on them.”