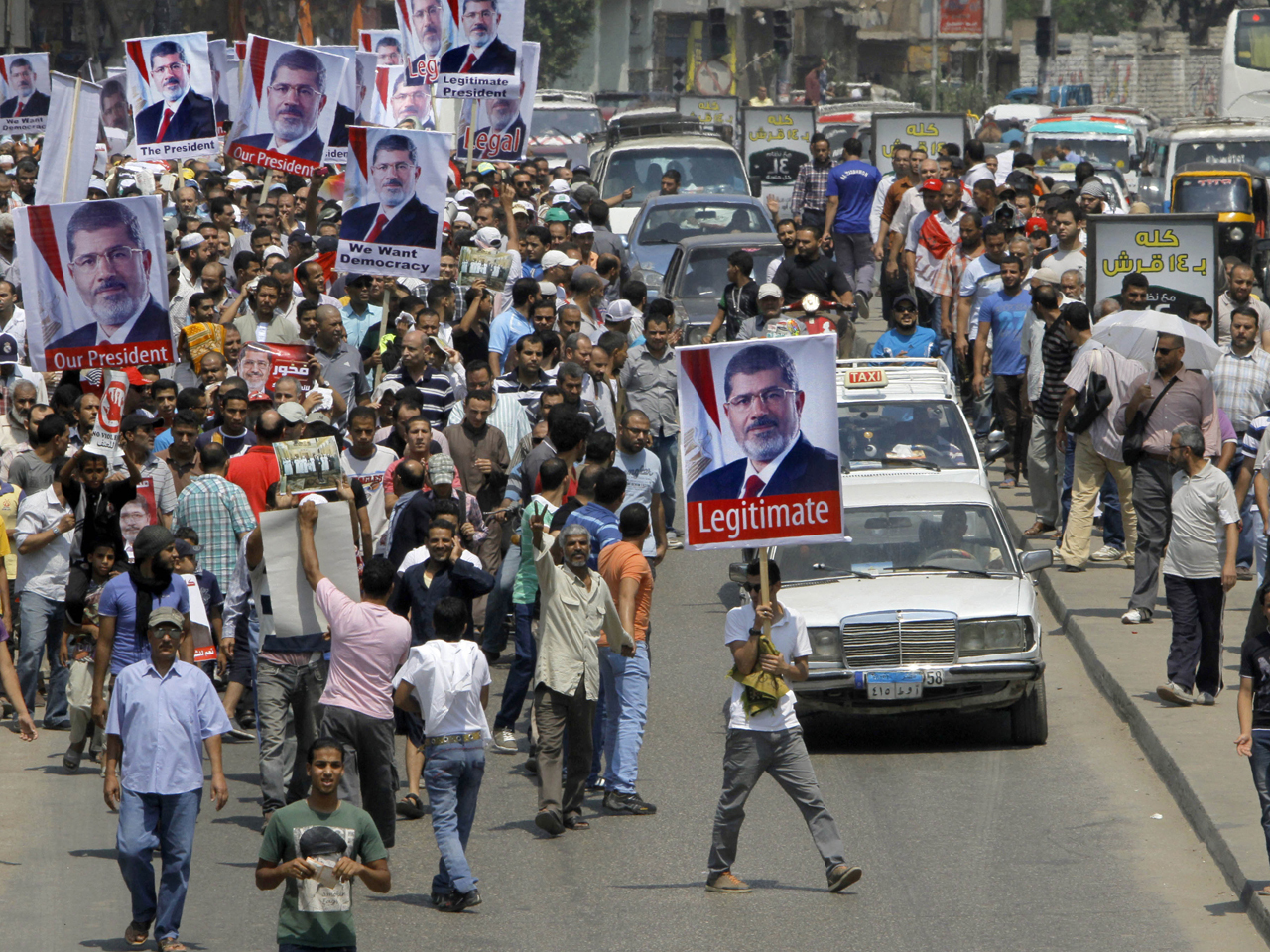 CAIRO Thousands of protesters calling for the return to power of Egypt's ousted Islamist president demonstrated in Cairo Friday as the military warned it will crack down on any violence, underlining the point with a show of force by fighter jets flying over the capital.

Youth activists who launched the mass protests that led to Mohammed Morsi's toppling by the military also planned a demonstration in Cairo's Tahrir Square, raising fears of a fresh round of clashes in the capital.

CBS News' Alex Ortiz reported that the Muslim Brotherhood claimed in a statement emailed to media outlets that supporters would take to the streets in 18 locations across the Egyptian capital following noon prayers and then march to a central mosque in eastern Cairo, where thousands have been holding a sit-in since Morsi was removed.

The Interior Minister, in charge of police, cautioned supporters of the ousted president from going to Tahrir Square. In a statement released Friday on the ministry's Facebook page, Mohammed Ibrahim also warned both sides against committing acts of violence.

The marches come just days after a new interim Cabinet was sworn-in that includes women, Christians and members of a liberal coalition opposed to Morsi, but no Islamists as the country finds itself deeply polarized over the July 3 military coup that was supported by millions who accused Egypt's first democratically elected leader of abusing his power and giving too much influence to the Muslim Brotherhood.

Waving Egyptian flags and holding up pictures of Morsi, marching protesters chanted slogans against army chief Gen. Abdel-Fatah el-Sissi. "El-Sissi is a traitor!" the crowds chanted. "Morsi is our president!"

Mainly Islamist supporters of Morsi have been holding a sit-in in front of a mosque in eastern Cairo since Morsi was removed and the numbers swelled as his supporters answered a Brotherhood call to join the rallies on Friday in an event dubbed "Breaking the Coup."

"People are united in their call for the return of President Mohammed Morsi. The elected, legitimate president," Ayman Wahid said as he joined the march in Cairo. He said he represents "real Egyptians" who want Morsi back.

Pro-Morsi supporters defied the sweltering heat to take to the streets in the northern coastal city of Alexandria and several Nile Delta cities.

Yasser Meshren, who came to Cairo from the southern province of Bani Suweif, said the Egyptian military had tricked the people by overseeing the security of elections only to remove Morsi, disband the country's interim parliament and suspend the constitution, which had been approved in a referendum.

"You bring us down so we can give our voice as a lie," Meshren said, referring to the armed forces. "You stole my mother and my sister's voice."

Police and military troops and armored vehicles were deployed heavily in Cairo around security and military installations, court houses, and the capital's entrances, security officials said, speaking on condition of anonymity because they weren't authorized to give information to the media.

Small incidents of violence broke out in Cairo, according to the security officials. Pro-Morsi supporters and opponents began shouting at one another after traditional Friday prayers in the main Al-Azhar Mosque and police detained six Islamist protesters for throwing rocks. Separately, a man was stabbed and hospitalized when a crowd of the deposed president's supporters questioned his identity and found out he was a policeman in civilian clothing.

Fears of greater violence were high after clashes between the two sides and authorities in recent days left more than 60 people dead, including 51 Islamist protesters who were killed when the military opened fire on demonstrators under disputed circumstances outside the Republic Guard forces club. The Islamists have accused the troops of gunning down the protesters, while the military said it was provoked by armed Morsi supporters who were trying to storm a military building.

Fighter jets flew over the protesters, and military spokesman Col. Ahmed Mohammed Ali issued a stern warning, telling civilians not to pose as military personnel or approach military installations or troops, saying anybody doing so will risk death.

Ali, in a statement posted on Facebook, also warned against violent protests or obstruction of daily life, adding that military troops were deployed in fixed positions.

The military also dropped flyers warning against violence as a crowd of at least 400 pro-Morsi protesters marched through northern Sinai's main city of el-Arish. The flyers urged people to protect their land and the Sinai Peninsula from "terrorists" and provided two numbers for people to call to report suspicious behavior.

The area has been the most lawless corner of the country since autocratic leader Hosni Mubarak was ousted in a popular uprising in 2011, and the number of attacks by militants against Egyptian security forces has risen since Morsi's overthrow. To combat the wave, Egypt has beefed up its forces there with the agreement of neighboring Israel, which is also concerned about the growing strength of religious extremists in the area.

The rallies coincided with the 10th day of the Muslim fasting month of Ramadan, which Egyptians celebrate as the day their armed forces crossed the Suez Canal in the 1973 war with Israel. The surprise assault led to the return of the Sinai Peninsula to Egypt, which had been occupied by Israel.

Fighter jets flew overhead in an air show throughout the city to commemorate the day.

Meanwhile, the Brotherhood party says seven leaders of its parent group, including the former speaker of parliament, and an ultraconservative Salafi preacher were transported to a heavily guarded prison. The party said the move is illegal since the men have not yet been charged. They have been accused, among other things, of inciting violence. Prison officials were not immediately available for comment.

The ousted president, who has been replaced by interim leader Adly Mansour, has been held incommunicado at an undisclosed military facility since his ouster. He has not been charged with any crimes.