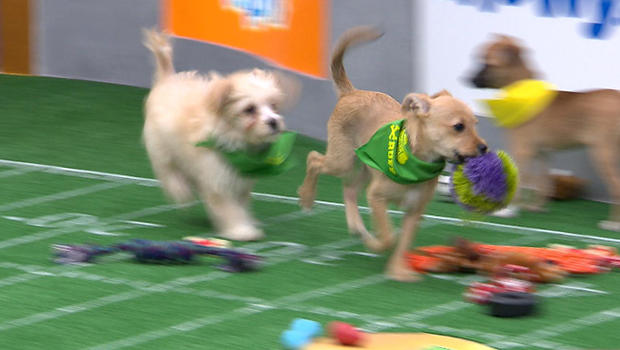 WOOF is the word of the day at that OTHER sporting event Richard Schlesinger is taking us to...


On this Super Bowl Sunday, of all Sundays, permit us a touch of heresy. With apologies to the Patriots and the Eagles, theirs is not the only game in town.

This afternoon there is another competition, of sorts: Team Ruff vs. Team Fluff. Ninety puppies playing in the 14th Annual Puppy Bowl, on the Animal Planet cable channel.

Mango and Morris, Boomer and J.Paw are part of the game where the rules are simple and enforced by referee Dan Schachner.

"I always say the rules of Puppy Bowl could fit on, like, one post-it note," Schachner said. "It's basically, drag a chew toy into the end zone. Doesn't matter which end zone! You could play for the other team, we don't care!"

Schachner was philosophical: "They're all puppies. They've all got their own agendas. Most of them are not that socialized. They're certainly not housetrained, and we're trying to get them to play a competitive football game."

What could possibly go wrong?

And that's pretty much where the similarity ends. In this game, the players don't curse the ref; they kiss him.

But Schachner is more than just the referee. He is providing foster care to one of the players, Biscuit. She's three months old, of "uncertain" pedigree, and like all the dogs in the Puppy Bowl she's looking for a home.

"One-hundred percent of the dogs on Puppy Bowl are from rescue groups and shelters across the country," Schachner said.

"How many of them end up getting adopted?" Schlesinger asked.

"We have a 100% adoption rate. You imagine, we're in a room with these pups and hundreds of volunteers. The chances of them getting adopted are very, very high."

The Puppy Bowl started small, 14 years ago, just a few players in a room in Maryland. Erin Wanner says when it started it was a "hair-brained idea." She is in charge of the Puppy Bowl now, and she has watched it grow.

"It is a much bigger effort than you can imagine," she said. "We have a whole casting process, including a big wall of puppies. And we're trying to make sure that we get as many shelters represented as we can. And then, of course we need the right mix of puppies."

This year's puppies come from 48 shelters around the country and from Mexico -- where Mango was found, on the streets of Puerto Penasco, by a rescue organization called Compassion Without Borders. He was brought to their shelter in California, before making the trip to the Puppy Bowl -- a trip that would change his life.

Mr. Wigglesworth, who looks to be mostly, if not all, Shar Pei, came from Laurie Johnson's Florida Little Dog Rescue in Orlando. She noted, "Florida is prime football recruiting grounds!"

They recruit a lot of puppies here, too. She has sent more than 40 in four years to the Puppy Bowl.

"It is an honor," Johnson said. "It shows that our rescue is doing rescue the right way. And we like that we're chosen as ambassadors to spread the message of adopting."

Mr. Wigglesworth represented his shelter well, although maybe not exactly as a competitor.

Managing all these dogs is a lot like herding cats.

But it is worth the trouble for Animal Planet. This is the highest-rated show for the channel all year.

And it's worth it for the shelters, too.

Laurie Johnson said that after the Puppy Bowl broadcast, the phone at her shelter will "blow up. We'll get thousands of phone calls on Puppy Bowl day, which is great. And so Clyde may already be adopted, but he's going to help hundreds of other dogs get adopted."

They call it the "Puppy Bowl effect." "People think you can't get great dogs like this in shelters and rescue, and you can. So we're willing to put the work into Puppy Bowl to get the message out," Johnson said.

This show has been so successful at getting puppies adopted that this year Animal Planet has started the Dog Bowl, so older dogs -- who can be difficult to place -- get a chance for what Mango and the other puppies have now: a permanent home.

Mango is now a world away from Puerto Penasco. He's living with Sydney Baldwin, who worked on the Puppy Bowl -- the only game on TV where there are no losers.