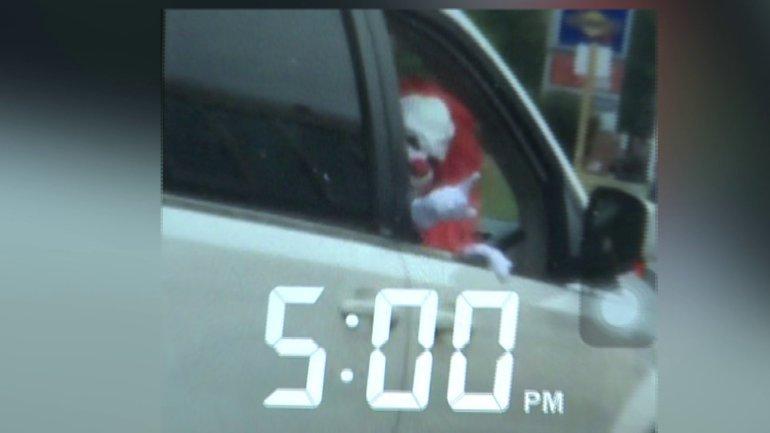 For months, children up and down the East Coast have been reporting creepy clown sightings of mysterious origin and intent. One boy told police he heard “chains and banging” on the front door of his home. Another boy said he saw clowns “flashing green laser lights” in his neighborhood. And numerous other children have reported clowns​ allegedly trying to lure them into the South Carolina woods.

So, this week – when drivers in Virginia spotted someone in an “It” mask peering out the passenger-side window of a minivan on Laburnum Avenue – they were understandably spooked.

One driver posted a photo to social media as the clown rolled down his window and began waving at them. The clown in question, however, turned out to be far from what they thought.

It was simply a 12-year-old autistic boy named Angus Brown, overeager for Halloween.

Angus had recently purchased a Pennywise clown costume for the upcoming holiday while his mother was out of town on a trip. At the time he unknowingly frightened other drivers, Angus’s grandmother was driving him to surprise his mom (with said clown costume) upon her return.

“There was no malicious intent. He’s just a kid excited about his new costume,” Holly Brown told CBS Richmond affiliate WTVR about her son. “He was never a threat, and is in fact a very sweet child with autism and a newfound love of Stephen King stories, hence the ‘It’ costume.”

After the photo of Angus began spreading across the internet and on local newscasts, Brown says she had a talk with her son about the appropriate times at which to wear Halloween costumes... no matter how excited you may be about them.

“We all agree that he must save his Halloween costume to be worn at Halloween functions only due to the current scary-clown-sighting situation,” she said. “This clown was simply a little boy in a new toy.”

Interestingly, it is actually against the law in Virginia for anyone over the age of 16 to wear a mask or hoodie over his or her face to conceal their identity. Since Angus was only 12 at the time of the incident, that law obviously doesn’t apply to his case.

One thing’s for sure, though: When it comes to potential sightings of masked people up to no good, the state of Virginia is not clowning around.