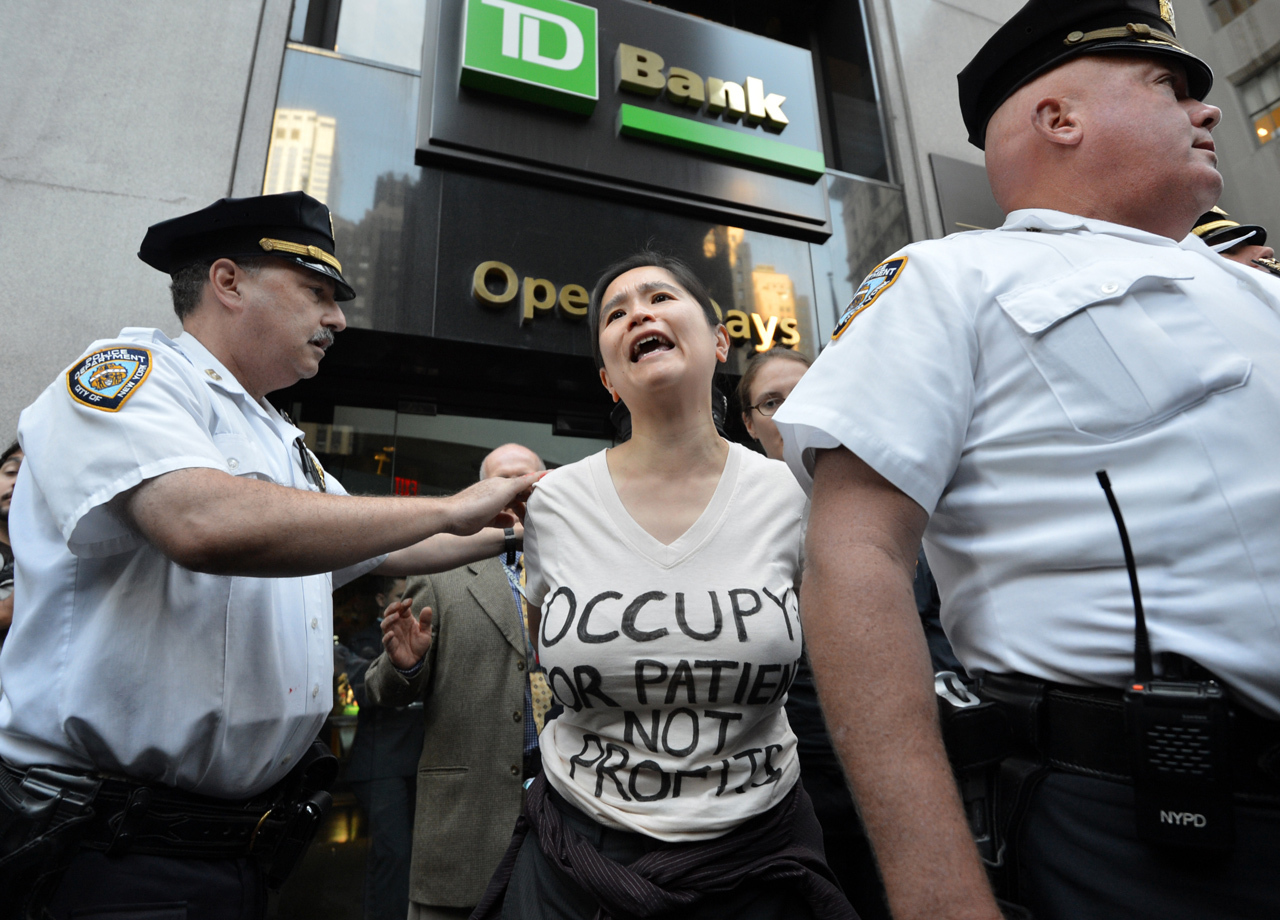 (CBS/AP) NEW YORK - Police say more than 100 people have been arrested as Occupy Wall Street protesters march in small groups around Manhattan's financial district to mark the anniversary of the grass-roots movement.

Activists are marking the one-year anniversary of the protest movement with a day of demonstrations directed at the richest one percent of the country. As they've done since the start, they are mostly targeting banks and financial institutions.

About 200 protesters rallied at Zuccotti Park early Monday morning before marching toward the New York Stock Exchange nearby, the crowds swelling to about 500 demonstrators. Loud chanting and the sound of drums filled the air.

Sit-ins are planned at various intersections in the city.

Dozens of police officers, some on horseback, and police vans lined the streets of the Financial District.

The grass-roots effort began September 17, 2011 as an occupation of Foley Square near the New York Stock Exchange. What began as a targeted assault on Wall Street eventually broadened into a larger, nationwide movement targeting wealth inequality between the richest one percent of America and the rest of the country, the so-called 99 percent.

Protesters set up camp at nearby Zuccotti Park and stayed for nearly two months before getting kicked out by the city. A march across the Brooklyn Bridge ended with more than 700 arrests.

After 12 months, Occupiers have broken into several smaller groups with different agendas, and the crowds were visibly smaller.

Leaders of the movement have said one year isn't enough time to determine its success or failure, but insist the momentum is still here and isn't going anywhere any time soon.

"We have shifted the conversation away from deficit reduction and onto poverty and onto health care and housing and onto the environment, stuff that really matters to the 99 percent," demonstrator Peter Rugh told WCBS.

On Saturday, at least a dozen protesters were arrested in New York City as some 300 people observed the anniversary.

Rallies to mark the anniversary are being held today in about 30 other cities worldwide.

In San Francisco activists say they plan to take to the streets with a march Monday afternoon from Justin Herman Plaza to the city's Financial District, and then with an evening rally outside the Bank of America building on California Street, the site of previous protests.