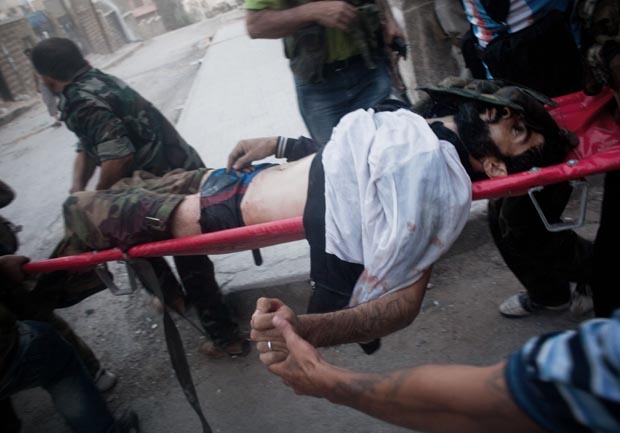 (CBS/AP) BEIRUT - The death toll from a car bomb in Syria's largest city has risen to 30, state media said Monday, as the new international envoy to the country said the Syrian people are desperate to see peace and stability.

The Sunday night blast ripped through the northern city of Aleppo, which has become one of the main battlegrounds of the country's civil war. Activists say at least 23,000 people have been killed since the conflict erupted in March 2011.

On Monday, the new U.N.-Arab League envoy, Lakhdar Brahimi, said he will travel to Syria this week to meet with regime officials as well as civil society.

"I answer to no one except the Syrian people," Brahimi told reporters in Cairo, where he was meeting with Arab League officials and Egyptian President Mohammed Morsi. "Syrians aspire to peace, stability and to realizing their goals of freedom and political progress."

Brahimi, who is tasked with brokering a diplomatic solution to the conflict, replaced former U.N. Secretary-General Kofi Annan, who stepped down in August in frustration after his six-point peace plan collapsed.

Also on Monday, U.N. Secretary-General Ban Ki-moon urged the world's foremost human rights body to keep up the pressure on major powers to end the civil war and rights abuses in Syria.

At the opening of the U.N. Human Rights Council's monthlong session, Ban told diplomats that he was "deeply troubled by the aerial bombardments of civilians by government forces; by the increasing sectarian tensions; by the deteriorating humanitarian situation; and by the apparent choice of both sides to pursue a solution through force rather than dialogue."

The U.N. chief called on all nations, including the 47 that are members of the Geneva-based council, to unite behind the efforts of his special envoy to Syria, but also to "maintain its vigilance on Syria, including on the question of accountability" for suspected abuses.

The fight for Aleppo, a city of 3 million that was once a bastion of support for President Bashar Assad, is critical for both the regime and the opposition. Its fall would give the opposition a major strategic victory with a stronghold in the north near the Turkish border. A rebel defeat, at the very least, would buy Assad more time.

The blast happened near two hospitals. According to Aleppo-based activist Mohammed al-Hassan, one of the hospitals, Al-Hayat, was turned into a site for the treatment of government troops shortly after the fighting in Aleppo began in July.

SANA also reported that the blast was caused by a small truck rigged with more than 2,200 pounds of explosives, which left a crater 6 meters (20 feet) deep.

SANA blamed terrorists, the term the regime uses for rebels, for the attack. But there was no immediate claim of responsibility from the rebels or any other group.

Some opposition activists disputed the SANA claim that the dead were all civilians. The Britain-based Syrian Observatory for Human Rights, citing hospital sources that it did not name, said members of the military were among the dead.

It was impossible to confirm the claims. Syria heavily restricts media access to the country, making official media and activist reports crucial sources of information.

As CBS News correspondent Charlie D'Agata reports, the Syrian opposition is fighting not just on the battleground. It is also fighting from outside Syria -- an information war.

From a secret location in Jordan, a handful of journalists are risking everything to make sure the world doesn't turn its back on Syria.The opposition channel Syria al-Shaab - meaning Syria of the people - broadcasts powerful and graphic amateur video and live reports from inside the war zone. (Watch report below):