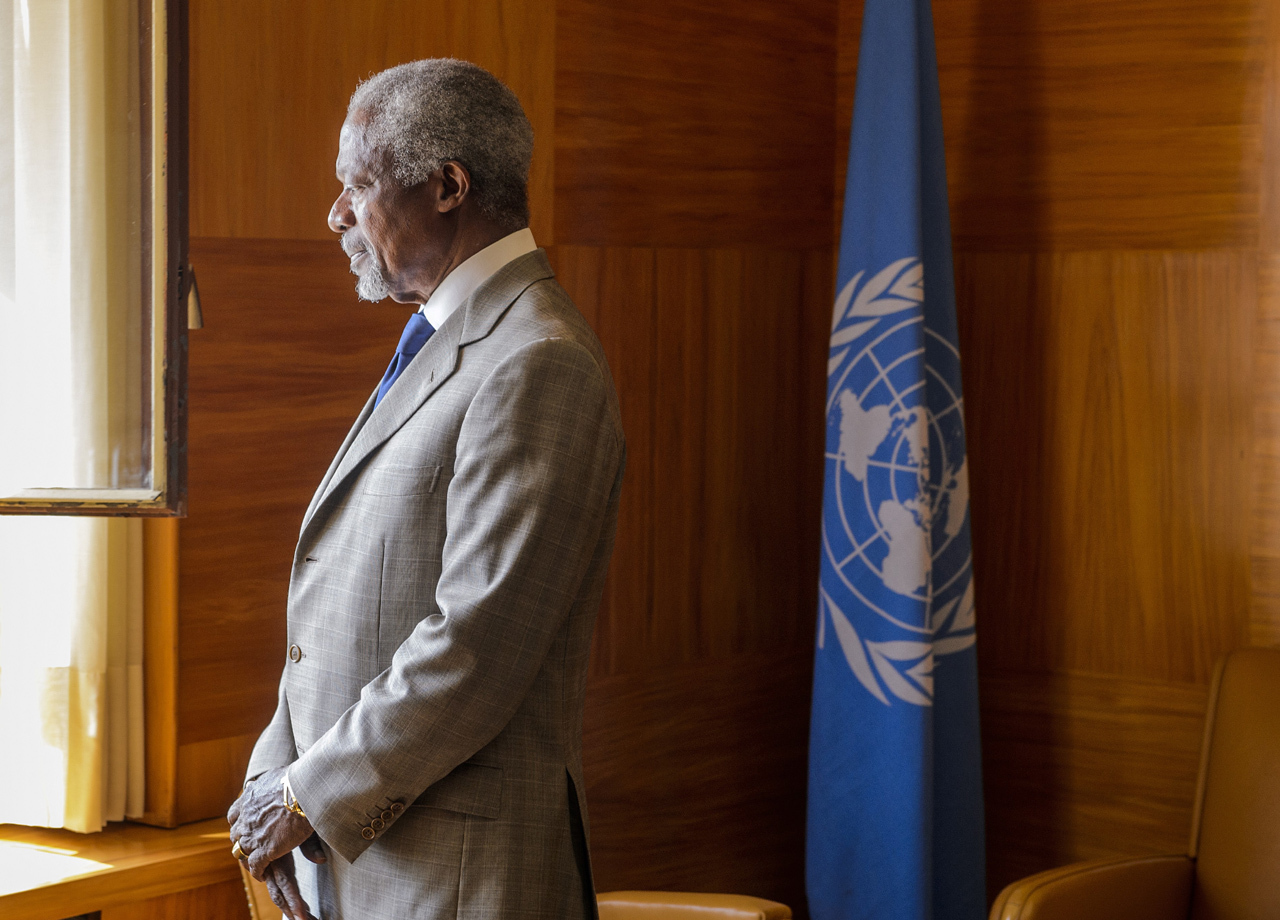 (CBS News) After years as the U.N.'s "Man In The Middle," Kofi Annan is taking a break. First as Secretary-General, and most recently as special envoy to Syria, he has wrestled with some of the world's most difficult problems. Now, in an interview in Geneva with Clarissa Ward, Kofi Annan looks back:

He is one of the most well-known players on the world stage, respected for his unwavering commitment to international diplomacy, but also fiercely criticized for failing to stop the bloodshed in Rwanda, Bosnia, and most recently in Syria.

In his new book, "Interventions," former U.N. Secretary General Kofi Annan attempts to shape how history will remember his 40 years at the United Nations: "Well, I hope that it will be said that, 'He made a contribution.'"

Annan's name will forever be attached to some of darkest chapters in the U.N.'s history. He was the head of U.N. peacekeeping forces when some 800,000 people were killed in Rwanda.

The next year, more than 8,000 Bosnian men and boys were slaughtered in Srebenica, which had been designated a so-called U.N. safe area.

"You said with regards to Rwanda and Bosnia, 'We patently failed or were seen to have failed,'" said Ward. "Do you believe that you failed?"

"Of course, we failed," Annan said. "Not only that, I apologized, on behalf of the U.N. and on my own behalf."

Annan writes that the experiences of Rwanda and Bosnia pushed him to try to shape the U.N. into an organization that would "step up rather than stand by."

"We've intervened to make life easier for people living with HIV/AIDs," he said, "in the cases of tsunami in Indonesia or earthquake in Pakistan, and on health issues, where the Avian Flu broke out in Asia."

"Do you think perhaps the United Nations is better equipped to deal with issues like disease and development rather than conflict?" Ward asked.

But he has spent most of his life trying to overcome those limitations.

"We are the only organization with the universal convening power that can bring every country under the sun in one conference room and say, 'Let's discuss this.' It's not a perfect organization but it's the best we've got."

His original home was the West African nation of Ghana. At the age of 18 he gained a scholarship to Macalester College in Minnesota. From there it was on to the U.N., where he became known for his mild-mannered brand of diplomacy.

Has he ever lost his temper? "Sometimes," he admits, "but not by pounding the table. But those who know me can tell when I'm upset. They see it in my eyes, and sometimes there's a certain edge to the voice."

In his role as Secretary General, Annan has sat down with some of the most brutal dictators, including Saddam Hussein.

When asked his impression of the Iraqi leader, Annan said, "Not what one would expect. He was calm. Hardly moving his hands. Which is unusual in the region. Makes you wonder, 'Can this man sitting here sit, talking calmly and yet is so capable of all the things that we know he has done?'"

It was the 2003 war in Iraq that perhaps proved the greatest threat to the U.N.'s authority. The Security Council was pushed out of the way by the U.S. and its allies. The war commenced without the Council's permission.

"Today, despite the best efforts of the international community and the United Nations, war has come to Iraq for the third time in a quarter-century," Annan said in 2003.

Ward asked him, "Do you think that the invasion of Iraq, in some ways, almost jeopardized the very existence of the United Nations?"

"It brought very serious tensions in the organization, and tensions that took quite a while to heal," he replied. "But I think that was the finest moment of the Council, to refuse to support a war that, in my judgment, was illegal."

Despite his strong objections to the war, Annan sent one of his top lieutenants and a close friend, Sergio de Mello, to manage its aftermath. When a suicide bomber hit a U.N. meeting on August 19, 2003, 22 people were killed, including de Mello.

"So for him to be blown away, the way it was, was so painful. And I don't think many people knew my - the agony, the pain."

At the end of 2006, Annan stepped down as Secretary General. But this year he took on one final mission: to act as the U.N.'s special envoy to Syria, where a brutal conflict has left 20,000 people dead in the last 18 months.

Annan drew up a six-point peace plan that called for an immediate ceasefire and the beginning of talks, but the ceasefire didn't hold.

"I've spent a lot of time on the ground inside Syria," said Ward. "I'm not going to sugar coat this for you. What began as a disappointment with the United Nations on behalf of the opposition has now turned into outright animosity, and I've seen and heard people chanting slogans against you."

"A mediator is not brought on board to join one camp or the other. The mediator's role is to find a way out of the conflict," he said.

In July Annan announced that he was stepping down from his role in Syria: "I did what I could. I did not resolve the conflict. The effort has failed."

"When you look back at all the lessons that were learned from Rwanda, from Bosnia in the mid '90s, and yet here we are in 2012 in Syria, and it feels like we're back to square one," said Ward.

"Yeah, says something about us human beings, doesn't it?" Annan replied. "Do we ever learn? Is it in our DNA to keep fighting each other?"

Annan now plans take a step back from diplomacy and concentrate on some projects that will allow this very private man some peace and quiet - something that his work has not.

Ward asked, what is next for Kofi Annan?