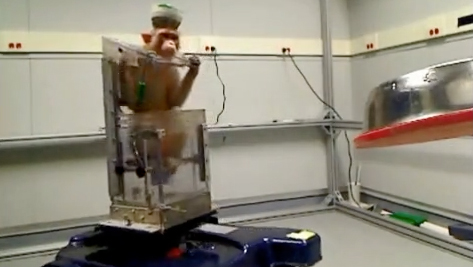 Are we getting closer to the plot of "Planet of the Apes?" Scientists have designed a new wireless brain-machine interface (BMI) that gives monkeys the ability to control a wheelchair using just their minds.

A new Duke University-led study, published in Nature's Scientific Reports, details how it was done. Researchers implanted microelectrode arrays in the brains of two rhesus monkeys, in areas that control limb movement and planning. Then the wireless BMI translated their cortical activity to direct the speed and direction of the robotic wheelchair.

The research is significant in that it could eventually be used to help people who are paralyzed get around, either with a high-tech wheelchair or more advanced robotic devices.

The researchers initially acquainted the monkeys with the technology by having them driven around in the wheelchairs. The monkeys' brain activity was recorded while this happened, and the information was eventually used to create an algorithm for instructions for steering the chair.

After these initial tests they then moved on to brain control -- looking to see how the simian test subjects could control the device themselves. They had each monkey wheel toward a bowl of fruit before them, with the animal's starting position in the room changing for different tests. The fruit always remained in the same position for each test.

It turns out that monkeys are excellent at mind control. The animals very quickly adapted to the technology. As the study puts it:

Prolonged BMI use leads to the assimilation of the artificial tool, e.g. robotic or virtual arms/legs, into the body representations found in the subject's cortex. Some evidence of such integration has been reported already for manually controlled wheelchairs. Our current observations of neuronal tuning to wheelchair kinematics and target distance after the transition to BMI control adds to these findings and suggests new directions for future scientific inquiries on how prolonged BMI operation affects cortical representation of the sense of self and the peri-personal space.

While these experiments seem to take a page or two out of science fiction, they have very significant real-world implications.

One of the study authors, Duke neuroscientist Miguel Nicolelis, leads the Walk Again Project, an international nonprofit that develops BMI-based technologies that can help those who have been paralyzed eventually control devices like artificial limbs. The group developed a mind-controlled exoskeleton used by a paralyzed patient to make the ceremonial first kick at the 2014 World Cup.

On his lab's website, Nicolelis says the research could also be adapted to help those with Parkinson's disease and epilepsy.