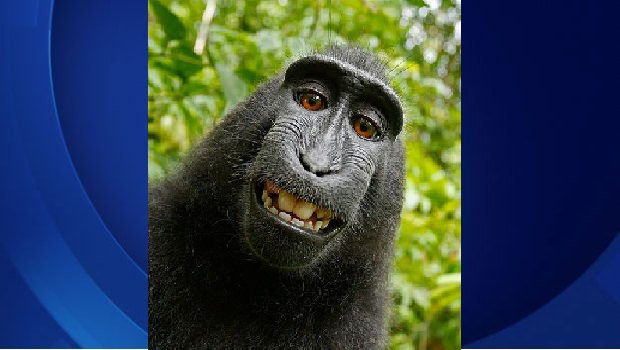 SAN FRANCISCO -- A federal judge in San Francisco said Wednesday he plans to dismiss a copyright lawsuit filed on behalf of an Indonesian monkey by an advocacy group that claims the animal owns the rights to a famous series of "monkey selfie" photographs.

"I just don't see that it could go as broadly as beyond humans," Orrick said during a hearing on a motion by Slater and Blurb for dismissal of the lawsuit filed against them in September by People for the Ethical Treatment of Animals on behalf of Naruto, a crested macaque.

The judge said he will issue a written order of dismissal at a later date.

But Orrick also said he will allow PETA to file an amended lawsuit if the group wishes to do so. PETA attorney David Schwarz told Orrick he plans to do that, and said outside of court that he will study the future ruling before deciding how to revise the suit.

The now 7-year-old Naruto lives with other macaques in a rainforest reserve on the island of Sulawesi, formerly known as Celebes, in Indonesia.

He took the selfies in 2011 with a camera that Slater, a British wildlife photographer, left in the reserve.

The lawsuit claims that Naruto, who was accustomed to seeing cameras used by tourists and professional photographers, came upon the unattended camera and created the selfies through a series of "purposeful and voluntary actions...unaided by Slater."

Slater's lawyers have contended in a filing that Slater set up the photos by "building a trustful, friendly relationship" with a group of macaques over several days and then making artistic decisions about the lens width, positions and settings on the camera he left in the reserve.

The soon-to-be dismissed current version of the lawsuit asked the court to declare Naruto the author, order all profits from sales of the selfies to be turned over to Naruto, and assign Virginia-based PETA and German primatologist Antje Engelhardt to administer the proceeds for the benefit of Naruto, other crested macaques and their habitat.

PETA and Engelhardt, an expert on Sulawesi crested macaques, would provide their services for free, the lawsuit said.

The plaintiffs in the lawsuit are Naruto, PETA as the monkey's legal "next friends," and Engelhardt. The defendants are Slater, Wildlife Personalities Ltd. and Blurb Inc.

The crested macaques are listed as a critically endangered species by the International Union for Conservation of Nature.

PETA President Ingrid Newkirk said in a statement: "As PETA has asserted for years, every animal deserves legal recognition for his or her ability to play, solve problems, and form families and friendships just as binding as that of human beings."