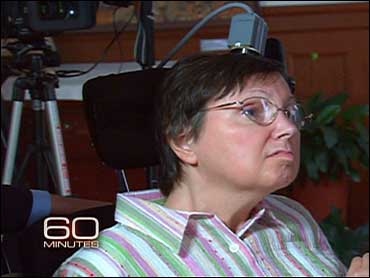 Once in a while, we run across a science story that is hard to believe until you see it. That's how we felt about this story when we first saw human beings operating computers, writing e-mails, and driving wheelchairs with nothing but their thoughts.

Quietly in a number of laboratories, an astounding technology is developing that directly connects the human brain to a computer. It's like a sudden leap in human evolution - a leap that could one day help paralyzed people to walk again and amputees to move bionic limbs. As correspondent Scott Pelley first reported last November, the connection has already been made for a few people, and for them it has been life changing.

Scott Mackler was a husband, father and successful neuroscientist when he received perhaps the worst news imaginable. At the age of 40, he could run a marathon in three and a half hours, but it was about that time he discovered he had ALS, Lou Gehrig's disease.

His brain was losing its connection to virtually every muscle in his body. The near-total paralysis would also stop his lungs. He didn't want to live on a ventilator, so nine years ago he recorded this message for his two sons: "I know the future holds lot of love and joy and pride and that life goes on and I'll be watching you along the way and I love you very much and I'll see ya."

Today, Scott Mackler's mind is sharp as ever, but his body has failed. Doctors call it "locked in" syndrome. Scott and his wife Lynn learned to communicate with about the only thing he has left, eye movement.

To signal "yes," Lynn says Scott looks at her; to signal "no," he looks away.

But recently Scott found a new voice. "Can everyone hear the PC? I apologize for the quality of the voice," he asked in writing.

Scott wrote these words, one letter at a time, with nothing but his thoughts and the help of what's called a brain computer interface or "BCI." He wears a cap that picks up the electrical activity of his brain and allows him to select letters simply by thinking about them. Then the computer turns his sentences into speech.

"I hate being helpless and when other people put words in my mouth," he wrote.

"Well, this is a very unusual interview for 60 Minutes. We've done something we never, ever do, and that is we've submitted the questions in advance because it takes Scott a little while to put the answers together using the BCI device," Pelley remarks. "Scott, I understand that earlier in the progression of this disease you said that, at the point you had to go on a ventilator you didn't wanna go on anymore, but today you are on a ventilator. And I'm curious about what changed your mind?"

"Because I can still communicate," Scott replied, with the help of the BCI device.

It isn't fast. It takes 20 seconds or so to select each letter. Scott told 60 Minutes it took him about an hour to write the answers to our 16 questions. But he writes well enough to continue his research and manage his lab at the University of Pennsylvania, where he still goes to work everyday.

"You use this system even to text your sons, for example. And I wonder what it would mean to your life today if the system somehow was taken away from you?" Pelley asks.

Asked what it has meant to their relationship, Scott's wife Lynn tells Pelley, "Well, he's happier. He can communicate with not just us, but with the world. This gave him his independence. His working, intellectual, scientist independence back."

To understand how the BCI works, Pelley asked researcher Theresa Vaughan to hook him up to the BCI device.

"And you'll see there are little white disks scattered around on your head," Dr. Wolpaw explained.

Those disks are electrodes that pick up the faint electrical activity that brain cells create when they communicate with each other. Vaughan put a conductive gel on top of Pelley's scalp to help the electrodes pick up the signals.

Pelley was thinking of the letters of a word that only he knew. Every time the computer flashed the correct letter on the screen, he silently thought to himself, 'That's it, that's the one.' That feeling of recognition set off a unique electrical pattern in his brain, which the computer picked up.

It worked the first time Pelley tried it, without a single mistake, spelling out "THOUGHT" with the help of BCI.

"You know, I can imagine some people watching this interview are thinking to themselves, 'Wait a minute, they're connecting the brain to a computer.' Are we moving in the direction of reading people's thoughts? Are we, is this mind control around the corner?" Pelley asks.

"No, No it is not - it is certainly not mind control and it's different from reading people's thoughts. And it's important to realize this requires the cooperation of the person," Wolpaw explains.

As remarkable as this is, some scientists believe this technology is limited, because putting electrodes on top of the scalp is like listening to a symphony from the street outside the concert hall. So what would happen if the electrodes were inside the brain?

That's what they're doing at the University of Pittsburgh, implanting electrodes inside the brains of monkeys. Andy Schwartz, a neuroscientist at the university, implanted a grid of electrodes. It's tiny, but there are 100 sensors, each listening to a different brain cell, or neuron.

It's like listening to the symphony of the brain, but now sitting in the front row. Schwartz has been decoding that language by watching the monkey's movement and recording the corresponding signals in its brain.

Asked what that tells him, Schwartz says, "So there's a relationship between how fast the neuron fires and the way the animal moves its hand. And we're trying to understand that relationship so that if we see a neuron firing we can say, 'Ah, the animal's about to make this kind of movement.'"

Once Schwartz started to figure out that relationship, he was able to connect the monkey's brain directly to a robotic arm. Within days, the monkey operated the arm as if it was his own. "The monkey has both arms restrained. And we're recording brain signals from its brain and it's using those brain signals to operate this entire arm," Schwartz explains. "As well as the gripper"

Schwartz says the monkey is operating the robotic arm with nothing but his thoughts. Asked what the chances are that a human would be able to do the same thing, he says, "Oh, we think a human being could do much better."

Cathy Hutchinson is well on her way to finding out: she's among the first humans to have her brain directly wired to a computer. Years ago, Cathy suffered a stroke that left her mentally sharp but trapped inside a paralyzed body and unable to speak, "locked in" like Scott Mackler.

Three years ago, Cathy volunteered to have the same kind of sensors Pelley saw in the monkeys implanted in her motor cortex, which controls movement and is located right on the surface of the brain. The sensors connect to the computer through a plug on her head. The system is called "Braingate" and it was created by a team led by Brown University neuroscientist John Donoghue.

"If you look at this square each one of these little black boxes is the electrical signal coming from one electrode in the brain," he explains.

Each one of the little black boxes is a neuron firing. "It's its electrical potential. It lets out a 1/1000th of a second pulse," Donoghue explains.

Asked how well we understand this language, Donoghue says, "We have a somewhat of an understanding. We know that there's a general pattern of, for example, left/right, up/down, even fast or slow."

Dr. Leigh Hochberg of Massachusetts General Hospital is leading the clinical trial. Pelley watched as Cathy showed what she can do.

She was able to move a cursor with nothing but her mind. "She's thinking about the movement of her hand, and she's moving the cursor much as if she had her hand on a mouse," Hochberg explains.

So if a paralyzed patient thinks to move his or her left arm, Donoghue says the brain fires those neurons, even though the arm doesn't move. "It's very surprising. It fires, even though you're not moving," he says.

Moving the cursor with her mind is not as fluid or direct as using a mouse. While 60 Minutes was there, the cursor meandered a bit, sometimes overshot, but Cathy always hit her target in the end: clicking the cursor on a logo to play music.
"That's pretty amazing. And so, if Cathy can control a cursor, she can control anything a computer is connected to?" Pelley asks.

"The lights, the temperature in the room, even, even a wheelchair at some point," Pelley adds.

In fact, Cathy has already driven a wheelchair. They haven't let her ride in it yet for her own safety, but with monkeys adopting robot arms and a completely paralyzed person driving a chair, imagine where this could be headed.

Donoghue envisions this technology will go beyond helping people communicate.

He believes that amputees will one day be using BCIs to control robotic arms, and those with paralysis will be able to move their own arms and legs again. "In spinal cord injury, that cable that connects the brain to the spinal cord is broken. We can reconnect that brain, not to the spinal cord, but directly out to the muscles with a little computer that's making up for all the lost parts. And we'll see people be able to do things like reach out, hold onto a cup, bring the cup to their mouth and have a sip of water," he says.

As a neuroscientist, Scott Mackler also believes that day will come. His skullcap interface is a machine that has given him back his humanity. He's continued to publish scientific papers and to speak his mind. "Live life to the fullest. My wife and I now speak everyday of how we have no regrets," he says.

As our interview ended, Scott Mackler asked Pelley to play a PowerPoint presentation he made to make sure that he got the last word.

"So I'm going to roll that now and see what he has to say," Pelley remarked.

"Please don't think that I'm an inspiration, because anyone could do what I've done," Scott said.

"Scott keeps talking about not being courageous. I don't particularly think that is true," Pelley commented.