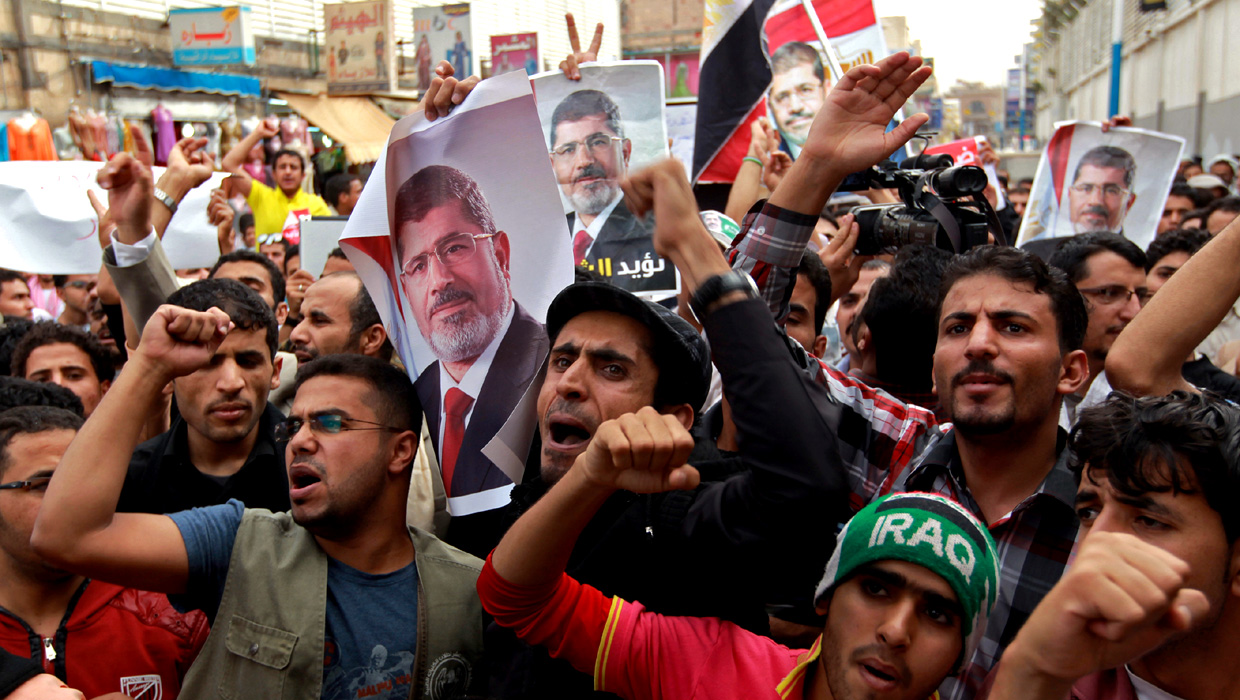 Morsi's Muslim Brotherhood denounced Saturday's bloodshed as evidence of the brutality of the military-backed regime. But many accused the group's leaders of trying to capitalize on the loss of life to win sympathy after millions took to the streets in a show of support for the military chief who ousted Morsi in a coup.

Gen. Abdel-Fattah el-Sissi said he would take the popular support as a mandate to deal with violence and "potential terrorism" - a thinly veiled reference to a widely expected crackdown on Morsi supporters in the sit-in camps in Cairo and against radical Islamists in the Sinai peninsula who have been waging deadly attacks against security forces since Morsi was ousted in a July 3 military coup.

The coup followed days of mass protests by millions of Egyptians demanding that Morsi step down after a year in office as Egypt's first elected president. The monthlong sit-ins have been the launch pad of street protests that often ended violently when Morsi's supporters clashed with opponents or security forces.

The real fear is of this pending military action to try to dismantle the protest camp where thousands of Morsi supporters have been staked out since he was deposed earlier this month, reported CBS News correspondent Clarissa Ward Sunday morning.

The demonstrators told Ward they were "willing to face down tanks and even willing to died to protect their right and to continue to call for their Morsi to be re-instated," she reported.

Islamists led by the Brotherhood staunchly reject the new post-Morsi leadership and insist the only possible solution to the crisis is to reinstate him. Meanwhile, the interim leadership is pushing ahead with a fast-track transition plan to return to a democratically elected government by early next year.

The Brotherhood, accused by critics of trying to monopolize power during Morsi's year in office, routinely claims its supporters are killed in cold blood by army troops, police or thugs sponsored by the Interior Ministry, which is in charge of police. However, witnesses and videos posted on social networking sites show that Morsi's supporters consistently use rocks, firebombs and firearms against opponents, who behave similarly.

The Brotherhood's tactic is clearly designed to win sympathy at home and abroad by portraying itself as a victimized party pitted against an army and a police force armed to the teeth.

"We urge the United Nations, the international human community ... to come down and rescue the hundreds of thousands from the massacre by the live ammunition in the hands of the criminals," senior Brotherhood leader Mohammed el-Beltagi shouted from the stage at the larger of the two Cairo sit-ins.

"We want intervention by the international organizations ... to rescue the people. We urge the Egyptian people to come to our rescue. ... The people are slaughtered like sheep",'' declared el-Beltagi, who has an arrest warrant issued against him for inciting violence.

Mohammed Badie, the Brotherhood's supreme leader, launched a stinging attack on el-Sissi over the latest violence, saying the military chief was leading a "bloody regime" and urging his followers to stand fast.

"Don't be sad and don't despair," he said in a message that heavily quoted from the Quran, Islam's holy book. Posted on the Brotherhood's website, Badie said those killed in the latest violence were martyrs who will be rewarded with a place in heaven.

U.S. Secretary of State John Kerry issued a strongly worded statement telling Egyptian authorities it was "essential" they respect the right to peaceful protest and calling on all sides to enter a "meaningful political dialogue.

Catherine Ashton, the EU's foreign policy chief, arrived in Cairo on Sunday for her second visit to Egypt this month, a sign of the alarm felt in the West over the continuing bloodshed. She was to meet Egyptian leaders on Monday.

The U.N.'s human rights chief, Navi Pillay, also condemned the violence and called for a "credible, independent investigation" into the killings.

"I fear for the future of Egypt if the military and other security forces, as well as some demonstrators, continue to take such a confrontational and aggressive approach. Supporters of the Muslim Brotherhood have the right to protest peacefully like anyone else," Pillay said.

Interior Minister Mohammed Ibrahim warned security forces would deal decisively with any attempts to destabilize the country. Ibrahim accused the pro-Morsi side of provoking bloodshed to win sympathy and suggested authorities would move against the two pro-Morsi protest camps outside the Rabaah al-Adawiya mosque in eastern Cairo and in Nahda Square, near the main campus of Cairo University.

"I assure the glorious people of Egypt that the police are determined and capable to maintain security and safety to their nation with the support of the sincere sons of the country," Ibrahim said during a graduation ceremony at the national police academy. "We will very strongly and decisively deal with anyone who attempts to undermine stability."

He depicted the two encampments as a danger to the public, pointing to nine bodies found nearby in recent days. Some had been tortured to death, police said, apparently by sit-in participants who believed they were spies. "Soon we will deal with both sit-ins," he said.

Setting the stage for more confrontation, the military-installed interim president gave the prime minister the power to grant the military the right to arrest civilians in what government officials suggested was a prelude to a major crackdown on Morsi's supporters or Islamic militants who have stepped up attacks against security forces in the Sinai Peninsula.

At least 20 members of the security forces have been killed in Sinai by suspected militants and nearly 250 in the rest of the country, including the 83 killed in Cairo on Saturday.

"The more bloodshed there, the more it is impossible to reach a compromise or middle ground," said Kamal Habib, a prominent scholar in Islamic movements and a former Islamist himself.

The two sides, he said, were gearing toward more confrontations.

A senior aide to interim President Adly Masnour, meanwhile, sought to prepare the public for possible action to dismantle the sit-in camps, telling reporters that Morsi's supporters were armed, terrorizing residents in the area.

"It has now become inevitable for the state to take measures necessary to protect society," he said.

The nation's highest security body - the National Defense Council - issued a statement saying the pro-Morsi sit-in camps violated Egypt's national security and warning that "decisive and firm" action would be taken. It also urged the protesters to renounce violence and stop "violence and terrorism and verbal and physical assaults on citizens."

The council, chaired by the interim president and including the prime minister, defense and foreign ministers, said it deeply regretted the loss of life, but did not blame any party for it.

Saturday's clashes - the deadliest since more than 50 Morsi supporters were killed by troops on July 8 - took place before dawn when police and armed men in civilian clothes opened fire on supporters of the former president as they tried to expand their sit-in camp outside Rabaah al-Adawiya by moving onto a nearby main boulevard.

Civilians, sometimes with weapons, frequently join police in Cairo demonstrations. In some cases, they appear to be plainclothes police, in others residents who back the security forces.

Videos posted Sunday on social networking sites showed the Morsi supporters approaching a police line backed by armored vehicles at the entrance of the ramp to a key bridge that runs across the heart of the city. They also showed police and men in civilian clothes pointing their rifles at the protesters, many of whom wore industrial helmets and homemade body armor and stood behind makeshift barricades.

Mohamed Wasfi, a children's book publicist who videotaped the clashes from his apartment balcony, said the protesters attempted to spill oil on the street to stop cars from approaching the bridge, a tactic used by Morsi supporters last week on an overpass that leads to Cairo's international airport. Shortly afterward, another group of protesters approached the police line and tore down metal barricades, prompting police to fire tear gas, he told The Associated Press.

He said some protesters fired birdshot at the police, who responded with birdshot and tear gas.

Another video, posted by the Interior Ministry, showed protesters hurling stones and firebombs at the security forces from behind their barricades. One masked man was shown shooting at the police with what appeared to be a large silver-plated pistol. The authenticity of the videos could not be independently verified, but they generally conformed with AP reporting.

No army troops were on the scene, but the international community and human rights groups expressed concern the military had allowed the carnage to occur.

Human Rights Watch said many of those killed were shot in the head or chest and the killings took place over several hours. The New York-based group said it spoke to witnesses and reviewed extensive video footage of the events. It said medical staff said some of the deaths appeared to be targeted killings because the position of the shots would likely result in death.