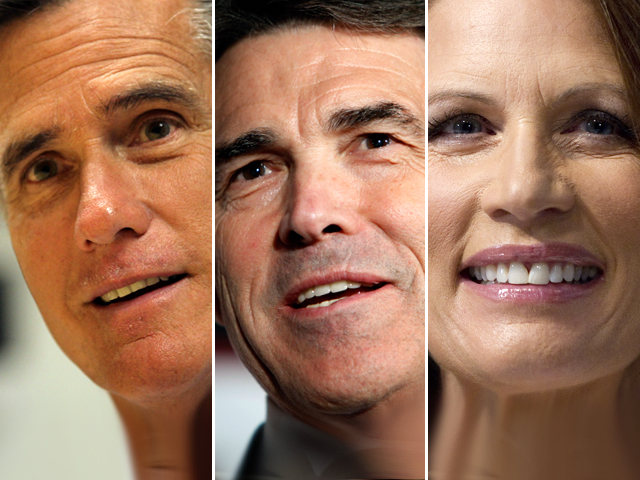 In the wake of the Iowa straw poll, there are three frontrunners for the Republican presidential nomination: Former Massachusetts governor Mitt Romney, Texas governor Rick Perry and, to a lesser extent, Minnesota Rep. Michele Bachmann.

Romney and Perry can both make a credible case that they could be better stewards of the economy than President Obama: Romney thanks to his business experience, and Perry due to Texas' impressive record on job creation. But both have their weaknesses.

Romney is viewed skeptically by many Tea Partiers and social conservatives, who question his conservatism because he signed an individual mandate-based health care law in Massachusetts and once held moderate positions on abortion and gay rights.

(At left, Brian Montopoli breaks down the state of the GOP race.)

Perry, meanwhile, is untested on a national stage, and he has a closetful of issues that could cause him problems. Among them: His decision to sign an executive order requiring that sixth-grade girls in Texas be vaccinated against the human papilloma virus - to the horror of many social conservatives, who worried that such a vaccination would encourage promiscuity - and his close ties to some fringe evangelical figures, which could turn off moderates.

One advantage Perry brings, however, is his appeal both to the establishment Republicans drawn to Romney and to the social conservatives who drove Bachmann to victory in the straw poll. Bachmann's narrow win in Iowa gave her candidacy a boost, but it wasn't enough to put to rest questions about whether her appeal is too limited to make her a serious contender.

Perry is now facing a two-pronged battle: Against Romney for the support of the establishment, and against Bachmann for the hearts and minds of the base - and, by extension, a victory in the Iowa caucuses. Provocatively, Perry made his first appearance in Iowa Sunday night in Bachmann's hometown of Waterloo, where the two shared the stage at the Black Hawk County Republican Party's Lincoln Day dinner.

Perry was the far better retail politician, oozing Texas charm as he worked the room for a full hour before his speech, as CBS News' Bonney Kapp reports. His speech, which stressed his Texas roots and military service, was informal and seemed charmingly off the cuff. Perry didn't interact with Bachmann, who did not enter the room until five minutes after she was announced, forcing the announcer to reintroduce her. Bachmann said she missed Perry's remarks because she had been at a family reunion; she closed her standard stump speech by giving away an apple pie to the oldest Republican mother in the room.

A lot could still happen before the voting starts. But barring any major shakeups, Perry could effectively turn the race into a head-to-head matchup with Romney if he can defeat Bachmann in the first-in-the-nation Iowa caucuses, where the GOP electorate is dominated by born again and evangelical voters. The caucuses are currently scheduled for February, though the calendar remains in flux.

Romney is treading carefully in Iowa, where he was embarrassed by the underfunded Mike Huckabee in the 2008 cycle. With an eye on the general election, he plans to compete in the state while managing expectations for what will likely be a Perry or Bachmann victory. For Romney, the key test comes in New Hampshire, the second state on the primary calendar.

The Granite State, of course, is right next to Romney's home state of Massachusetts, and Romney has a summer home there; if he doesn't win the state, where the libertarian-leaning electorate is more focused on fiscal issues than social ones, his candidacy is likely over. Romney's biggest threat in the state may be Jon Huntsman, another Mormon and former governor who is expected to go all in in New Hampshire in hopes of upseting Romney and kick-starting a candidacy that has yet to really get off the ground.

Perry's infant candidacy is grounded in offering simple, straightforward messages like "Don't spend all the money!" Like Romney, he's courting the business community - and the tens of millions in donations that come with it - by calling for a low tax burden for "the job creators" and a "fair and predictable" regulatory climate. His argument against Bachmann is grounded in electability: "The most important thing that we do," he told Republicans on Sunday, is "have a candidate that can beat Barack Obama in November." His implication, of course, is he's just that candidate - and the polarizing Bachmann is not.

Romney has sought to differentiate himself from Perry in part by stressing that he has not spent his whole life in politics. (Perry has served as governor for a decade, and before that worked his way up through the state's political ranks.) At the Iowa state fair last week, he said he spent "only" four years as a politician and didn't "inhale politics."

Perry can counter by contrasting job creation records: While Texas has led the nation in new jobs in recent years, Romney's Massachusetts ranked near the bottom of the country in job creation.

Romney was able to skate through Thursday's GOP debateas Bachmann and Tim Pawlenty, who dropped out of the race Sunday after a disappointing third-place finish in the straw poll, got into a nasty slugfest. But with five debates coming between Labor Day and mid-October, Romney won't be able to avoid attacks from his rivals much longer.

The second tier of GOP candidates is composed of Huntsman, social conservatives Rick Santorum and Herman Cain, and libertarian Congressman Ron Paul, who lost the straw poll by just 152 votes. Santorum and Cain have thus far lost out to Bachmann in becoming the candidate of choice for social conservatives, while Paul's support, though passionate, seems to have a ceiling in the low double digits. The cash-strapped Newt Gingrich, meanwhile, may not be long for the race.

The biggest wildcards still out there are Sarah Palin, who just happened to show up in Iowa over the weekend, and New Jersey Governor Chris Christie, who insists he isn't going to enter the fray despite the continuing appeals of many Republicans. If either Palin or Christie jump in, the race will be turned on its head. If not, Romney, Perry and Bachmann will likely be the main contenders for the nomination, with Romney and Perry the most likely to emerge to take on President Obama in the general election.