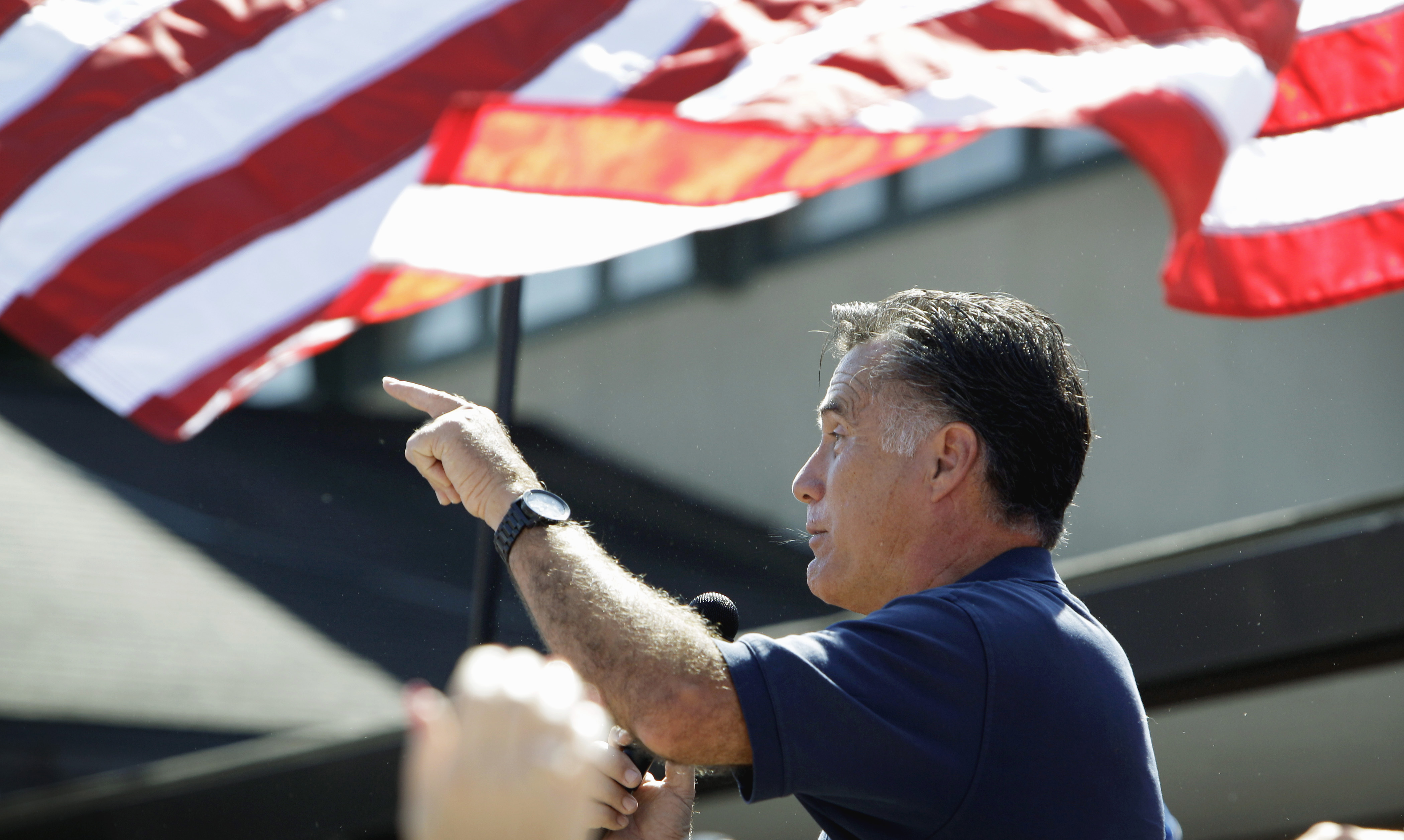 DES MOINES, Iowa - Not long after Republican presidential candidate Mitt Romney began taking questions following his stump speech at the Iowa State Fair Thursday, he got into something of a shouting match with a liberal heckler who Romney at one point implored simply to "let me talk."

The questioner, who identified himself afterward as Joe Fagan of Des Moines, was one of a group of liberals who positioned themselves in front of the stage and interrupted Romney as he tried to answer questions.

One member of the group asked Romney if he supports raising the cap on Social Security taxes so "rich people pay their far share" in taxes. Romney responded with a line that garnered applause from the 200 or so Iowans gathered around him: "There was a time in this country that we did not celebrate attacking people based on their success."

When Romney began addressing entitlement programs, Fagan started shouting over him, discussing how he is on Social Security.

Fagan shouted: "You came here to listen to the people!"

In the crowd, where people were visibly disgusted with the hecklers, a chant of "Romney" went up. Finally Romney gave up, saying, "just let him talk, go ahead."

Fagan, his voice hoarse, asked what Romney would do to "strengthen Social Security, Medicare and Medicaid without cutting benefits."

Romney then seemed to taunt Fagan, saying: "You've had your chance - anything else you want to say?" Replied Fagan: "Well, I want to see what you're going to say." The crowd laughed.

"The way this is going to work is you get to ask your question and I get to give my answer," Romney replied. "If you don't like my answer you can vote for someone else."

"You ready for my answer? I'm not going to raise taxes," Romney continued. "That's my answer...and if you want somebody that can raise taxes you can vote for Barack Obama." As Romney went into an attack on Mr. Obama for "killing this economy," the hecklers began chanting "Wall Street greed."

At another point, in an effort to quiet the hecklers, Romney said, "We've got some people who want to raise taxes. How many people here agree with that?" The response was a chorus of boos. One woman shouted from the back of the crowd: "Get a job!"

Romney seemed to view the hecklers as plants; he asked them at one point, "Who are you working with?"

At the outset, Romney took the stage dressed in his newly casual style: Shirt-sleeve collared shirt, brown slacks and a belt. Despite his four years as Massachusetts governor and past four years as a de facto presidential candidate, he cast himself as a "citizen," not a politician, who, unlike Mr. Obama, "spent time in the real economy."

Romney said he spent "only" four years as a politician and didn't "inhale politics." He called the president a "fine fella, but he's out of his depth and he doesn't understand how the economy works." Nothing the president has done in office, Romney claimed, has created jobs.

In a line that was quickly seized by Democrats, Romney at one point said "corporations are people" as part of a response to a question from an audience member, who asked if he believed Social Security should be a part of deficit negotiations.

"Corporations are people, my friend," he said. "...Of course they are."

"Everything corporations earn ultimately goes to people," Romney continued, prompting guffaws from the liberal hecklers. "Where do you think it goes? Whose pockets? People's pockets. Human beings, my friend."

Democratic National Committee Chair Debbie Wasserman Schultz quickly released a statement calling the comments "a shocking admission from a candidate--and a party--that shamelessly puts forward policies to help large corporations and the wealthiest Americans at the expense of the middle class, seniors, and students."

Romney's biggest applause came when he called for the country not to spend more money than it takes in; he closed his remarks by hailing American patriotism as a staffer waved an American flag behind him.

After Romney spoke, he walked over to the fair's "Iowa Pork Tent," where he put on a red apron and, joined by Sen. Chuck Grassley, flipped barbecuing pork for the cameras.

Larry Beyer of Marengo, Iowa, who is camping at the fair, said after Romney's speech that he "liked the way he handled the hecklers."

"And he didn't run anybody down of the other candidates," Beyer continued. "I'm going to watch him a lot closer than I have in the past."

Beyer's wife, Nancy Beyer, also had kind words for the candidate, who has decided not to make a hard push to win Saturday's straw poll. Romney spent lavishly to win the straw poll in the 2008 cycle but went on to lose the Iowa caucuses to Mike Huckabee.

"I thought he came across in person much smarter and more capable than anything I've seen on TV," said Nancy Beyer. "He's too canned and dry on TV and that concerned me. Here, when he had to handle the hecklers and all of that, and state his policy in a very short time, he was impressive."