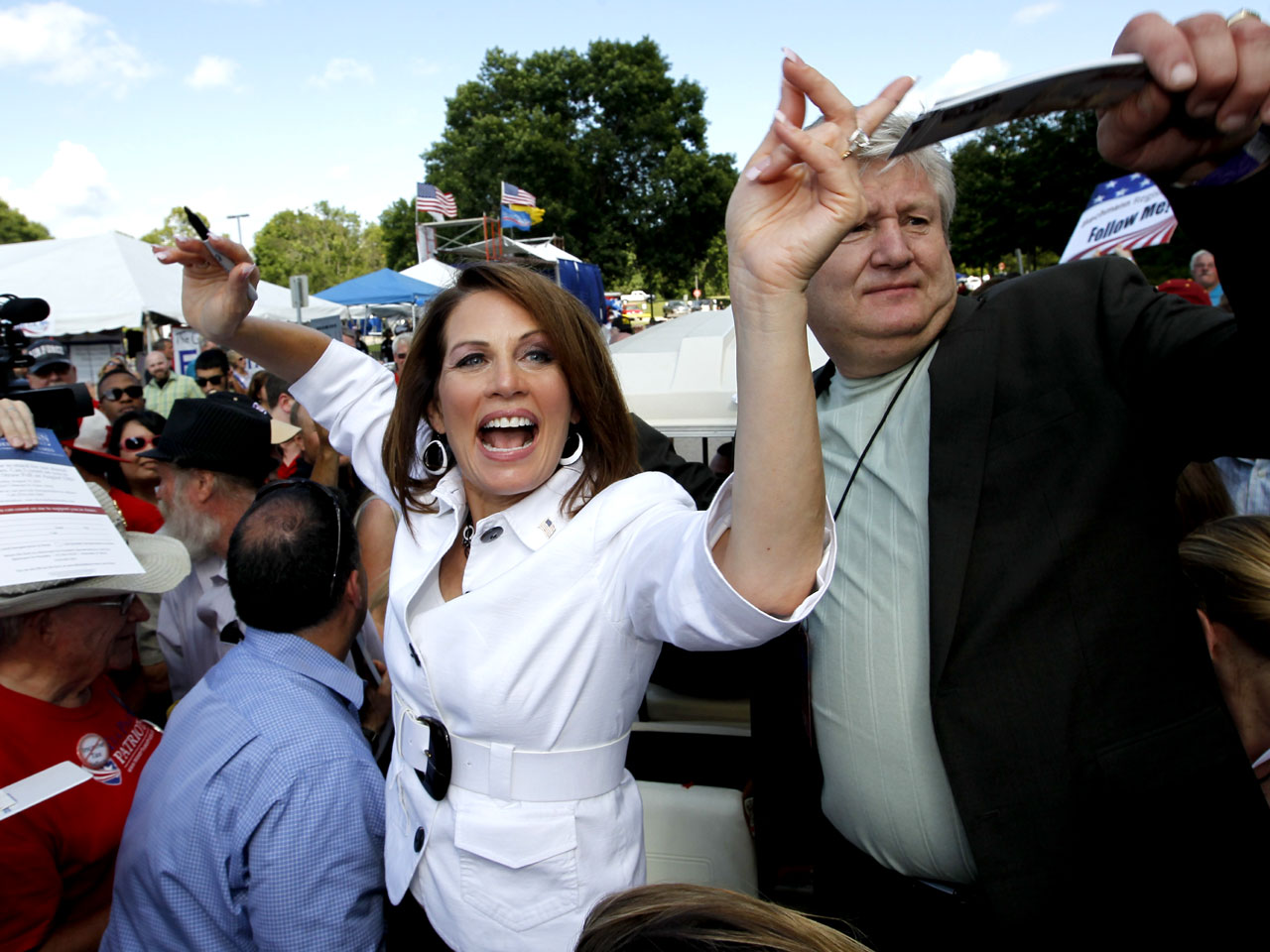 "Now, it's on to all 50 states!" Bachmann said immediately after the results were released. Appearing on Fox News, Bachmann said she "just crossed a very important hurdle, but it's the first one." She described herself as "stunned and humbled and thankful and grateful and all the rest."

"Now we turn our attention toward winning the Iowa Caucuses and taking our message of reining in wasteful spending, keeping taxes low, growing our economy and creating jobs to the people of New Hampshire, South Carolina and all 50 states," Bachmann added in a statement.

Bachmann took 4,823 votes out of 16,892 votes cast, just ahead of Paul's 4,671. Pawlenty, who essentially went all in on the straw poll in an attempt to change the narrative of his struggling campaign, got just 2,293 votes, less than half of his fellow Minnesota lawmaker.

"Congratulations to Congresswoman Michele Bachmann for her victory in today's straw poll," Pawlenty said in a statement after the announcement. "We made progress in moving from the back of the pack into a competitive position for the caucuses, but we have a lot more work to do. This is a long process to restore America -- we are just beginning and I'm looking forward to a great campaign."

Iowa Straw Poll: A carnival that kills campaigns
Primer: What is the straw poll

In fourth place was Rick Santorum with 1,657 votes, followed by Herman Cain with 1,456 votes. Write-in candidate Rick Perry, who formally entered the race today, got 718 votes, good enough for sixth. Despite being a write-in candidate, he beat out Mitt Romney with 567 votes, Newt Gingrich 385, Jon Huntsman with 68 votes and Thaddeus McCotter with 35 votes.

Also not seriously contesting the straw poll but on the ballot were Huntsman, whose moderate views are a poor fit with Iowa's socially-conservative GOP electorate; and Gingrich, who spoke here but who lacked the resources to make a serious push for victory.

In a speech shortly before the voting closed, Bachmann, an Iowa native, stressed her social conservatism, hailing Iowans for voting out of office a trio of judges who ruled in favor of same-sex marriage. The straw poll was particularly important for the Minnesota representative, who sought to build on her early buzz and prove to a skeptical Washington establishment that she is not an unelectable candidate with narrow appeal. Bachmann's campaign focused aggressively on the straw poll, with the candidate crisscrossing the state imploring supporters to attend with promises of a performance by Randy Travis and others.

The straw poll was even more crucial for Pawlenty, for whom it marked perhaps the last, best chance to turn around what has so far been a disappointing campaign. Pawlenty was initially expected to be perhaps Romney's strongest challenger for the nomination, but his campaign failed to catch fire, with polls showing his support never moving out of the single digits.

Pawlenty bussed in supporters who signed a pledge to vote for him, offering them free "Famous Dave's" barbecue and green Pawlenty t-shirts with the number 12 on the back. In a speech here, he condemned President Obama as having "no clue" what America needs and saying he needs to "get the government off our backs."

Pawlenty will now likely face growing calls to leave the race -- and, more crucially, will have a hard time raising the funds he needs to keep his campaign moving forward.

Paul spent more than any other candidate for a prime spot at the straw poll, and his young supporters came out in force for the Libertarian-leaning candidate, cheering him wildly as he called for a return to the gold standard  and an end to legal abortion and American military intervention abroad. Joined here by his son, GOP Sen. Rand Paul of Kentucky, Ron Paul hoped a strong showing would help give him credibility as a serious candidate. When the results were announced, his supporters chanted "Ron Paul" and held up signs supporting the longtime Texas congressman.

Santorum and Cain hoped the event would help convince donors that they had a legitimate chance at the nomination despite seemingly long odds. Cain has largely faded despite early buzz amid a series of gaffes and campaign turmoil, while Santorum has sought victory on a platform of unblinking social conservatism at a time when many voters are more focused on fiscal issues. Santorum said immediately after the results that he had beat expectations in light of how much his rivals had spent to bring in votes, and he vowed to stay in the race.

The straw poll results were announced just hours after Texas Governor Perry announced his entry into the race in South Carolina with a broadside against President Obama.  Perry is expected to be a strong contender for the nomination, one with the potential to combine establishment support (and the strong fundraising that comes with it) with the backing of social and fiscal conservatives. Perry supporters worked to get him write in votes on the straw poll ballot, and in some cases paid for voters to attend. He travels to Iowa on Sunday.

Also looming over the proceedings was Sarah Palin, the former Alaska governor who kicked off the Midwestern swing of her bus tour with an appearance at the Iowa State Fair in Des Moines on Friday. Palin, who said she wasn't trying to steal the spotlight from the straw poll contendersby showing up in Iowa, has yet to decide whether she will enter the presidential race. Palin, who was not on the ballot, was not listed among straw poll finishers, which means she got less than one percent in write-in votes.

Palin in Iowa: I'm not stealing the spotlight

It's important to keep the straw poll in perspective: It reflected the beliefs of less than 17,000 of Iowa's most committed voters, a fraction of the number who will vote in the first-in-the-nation Iowa caucuses, let alone in Republican primaries and caucuses around the country. Yet the straw poll can nonetheless make or break campaigns, and Pawlenty will now have to struggle to overcome what is an undeniably disappointing finish.

In an email to supporters seeking donations immediately after the results were released, Pawlenty vowed to stay the course.

"This is a long process to restore America -- we are just beginning, and I'm eager for the campaign," he said.