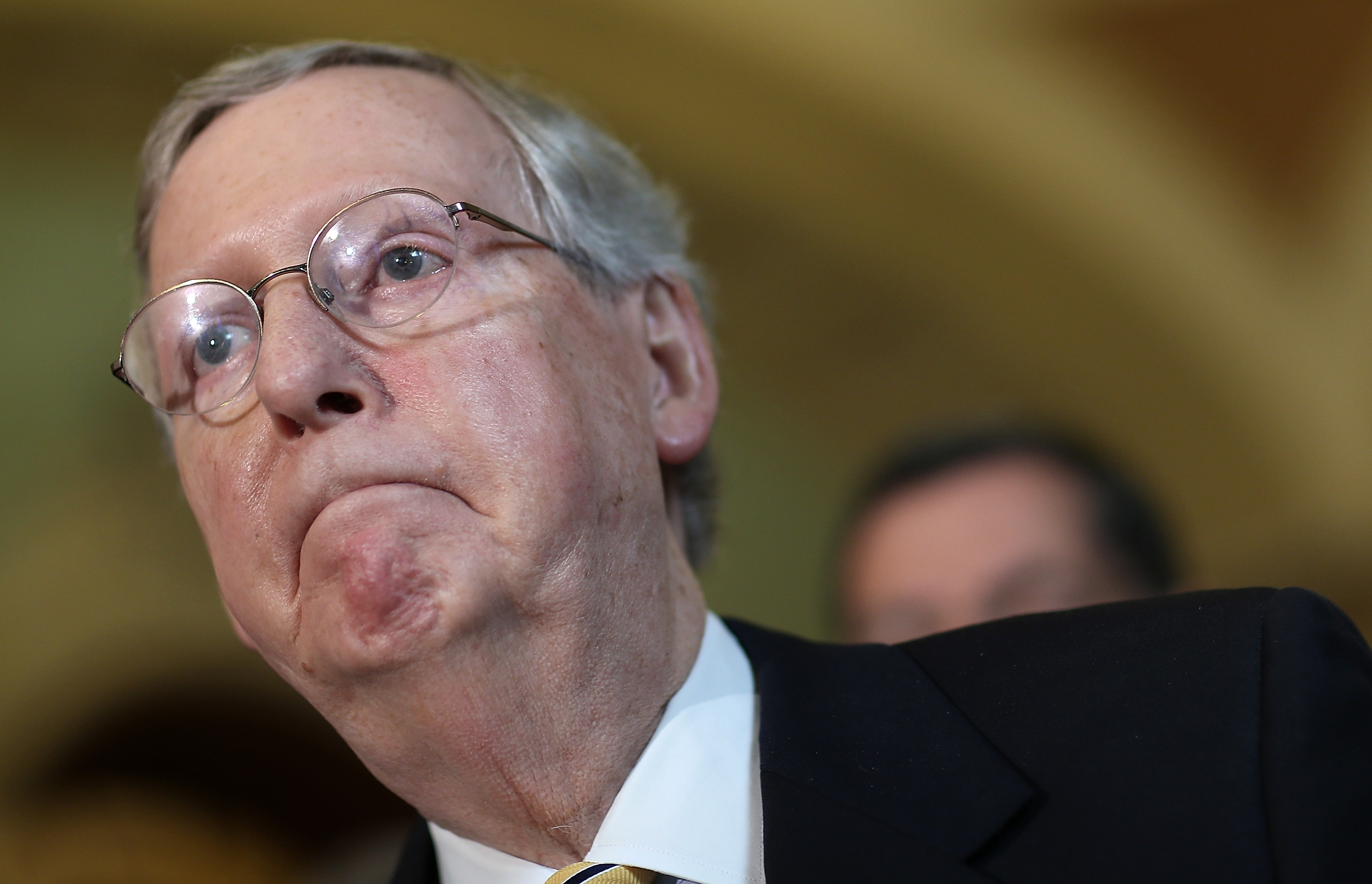 Senate Majority Leader Mitch McConnell, R-Kentucky, conceded Monday that Republicans don't have the votes to defund Planned Parenthood as part of a federal spending agreement, downplaying the likelihood of a government shutdown as Congress barrels toward a September 30 deadline to keep the government funded.

"We just don't have the votes to get the outcome that we'd like," McConnell said during an appearance on WYMT. "The way you make a law in this country, the Congress has to pass it and the president has to sign it. The president has made it very clear he's not going to sign any bill that includes defunding of Planned Parenthood, so that's another issue that awaits a new president hopefully with a different point of view about Planned Parenthood."

McConnell has faced pressure from conservatives in his caucus to take a firmer stand in opposition to any spending bills that allocate money for the women's health care provider. Some have suggested that Democrats would shoulder the blame for any shutdown that results because of their refusal to entertain spending bills that defund the organization.

During a conference call with evangelical pastors last week, Texas Sen. Cruz suggested the GOP Senate majority should insert a measure stripping funding from Planned Parenthood into a must-pass spending bill and dare Democrats to object.

"We can expect President Obama and many of the congressional Democrats to cry loudly that if Congress uses its authority, Congress will be quote 'shutting down the government.' That, of course, is nonsense," said Cruz, a conservative and presidential candidate, according to the Washington Post.

The Senate held a standalone vote last month to defund the organization, and Democrats successfully prevented the GOP from amassing the 60 votes necessary to proceed with the bill.

Cruz derided that exercise as an "empty show vote" with "no teeth and no consequence," and urged GOP leaders to try again soon by inserting a measure defunding Planned Parenthood into the more consequential spending bill.

McConnell's reticence to take Cruz's advice, however, is likely informed by the last big fiscal fight, in 2013, when Republicans insisted on defunding Obamacare as part of any spending agreement.

The GOP absorbed the lion's share of the blame for the government shutdown that resulted, handing Mr. Obama a political victory just as the fight over the health care law was intensifying.

This most recent fight involving government spending and Planned Parenthood has been sparked by a series of surreptitiously recorded videos that show the group's officials discussing, in graphic detail, the details of their work. Conservatives have been particularly incensed by the suggestion that the organization is selling fetal body parts, but Planned Parenthood has emphasized that they're merely donating the parts for research, not profiting from them.

A new video released Tuesday featured an official from an organization that partners with Planned Parenthood describing some complications with abortions, including one procedure during which a fetus "just fell out" of the womb.

It was the ninth video targeting Planned Parenthood that has been released in recent months by an organization called the Center for Medical Progress. Last week, Planned Parenthood responded to the group's videos with a report commissioned from an expert group that found the videos were deceptively edited to misrepresent the substance of the conversations they document.