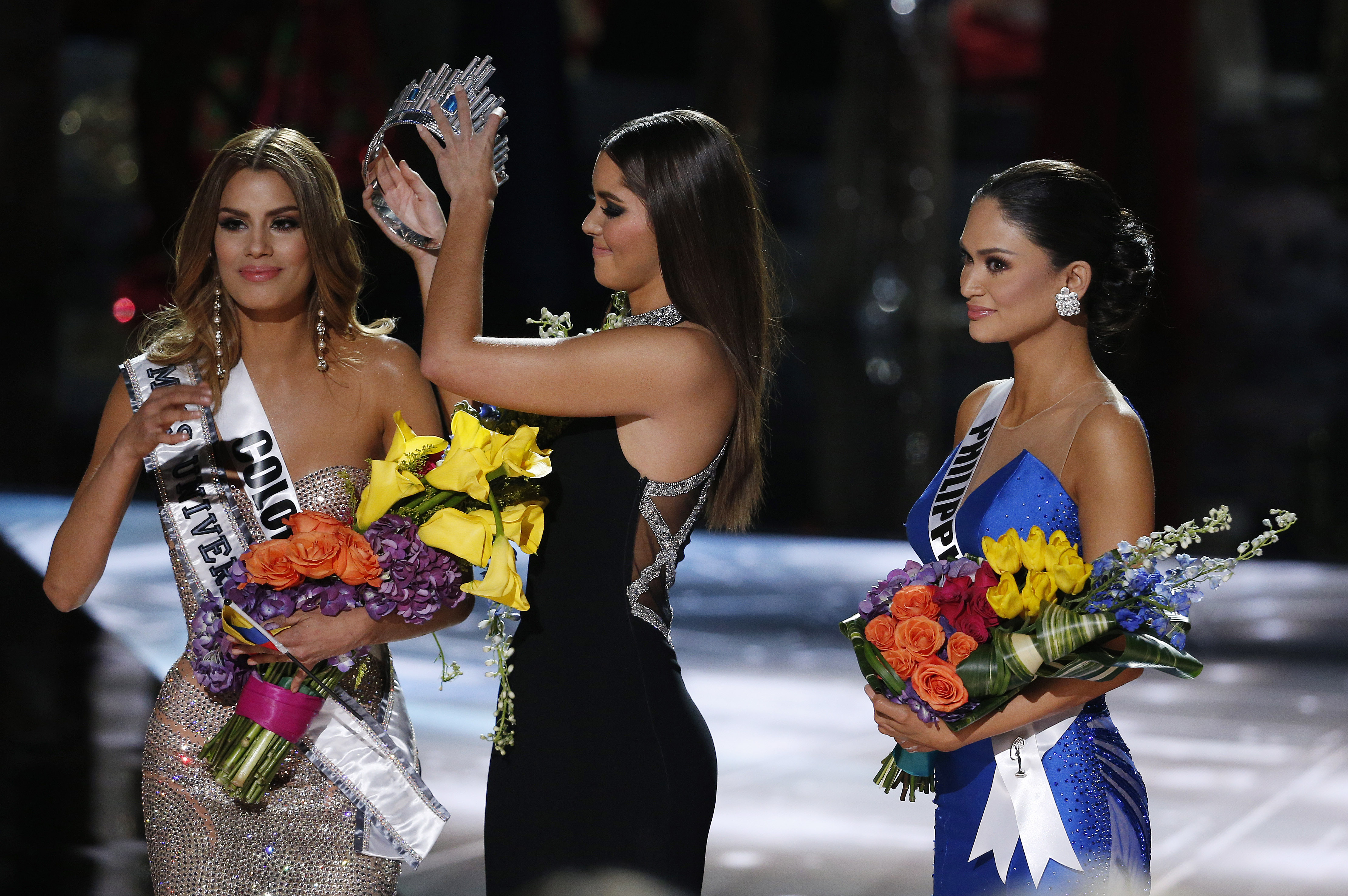 LAS VEGAS -- The Miss Universe contestant from the Philippines is this year's winner but for one brief moment, it appeared as if it might be a repeat win for Colombia.

Harvey says it was his mistake and that he would take responsibility for not reading the card correctly that named contestant Pia Alonzo Wurtzbach this year's winner and Colombia the first runner-up.

A mystified Wurtzbach appeared stunned as she walked to the front of the stage alongside the crown-wearing Arevalo before last year's Miss Universe from Colombia removed the crown and placed it on Wurtzbach's head instead.

Just minutes after the flub, Harvey took to Twitter to once again apologize.

"I want to apologize emphatically to Miss Philippians (sic) and Miss Columbia (sic). This was a terribly honest human mistake and I am so regretful," the now deleted tweet read.

"The excitement of live TV was evident tonight on the MISS UNIVERSE® stage with over 10 million live fan votes tabulated. Unfortunately, a live telecast means that human error can come into play," the statement read. "We witnessed that tonight when the wrong winner was initially announced. Our sincerest apologies to Miss Colombia Ariadna Gutierrez, Miss Philippines Pia Alonzo Wurtzbach, their families and fans. We congratulate Pia Alonzo Wurtzbach as Miss Universe 2015."

The official Miss Universe Twitter account tweeted out a video of Miss Colombia, who, through tears, thanked everyone for their support.

The competition started with women representing 80 countries between the ages of 19 and 27.

For the first time, viewers at home weighed in, with their votes being tallied in addition to four in-person celebrity judges.

NBCUniversal and Donald Trump co-owned the Miss Universe Organization until earlier this year.

The real-estate developer offended Hispanics in June when he made anti-immigrant remarks in announcing his Republican presidential run.

That led Spanish-language network Univision to pull out of the broadcast for what would have been the first of five years airing the pageants and NBC to cut business ties with Trump.

The former star of the "Celebrity Apprentice" reality show sued both companies, settling with NBC in September, which included buying the network's stake in the pageants.

The 2015 Miss Universe competition was held inside the Planet Hollywood hotel-casino on the Las Vegas Strip begins and began with an elaborate parade of costumes with each contestant representing their home countries.

Among the costumes were an "Ugly Duckling"-inspired costume from Denmark, a Rubik's Cube headdress and body suit for Hungary's contestant and one designed to look like a tuk tuk from Thailand.

Flora Coquerel of France was wearing a redesigned costume featuring glittery peace signs. The 24-year-old was among the final 15 to compete for the crown. In a video interview for the telecast, she said she was inside the soccer stadium that was attacked by Islamic State of Iraq and Syria (ISIS) terrorists on Nov. 13 describing it as "horrible, inhumane."

Also on Sunday night near where Miss Universe was being held, authorities say a car ran into pedestrians on the Las Vegas Strip.

Lt. Peter Boffelli says the vehicle was in the northbound lanes of Las Vegas Boulevard near Bellagio Way when the vehicle drove up onto the sideway in front of the Paris Hotel & Casino and struck pedestrians, including 37 people who were taken to the hospital. One person was killed.