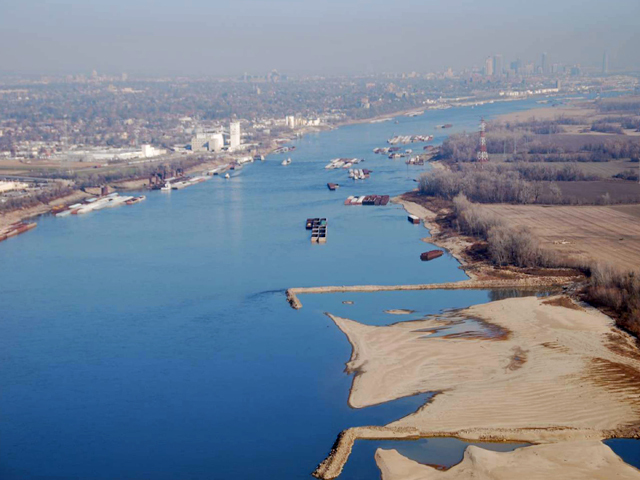 ST. LOUIS A revised Mississippi River forecast offered a bit of a reprieve for shippers Wednesday, showing the water level isn't dropping as quickly as feared. Still, at least two large barge companies already are reducing their loads over concerns about the river's depth.

Months of drought have left the Mississippi near historic low levels, a problem worsened last month when the U.S. Army Corps of Engineers reduced the outflow from an upper Missouri River dam, lessening the amount of water that drains into the Mississippi where the rivers converge near St. Louis.

The river at St. Louis on Wednesday was about 13 feet deep. The Coast Guard has said further restrictions on barge traffic — most notably in a 180-mile stretch between St. Louis and Cairo, Ill. — are likely if the river dips to around 9 feet, though the decision is based on observation of conditions and not the level on the gauge.

Earlier National Weather Service forecasts had projected getting to the 9-foot level by Sunday or Monday. But a Weather Service hydrologist told The Associated Press on Wednesday that revised modeling now calls for reaching that level around Dec. 29, then dropping another foot by Jan. 2.

A message seeking comment about the revised forecast was left for Coast Guard officials.

Hydrologist Mark Fuchs said the earlier modeling didn't account for water draining back into the Missouri River from its flood plain — draining that is occurring because the river is so low.

"It's prolonging everything," Fuchs said, though he warned the Mississippi "is going to get down there eventually if it doesn't rain."

Barge operators know that as well. Two operators say they've already decided to reduce the size of their barge loads.

Cargo Carriers has shortened its drafts — the submerged portion of barges — to 7 feet for vessels headed from the Gulf of Mexico at Louisiana to points north of St. Louis, Cargo Carriers President Rick Calhoun said. Cargo Carriers is the shipping arm of Minnesota-based Cargill Inc., operating 1,300 barges.

Drafts generally are as low as 12 feet underwater but have been restricted to 9 feet because the river is so low, restrictions that could tighten further as the river level drops.

Calhoun said every foot of reduced draft means 200 tons — or 13 percent — less cargo being shipped. At this time of year, Calhoun said, the company's northbound cargo is road salt and fertilizer.

"The industry is really in a difficult position right now," Calhoun said. "It's very much a dicey and day-to-day situation."

The severity of the issue surfaced Monday, when an 18-barge tow ran aground on a submerged sandbar at a curve south of Memphis, Tenn. Refloating that barge took some 20 hours, causing a backup of 12 northbound vessels and twice that number headed downriver, the Coast Guard said.

"The low river definitely is affecting the way mariners are transiting the river," said Lt. Ryan Gomez of the Coast Guard's Memphis office. "It is a concern right now."

River shipping trade groups have warned of a potential economic disaster if river traffic is restricted or shut down for an extended period.

Last week, several senators whose states border the Mississippi River met with Army Assistant Secretary Jo-Ellen Darcy, urging her to take two steps to ease concerns: Cut down on the amount of water held back on the upper Missouri River; and expedite removal of massive rock formations in the Mississippi River near two southern Illinois towns, formations that could scrape barges in periods of extreme drought.

Current plans call for explosives to be used in February to blow up the rocks, but Army Corps spokesman Mike Petersen in St. Louis said Wednesday that the agency has expedited soliciting bids for the work with hopes of having a contractor hired as early as next month. The Corps also has promised the senators a response to their water flow request by later this week.