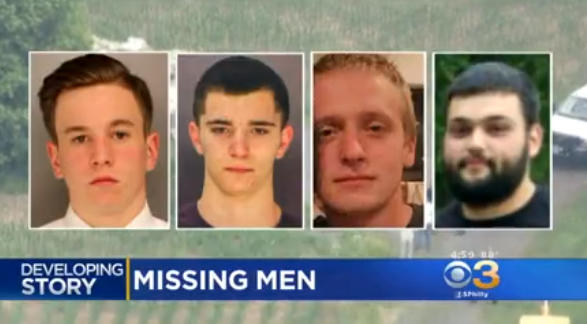 NEW HOPE, Pa. - As police resume digging and sifting through a deep common grave where multiple remains were discovered, the parents of a person of interest in the case have been subpoenaed to testify before a grand jury, CBS Philly reports.

Antonio and Sandra DiNardo, who own the property where at least one missing man's body was identified among the remains, are the parents of Cosmo DiNardo, described as a person of interest in the investigation.

Cosmo DiNardo is being held on $5 million. He was arrested Wednesday when he tried to sell a car belonging to one of the missing men. The car was found on a second DiNardo family property about half a mile from the farm. A second victim's car was also found less than three miles away.

So far, investigators have only been able to identify one set of remains -- those of 19-year-old Dean Finocchiaro, one of the four young men who vanished last week. District Attorney Matthew Weintraub said he was hopeful more will be able to be identified.

He said police are determined to "bring each and every one of these lost boys home to their families, one way or another."

The prosecutor has dribbled out details of the investigation at twice-daily briefing near where the remains were found. Little has been said about how all the young men are connected or what might have led to the disappearance of the four. At least three of the four missing men knew one another.

Weintraub said Thursday he does know more about the relationships among the men but can't share more information because he needs to "maintain the integrity of the investigation."

"This is a homicide. Make no mistake about it. We just don't know how many homicides," Weintraub said at his middle-of-the-night news conference.

DiNardo, 20, was first arrested Monday and held on $1 million bail on an unrelated gun charge before his father paid $100,000 to bail him out Tuesday. The charge stems from accusations that DiNardo was caught with a shotgun and ammunition in February despite a prior involuntary commitment to a mental health institution.

The back-to-back arrests bought investigators time as they scoured the farm and other spots across the county for clues to the men's disappearance, Weintraub said.

DiNardo's parents, Antonio and Sandra DiNardo, own the farm in upper Bucks County, a bucolic area with rolling hillsides, new housing developments and historic sites. They also own a concrete company near their home in Bensalem, closer to Philadelphia.

An attorney representing the couple issued a statement saying they sympathize with the families of the missing men and are cooperating "in every way possible with the investigation."

The FBI had been using heavy equipment to dig a deep trench on the farm property and then sifting through each bucket of dirt by hand.

Cadaver dogs led authorities to the spot on the 90-acre farm in Solebury Township where they discovered the remains inside a 12½-foot-deep common grave.

"I don't understand the science behind it, but those dogs could smell these poor boys 12½ feet below the ground," Weintraub said.

Fire and rescue crews on Thursday were using plywood to help shore up the deep grave as investigators worked inside under intense heat and choking dust.

"They're tenderly, painstakingly, reverentially recovering the remains of people they do not even know," Weintraub said.

The other missing men are 22-year-old Mark Sturgis, 21-year-old Tom Meo and 19-year-old Jimi Tar Patrick. Patrick, who was a year behind DiNardo at a Roman Catholic high school for boys, was last seen on July 5; the other three disappeared on Friday.

It's unclear how well the four knew DiNardo, if at all.