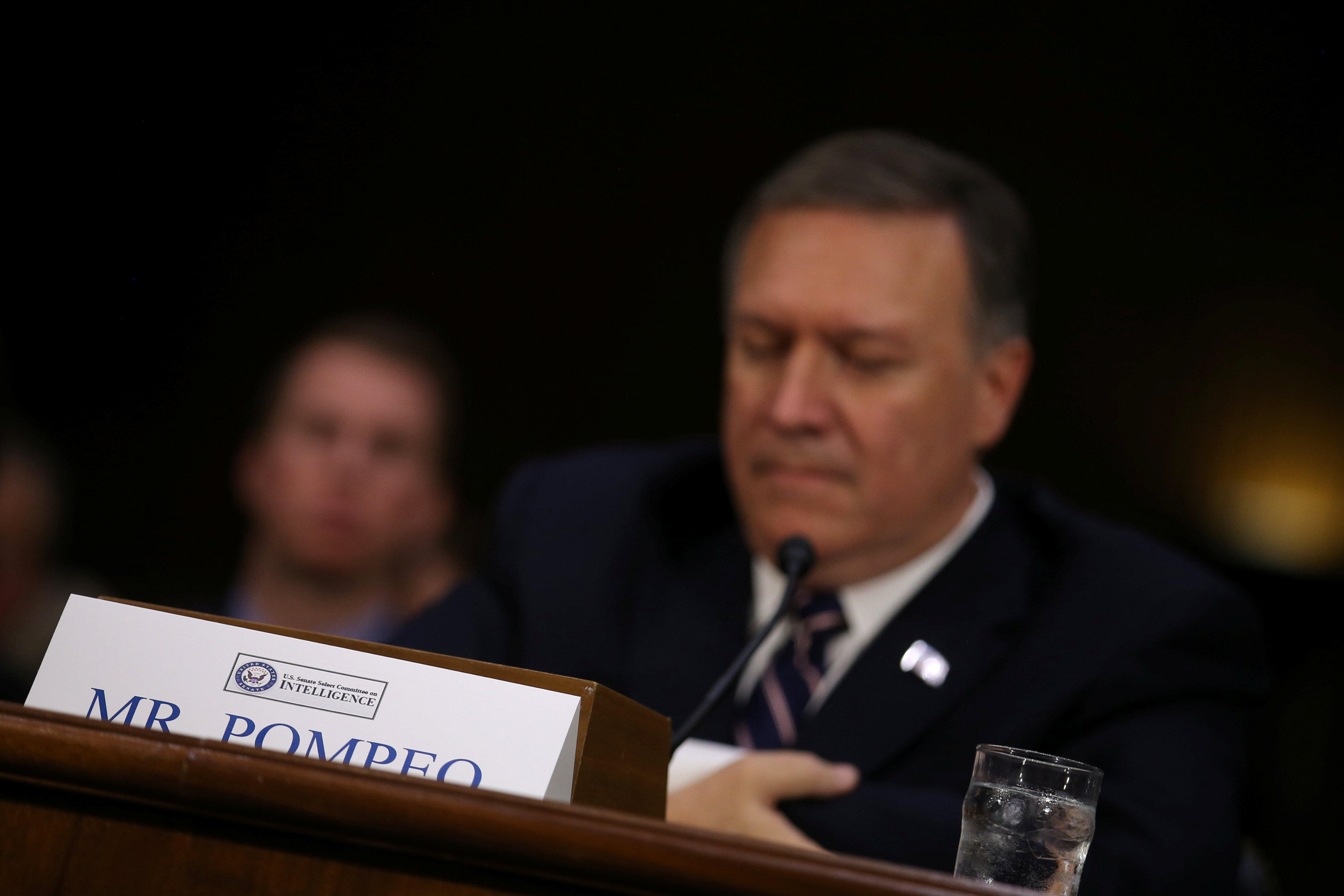 WASHINGTON -- Donald Trump’s pick to run the CIA on Thursday sided with intelligence officials who have determined the Kremlin was behind election cyberattacks, and he took a tough stand against Russia, distancing himself from the president-elect, who wants to warm relations with Moscow.

Rep. Mike Pompeo, a four-term conservative Kansas Republican, spoke at his confirmation hearing before the Senate intelligence committee amid a testy standoff between Trump and the spy community over Russian activities during the presidential election.

Since winning the election, Mr. Trump has repeatedly challenged the intelligence community’s assessment that Russia was behind the hacking of the Democratic National Committee and other political sites.

“It’s pretty clear about what took place here about Russia involvement in efforts to hack information and to have an impact on American democracy,” Pompeo said. “I’m very clear-eyed about what that intelligence report says.”

“This was an aggressive action taken by the senior leaders inside Russia,” Pompeo said.

On Wednesday, Trump acknowledged Russia was responsible for the hacking but speculated that intelligence agencies might have leaked to news organizations details about a classified briefing with him that included unsubstantiated allegations that Russia had collected compromising sexual and financial information about him.

“I share your view that these are unsubstantiated media reports,” Pompeo said, adding that he thought the leaks themselves were “intensely serious.”

Pompeo pledged to investigate the allegations and “pursue the facts where ever they take us.”

In his opening remarks, Pompeo talked about Russia’s activities in other places around the world and suggested that the United States needs to remain wary of Moscow’s intentions.

“Russia has reasserted itself aggressively, invading and occupying Ukraine, threatening Europe and doing nothing to aid in the defeat of ISIS,” Pompeo said, referring to Islamic State militants.

And asked whether he considers Wikileaks, which posted thousands of the hacked emails from the DNC and Clinton campaign chairman John Podesta, to be a credible source of information, Pompeo said he did not.

“I have never believed that Wikileaks is credible,” he said. “... I have some deep understanding of Wikileaks and I have never viewed it as a credible source of information for the United States or anyone else.”

Pompeo also broke with Mr. Trump on the issue of torture: Mr. Trump indicated at several points during the campaign that he would be interested in bringing back waterboarding and other enhanced interrogation techniques.

Asked whether he would comply if Mr. Trump asked him to reintroduce those techniques, Pompeo replied: “Absolutely not.”

“I can’t imagine that I would be asked that by the President-elect or, then, the President,” he said, adding that there is “no doubt in my mind about the limitations” the law places on torture. “I’ll always comply with the law,” he said.

Adding a little drama to the hearing, the lights went out in a Senate hearing room when the top Democrat on the committee mentioned Russia. The committee went into recess. When the lights didn’t go back on, the hearing was moved to a different building.

The remarks by Sen. Mark Warner, D-Va., were on the committee’s promise to review the intelligence behind an assessment that Russia, and specifically Putin, interfered in the presidential election in an effort to get Mr. Trump elected.

On other issues, Pompeo said North Korea has dangerously accelerated its nuclear and ballistic missile capabilities. He called the conflict in Syria a tragic humanitarian catastrophe that has led to the rise of extremism and sectarianism and has destabilized the Middle East and Europe. And he said Iran has become an “even more emboldened and disruptive player in the Middle East.”

Pompeo has been critical of the Obama administration’s nuclear deal with Iran, which granted Tehran sanctions relief for rolling back its nuclear weapons program.

“While I opposed the Iran deal as a member of Congress, if confirmed, my role will change,” Pompeo said. “I will lead the agency to aggressively pursue collection operations and ensure analysts have the time, political space and resources to make objective and sound judgments.”

Pompeo was a vocal member of the partisan House committee set up to investigate the deadly attack on a U.S. diplomatic post in Benghazi, Libya, in 2012, which occurred while Hillary Clinton was secretary of state. He told the committee that he understands that as CIA director he would have to make the transition from a partisan, policymaking lawmaker to an objective intelligence collector.

Pompeo graduated first in the Class of 1986 at the U.S. Military Academy at West Point. He served in the Army at a time when the Soviet Union was America’s main adversary. As a member of the House intelligence committee, Pompeo traveled widely and met many intelligence professionals.

“I have spent the majority of my life outside politics - as a U.S. Army cavalry officer, litigator and head of two manufacturing businesses,” Pompeo said. “Returning to duty that requires hard work and unerring candor is something that is in my bones.”