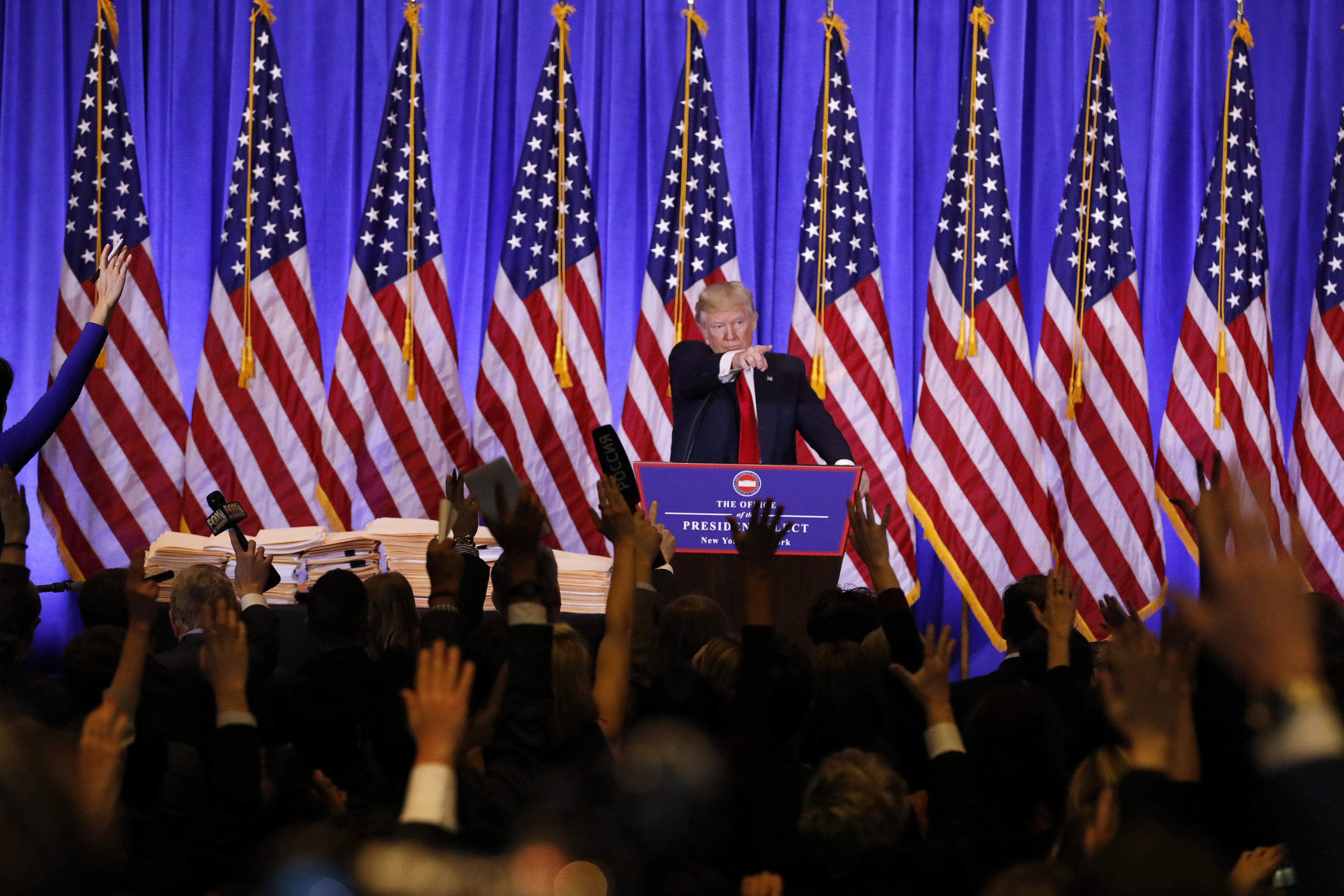 Though the motivation for the news conference was to outline how he will deal with his complex web of business interests once he’s in the White House, much of the press conference ended up focusing on Russian election interference and on reports Tuesday that the intelligence community’s classified report on Russian hacking had an addendum with unverified details of potentially compromising information that Russia has gathered on the president-elect, and that Mr. Trump was briefed on last week.

Russian hacking, and reports of Russia holding “compromising information” on him

Mr. Trump said he’s not allowed to discuss information that was presented during his intelligence briefing -- but confirmed that outside the briefing, he did in fact see the memo in question on compromising information, calling it a “disgrace.”

“I saw the information, I read the information outside of that meeting. It’s all fake news -- it’s phony stuff, it didn’t happen and it was gotten by opponents of ours,” he said. “It was a group of opponents who got together -- sick people -- and they put that crap together.”

Asked whether he accepts the intelligence agencies’ conclusion that Russia actively worked to influence the 2016 election, Mr. Trump said he believes Russia was responsible for the hacking -- but stopped short of saying he believed they had an influence on the campaign.

“As far as hacking, I think it was Russian,” he said. “But I think we also get hacked by other countries and other people and I can say that when we lost 22 million names and everything else that was hacked recently, they didn’t make a big deal out of that, that was something that was extraordinary.”

Asked if he had a message for Putin about future hacking activities, Mr. Trump replied: “He shouldn’t be doing it, he won’t be doing it.”

“Russia will have much greater respect for our country when I’m leading it than when other people have led it,” he said. “You will see that.”

He said he considers Putin’s praise of him to be “an asset, not a liability,” though he doesn’t yet know whether he and Putin will “get along.”

“Now I don’t know that I’m going to get along with Vladimir Putin,” he said. “I hope I do, but … do you honestly believe that Hillary [Clinton] will be tougher on Putin than me?”

Though Mr. Trump asserted that he would have been able to continue running his business from the White House if he wanted to, he said his two sons, Eric and Donald Jr., along with Trump Organization CFO Allen Weisselberg, would take over his businesses while he’s president.

“I could actually run my business ... and run government at the same time,” he said. “I don’t like the way that looks but I’d be able to if I wanted to.”

The stacks of manila folders on the table next to Mr. Trump at the podium were, he said, “some of the many documents I’ve signed turning over complete and total control.”

Mr. Trump introduced Sherri Dillon of Morgan Lewis, a lawyer who has been working on the plan for the Trump business empire.

Dillon said Mr. Trump’s business holdings and investments will be put in a trust before Inauguration Day to be overseen by sons Donald Jr. and Eric, and Trump Organization CFO Allen Weisselberg. Mr. Trump also said that his two adult sons will run the company. Ivanka Trump, whose husband Jared Kushner is set to become a senior adviser to the Trump White House, will have “no further management” role in the company.

There will be “no new foreign deals” made during the duration of Mr. Trump’s presidency, Dillon added, and domestic deals will be subject to “severe restrictions.”

To people who suggest Mr. Trump should sell his business, Dillon said that would only “exacerbate” the possibility for conflicts.

Additionally, in order to ensure that “it is the American people who will profit” going forward, Mr. Trump has directed that all profits from foreign government payments made to his hotels will be donated to the U.S. Treasury.”

At the start of the press conference, Mr. Trump thanked news organizations that did not run stories on Russia’s alleged compromising information about him.

“I want to thank a lot of the news organizations, some of whom have not treated me well over the years, a couple in particular, and they came out so strongly against that fake news,” he said. “I have great respect for the news, I have great respect for freedom of the press and all of that, but I will tell you there were some news organizations … that were so professional, so incredibly professional.”

Later on, he called BuzzFeed, which posted a document which it says is the dossier about the Russian information, “a failing pile of garbage,” and also criticized CNN for publicizing the reports on Tuesday.

On a question about his proposed wall along the U.S.-Mexico border, Mr. Trump said Mexico will “reimburse” the U.S. for the wall because he doesn’t want to wait to build it until a deal can be made with Mexico.

“I want to get the wall started,” he said. “I don’t want to wait a year and a half until I make my deal with Mexico.”

As for the form that reimbursement will take, Mr. Trump said it’s more likely it will be through a “tax” than a “payment.”

In response to a question from CBS News’ Major Garrett, Mr. Trump said he plans to announce his pick to replace the late Supreme Court Justice Antonin Scalia “within two weeks” of taking office.

“That will be probably within two weeks of the 20th,” he said. “So within about two weeks, probably the second week.”

Asked to discuss his administration’s plan for dealing with the Affordable Care Act, Mr. Trump declined to give any specifics but said, “We’re going to get health care taken care of in this country.”

He did say, however, that the ACA would be replaced “essentially simultaneously” with something “far less expensive and far better.” As soon as his health and human services secretary nominee, Rep. Tom Price, is confirmed, Mr. Trump told reporters “we’ll be submitting a plan” to repeal and replace Obamacare.