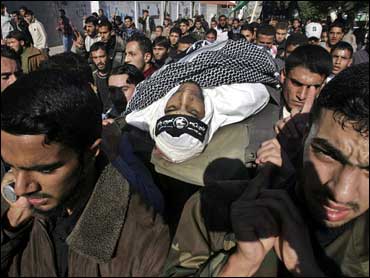 Israeli and Palestinian negotiators on Wednesday began the first peace talks in nearly seven years, trying to reconcile conflicting claims and clashing dreams in a bid to end six decades of conflict.

The barrage came hours after Israeli forces ended a broad incursion into the coastal strip that killed six militants and left a wide swath of damage in its wake.

Israel's incursion into Gaza, along with a plan to expand a neighborhood in disputed east Jerusalem, have prompted Palestinian charges that Israel is sabotaging the atmosphere even before the talks begin. Israel rejects the charges.

Late Tuesday, Israel announced that the talks would be moved from Jerusalem's ornate King David Hotel to an undisclosed location.

Israeli Foreign Ministry spokesman Arye Mekel said the talks got under way around midday. He said both sides wanted to keep the meeting "low key," but there were hopes to "jump start" the peace process. The talks were believed to be taking place at another Jerusalem hotel.

Israel is pursuing peace with the moderate Palestinian president, Mahmoud Abbas, who rules from the West Bank. At the same time, it continues to battle the Hamas militant group, which has ruled Gaza since defeating Abbas' forces last June.

Israel regularly carries out brief ground incursions and air strikes in Gaza in a bid to stop Palestinian rocket and mortar attacks on southern Israeli towns.

The Islamic Jihad militant group said it fired nine of the rockets to avenge Israel's incursion. "The resistance is going to escalate the operations targeting the Zionist colonies in the coming hours," said Abu Ahmad, a spokesman for the group.

Tuesday's operation, in which tanks and bulldozers pushed 2.5 miles into southern Gaza, was the broadest push since the Hamas takeover. Early Wednesday, the troops had withdrawn to a buffer zone along the Israeli border.

The Israeli forces left behind heavy damage to al Fukhari, a farming community near the southern town of Khan Younis.

About 75 acres of olive trees and orange groves were uprooted, greenhouses and the outer walls of homes were damaged, and homes were left without power, said Ouda Alomar, mayor of the community. Repair crews were trying to restore electricity and reopen roads that were closed with dirt mounds put up by the troops, he said.