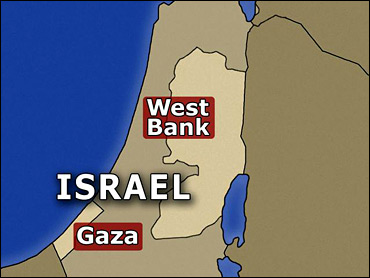 Israeli tanks and bulldozers backed by attack aircraft moved into the southern Gaza Strip on Tuesday in the biggest operation in the territory since Islamic Hamas forces wrested control in June, setting off clashes with militants.

Schoolchildren ran through the streets of Khan Younis, let out early from school so they could take refuge in their homes.

Militants carrying land mines and other weapons dodged among houses and maneuvered behind the tanks to fire at troops. Others took cover behind trees, or covered themselves in leaves to camouflage themselves in open farmlands in the area of the fighting.

Tanks and bulldozers were about a mile deep inside southern Gaza, on the main road between the towns of Khan Younis and Rafah, and deployed over a 2.5-mile stretch of territory.

The military described it as a routine operation "against the terror infrastructure." Militants in Gaza routinely fire crude rockets and mortars at Israeli border communities, and smuggle in weapons from Egypt.

Residents and Hamas security forces said at least 30 tanks and bulldozers took part in the operation, but the military said only 10 tanks were sent in.

The area where the operation was taking place is a main launching ground for rocket and mortar assaults on army bases and the Israeli-controlled Sufa crossing into Gaza. More than 15 militants were killed in the area in recent Israeli air strikes against rocket squads and Hamas fighters.

Soldiers took over the rooftops of several homes at the onset of the operation, which began around dawn, and detained more than 60 people in house-to-house raids, residents said. The Israeli military said they were taken into custody for questioning.

An Israeli tank was smoldering after it was hit by a Palestinian grenade. Two soldiers inside were slightly wounded, the military said.

Hamas spokesman Fawzi Barhoum accused Israel of carrying out its decision to "launch a major operation against the Palestinian resistance in Gaza, especially Hamas, and tighten the siege on the Gaza Strip.

"They believe that such operations will harm the resistance and weaken it, but they are mistaken," Barhoum added.

Although Israel has warned that a major operation against Gaza militants was in the offing, it has said now is not the time, and the military insisted Tuesday that there was nothing out of the ordinary about the day's incursion.

CBS News correspondent Robert Berger reports Israel also carried out air strikes against armed Palestinians in northern Gaza, in the area of Beit Hanoun, according to the military. Officials said the army had identified two hits in the two separate assaults.

Hamas said it attacked two groups of soldiers in northern Gaza, but reported no casualties.

The Islamic Jihad militant group said one member was killed and three others were wounded in an Israeli ground attack on a rocket-launching squad.

The violence came a day after Israeli Prime Minister Ehud Olmert pledged to "forge a historic path" toward a final accord with the moderate Palestinian government in the West Bank, led by Palestinian President Mahmoud Abbas.

On Wednesday, the two sides are to launch their first formal peace talks in seven years. But Olmert has warned that Israel would not implement any peace deal until Abbas regains control of Gaza and reins in militants there and in the West Bank.