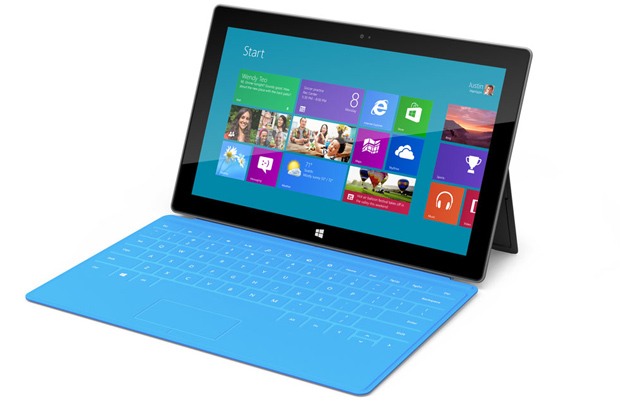 (MoneyWatch) COMMENTARY Microsoft (MSFT) has announced its own tablet dubbed Microsoft Surface in an attempt to end its nosedive in the mobile market and overtake competitor and partner Apple (AAPL), to say nothing of absolute rival Google (GOOG).

The pressure is on Microsoft to deliver, for the first time, a computer under its own brand, rather than software running on another company's hardware. To that end, the software giant is promising a device that could potentially win favor among some users, although full specs aren't yet available, let alone hands-on reviews. A 10.6-inch-wide display will support widescreen HD video, although probably not at the ultra-high resolution of the iPad's Retina display.

There are two types of covers: A Touch cover, which will detect gestures as typing, and a Type cover that doubles as a full keyboard, for people who need or want more than an on-screen keyboard. Covers include a built-in kickstand to prop the tablet up. Stereo speakers and dual microphones with a rear-facing camera will support video calls using Skype, which Microsoft bought last year.

The device will come in a choice of five colors and be just over a third of an inch thick. Users will have a choice of 32GB or 64GB of storage. Units will offer a full-sized USB 2.0 port, that will likely be compatible with a larger number of devices than the iPad, a microSD port to use external memory chips, and a micro HD video connector to attach an external monitor.

A Pro version will differ in a number of ways, including using an Intel processor instead of an ARM chip, presumably for greater computing power, the choice of 64GB or 128GB of storage, a USB 3.0 port (much faster than the USB 2.0), and a mini DisplayPort connector instead of the micro HD.

Microsoft hasn't announced an availability date nor a price, although a company press release suggested that the cost would be "competitive with a comparable ARM tablet or Intel Ultrabook-class PC." Currently, Ultrabooks can run $1,000 or more, but as an IDC analyst has recently told MoneyWatch, Ultrabook prices are expected to come close to the $600 level by the end of the year.

Current tablet pricing would suggest something in the same ballpark, though Microsoft has said that it would include a version of Office, its widely popular package of word processor, spreadsheet, and other applications. That could mean either a higher price because of the software, or a highly competitive feature calculated to draw people to the device. Because it runs Windows, Surface is likely to be compatible with many popular third-party software packages, giving it an advantage in the inevitable comparison between it, Android tablets, and the iPad over the variety of apps available.

Microsoft could have potential problems with its current hardware partners: It is the first time the company has offered its own computer and puts Microsoft into competition with the likes of HP (HPQ) and Dell (DELL).