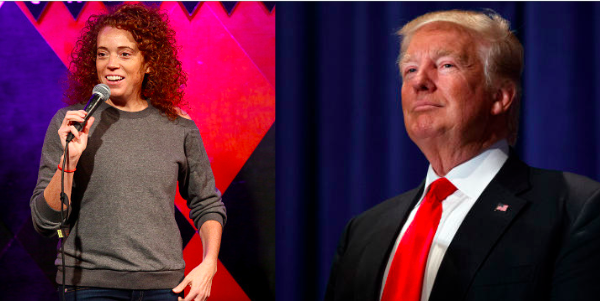 President Trump attacked Michelle Wolf via Twitter Tuesday night, saying the reason the White House Correspondents' Association (WHCA) dinner won't feature a comedian next year is because she "bombed" her performance in April. The comedian wasn't having any of it.

"So-called comedian Michelle Wolf bombed so badly last year at the White House Correspondents' Dinner that this year, for the first time in decades, they will have an author instead of a comedian," wrote Mr. Trump tweeted Tuesday night. "Good first step in comeback of a dying evening and tradition! Maybe I will go?"

Wolf responded to the insult less than two hours later with a short barb that attacked both Mr. Trump and the first lady Melania Trump.

"I bet you'd be on my side if I had killed a journalist. #BeBest," wrote the comedian.

Wolf appears to be referring to Mr. Trump's vow to stand with Saudi Arabia, regardless of the CIA's conclusion about the Saudi Crown Prince Mohammad bin Salman's involvement in the slaying of journalist Jamal Khashoggi. The decision has been denounced by many lawmakers, including Republican Sens. Rand Paul and Bob Corker and Democrat Sen. Mark Warner.

Wolf's performance at the 2018 WHCA dinner earlier this year was met with scathing criticism from Mr. Trump, members of his administration and journalists alike.

The comedian's jokes about White House press secretary Sarah Huckabee Sanders, who was sitting a few feet away, garnered the most outrage.

"I actually really like Sarah. I think she's very resourceful. Like she burns facts, and then she uses that ash to create a perfect smoky eye. Like maybe she's born with it, maybe it's lies. It's probably lies," Wolf said earlier this year.

WHCA's then-president Margaret Talev even tweeted a statement from the group's official account saying, "The entertainer's monologue was not in the spirit of that mission."

Typically, the dinner features a comedian. Wolf reacted Monday to the news.

"The @whca are cowards," she tweeted, adding, "The media is complicit. And I couldn't be prouder."