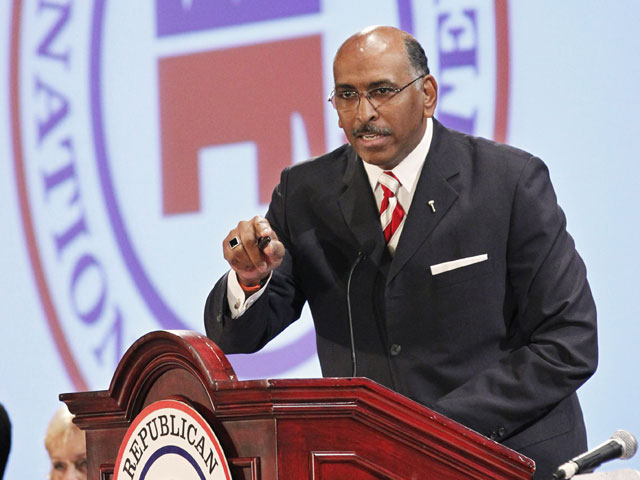 After seven rounds of votes, Reince Priebus has been elected chairman of the Republican National Committee. Read a full report here.

NATIONAL HARBOR, Md. - After four rounds of voting for the 2011 chair of the Republican National Committee, Michael Steele, the current chairman, this afternoon dropped out of the race for re-election to the post -- paving the way for someone new to take the helm.

Reince Priebus, the Wisconsin Republican Party chairman, leads with 80 votes after the sixth round of voting -- only five votes short of victory. Michigan Committeeman Saul Anuzis follows with 37 votes, while former RNC official Maria Cino, the candidate to whom Steele threw his support upon withdrawing from the race, earned 34.

Former Missouri GOP Chair Ann Wagner, who in the 6th round trailed with 17 votes, announced her withdrawal from the race after that round.

The committee's 168 rank-and-file members gathered in Maryland today for the close of its winter meeting, at which they are scheduled to elect a new chairman. It was after a series of four successive votes, during which Steele progressively lost support, that he announced his withdrawal from the race.

"At this time, I will step aside for others to lead. But in so doing, I hope you all appreciate the legacy we leave," Steele said, adding that "despite the difficulties..we won."

Reince Priebus, the Wisconsin Republican Party chairman, has consistently gotten the most votes in each round of voting.

Wisconsin RNC committeeman Steve King nominated Priebus for the job and praised him for helping the GOP achieve strong gains in Wisconsin last year - taking the governorship, the lt. governorship, the attorney general's seat, both houses of the state legislature, a U.S. Senate seat, and two congressional seats.

"A state that was totally black and blue became red," King said. "Reince is the leader we need to unify our committee, bring the resources we so badly need."

The committee will continue to hold rounds of voting until one candidate gets at least 85 votes, or more than half of the committee's support. Priebus is already more than half way to the number he needs to become the next chairman.

"We need a chairman who can raise the money and manage the money that she raises," Tennessee GOP Chairman Chris Devaney said, nominating Ann Wagner. Even before the voting started, some members grabbed the microphone during the committee's morning business to grumble about Steele's shortingcomings - namely, the fact that he's steered the committee into more than $20 million worth of debt.

Two state GOP chairmen stood up to announce they would not vote to ratify the budget put forward by Steele and his staff. North Carolina's GOP Chairman Tom Fetzer expressly said the committee should wait for the incoming chairman to draw up a new budget.

"We cannot be the party of fiscal responsibility... we can't lead if we are operating in deficit," Fetzer said.

In opening remarks today, Steele made a last-ditch appeal to the committee members, reminding them of all the RNC accomplished during his controversial two-year term. The committee went into debt because it was helping the GOP win elections, he argued.

The GOP saw 44 million voters turn out for the party in the 2010 midterms - the highest midterm turnout for any party in U.S. history, Steele touted. The RNC improved its online infrastructure and opened more offices.

"The efforts of our party, a party once tagged as an endangered species, speaks for itself," he said. "I hope all of you regardless of the outcome of this day appreciate what you've done to establish firmly the Republican reneissance."

He acknowledged, however, that heading into the 2012 elections, the committee's job only gets harder.

Most of the RNC members walked into today's meeting without any public commitment to support any particular candidate.

"I'm going to make up my mind in about the next 15 minutes," Ralph Seekins, a Republican committeeman from Alaska, said before walking into the convention hall ahead of the first round of voting. "I want someone who really can lead in the area that we are most interested in right now, and that is fundraising, getting us prepared for the next election."