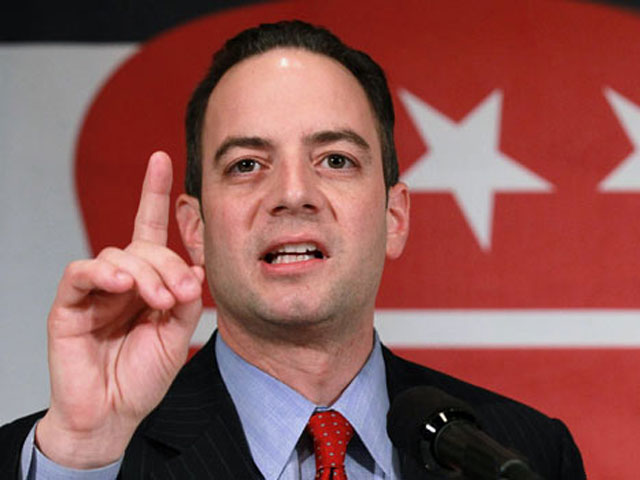 "We all recognize there's a steep hill ahead of us," Priebus said. "The only way we'll be able to move froward is if we move together."

Steele's two-year tenure as chair was a mixed bag, and it created some public spats and divisions with in the committee.

Under Steele's leadership, the the GOP won 63 House seats and turned 21 state legislatures from blue to red. The GOP saw 44 million voters turn out for the party in the 2010 midterms - the highest midterm turnout for any party in U.S. history.

At the same time, the RNC is currently more than $21 million in debt - at a moment when it must start building up its infrastructure to support the 2012 Republican presidential campaign. Furthermore, the RNC will want to let its presidential candidate take the spotlight in this coming election cycle. Steele, to his party's chagrin, has earned a reputation for stealing headlines with his verbal gaffes and mismanagement of the committee.

"I will step aside because I think the party is ready for something different," Steele said today when he dropped out of the running.

The embattled chairman didn't give up his seat without a fight, however. He entered the race in spite of a great deal of public rancor over his leadership and stayed in the race through four rounds of the committee's run-off voting, even though Priebus received more votes than him in even the first round.

Steele eventually delivered a graceful exit speech and appealed to his colleagues to put their differences aside for the sake of the party.

"We have been some big storms, some small storms, but this storm you cannot allow to continue," he said. "We must heal oursleves."

The next two years will be pivotal for the RNC as it seeks to draw back fundraisers who opted in the 2010 election cycle to financially support outside conservative groups like the Karl Rove-affiliated American Crossroads. Additionally, the RNC will have to work to ensure that independent conservative movements like the Tea Party serve as allies rather than obstacles during the GOP primary and the 2012 general election.

"Our party is part of the conservative grassroots movement, not in competition with it," Priebus said.

In the coming election cycle, the Republican party will also have to contend with a more mobilized Democratic voting base, expected to turn out in stronger numbers than in 2010 with President Obama back on the ballot.

Priebus, a close ally of Steele's before opting to run against him for the chairmanship, is no stranger to competitive races. He won high praise from his fellow committee members today for his record of success in Wisconsin. The Wisconsin GOP last year won the governor's and the lieutenant governor's offices, the attorney general's seat, both houses of the state legislature, a U.S. Senate seat, and two congressional seats.

The 38-year-old Priebus is an attorney with Michael Best & Friedrich and previously worked in the Wisconsin legislature.

Conservatives outside of the RNC sounded optimistic about Priebus' election.

"I'd like to say something important: it is now safe to give money to the RNC," RedState's Erick Erickson said via Twitter, "Like Episodes 1-3 of Star Wars, we can ignore the last two yrs."

"In light of the critical elections scheduled over the next two years, we absolutely must have a strong Republican National Committee supporting our candidates up and down the ballot," he said. "Reince Priebus' leadership will continue our Party's forward momentum and pave the way for genuine reforms that restore government of the people, by the people, for the people."

Former House Speaker Newt Gingrich said in a statement, "Reince Priebus' election as RNC Chairman is a major step toward making Obama a one term President."

The whole election for the chairmanship took seven rounds of voting, and on the last round, Priebus won 97 of 168 votes. Michigan Committeeman Saul Anuzis won 43 votes in the last round, and former RNC official Maria Cino trailed with 28.

Former Missouri GOP Chair Ann Wagner withdrew from the race after the sixth round, in which she received only 17 votes.