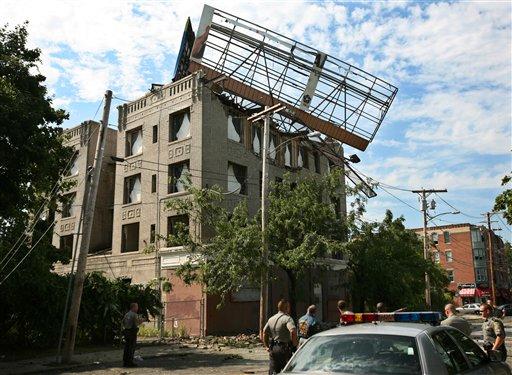 An ebullient Michael Jackson greeted about 200 children who were brought Friday to the fairy-tale theme park at his countryside ranch — and looked at one point like he might even stay to play.

"I hope you have a wonderful day. Merry Christmas. I love you," the pop singer called out from the driveway of his estate.

When one of the youngsters shouted, "We love you!" Jackson replied "I love you more" before putting an umbrella over his head and walking back toward his house.

In his brief appearance, Jackson smiled, waved and at one point looked as if he would come back and play with the children, but instead got into a vehicle that took him off the property.

Spokeswoman Raymone K. Bain said Jackson chose to make the unusual personal appearance as a surprise for the last group of children touring Neverland before the Christmas holiday.

Santa Barbara County authorities have charged Jackson, 46, with molesting a boy, conspiracy and administering an intoxicating agent, alcohol, to his alleged victim. His trial is set for next year.

Investigators have carried out raids at the ranch, and in a recent court filing that seeks to introduce evidence of other purported crimes that went uncharged, prosecutors described the estate as "a veritable paradise" for children.

Bain said charitable and civic groups bring children to Neverland at least three times a month; the estate contains streams, waterfalls and a lake, and the grounds are decorated with bronze statues of children at play.

On Friday, two elephants, a camel, a baby llama and flamingos were on hand. The estate provided lunch, candy canes, popcorn and a Santa Claus. The children could also play in a video arcade with unlimited games.

"Generally Mr. Jackson is not here all the time," Bain said. "There are events here daily. He wanted to surprise the kids. He has given his whole life to children and charities."