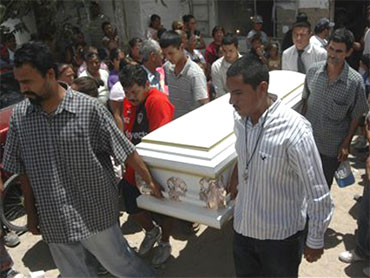 Mexico condemned the shooting of a 15-year-old boy by a U.S. Border Patrol agent Thursday through diplomatic correspondence and an angry phone call to the Homeland Security secretary. Some Mexican politicians called for the agent's extradition to face Mexican justice.

Anger over Monday's shooting across a muddy riverbed on the international border was fueled by a cell-phone video that showed key moments in the shooting, as debate began over which country has jurisdiction in the case.

A still-unidentified Border Patrol agent trying to arrest illegal immigrants running into the United States fired his weapon from the U.S. side into Mexico, killing 15-year-old Sergio Adrian Hernandez Huereka while people on the Mexican side threw rocks at the Border Patrol agents on the scene.

What is still unclear is whether Hernandez was one of the rock-throwers and whether the agent or the victim crossed the international border. Shortly after the shooting, Mexican federal police chased Border Patrol agents out of the riverbed with rifles trained on them while a crowd on the Mexican side taunted the U.S. officials and threw rocks and firecrackers.

"We are worried by this surge of violence against Mexicans, which comes along with a surge of other anti-immigrant and anti-Mexican occurrences in the United States," Mexican President Felipe Calderon said in a new statement, apparently referring to Arizona's new immigration law, which the Mexican leader has previously condemned as discriminatory.

The grainy cell phone video aired by Univision in Mexico shows an edited glimpse of the violence. In it, a Border Patrol agent on a bicycle arrives in the riverbed as several men attempt to run back to Mexico. He detains one on the U.S. side and once he has him on the ground, fires two audible shots toward Mexico. The camera then shows what appears to be a body under a nearby railroad bridge.

Interior Secretary Fernando Gomez Mont phoned U.S. Homeland Security Secretary Janet Napolitano, to protest the killing of Hernandez and a man on the California-Mexico border two weeks ago. Gomez Mont's office said he demanded that the U.S. and Mexico carry out a joint review of protocols on the use of force by border officers.

Gomez Mont told Napolitano the "unjustified use of force against our population is unacceptable to the Mexican government."

Border Patrol agents are allowed to use lethal force against rock-throwers.

Calderon's government has comes under increasing criticism at home for what some Mexicans believe is a lukewarm reaction to the two deaths. Opposition politicians and some commentators criticized Calderon for leaving on Thursday to watch the World Cup in South Africa.

Jesus Ortega, president of the opposition Democratic Revolution Party, said the Border Patrol agent who shot Hernandez should be extradited to Mexico.

"When a delinquent commits a crime in Mexico that affects a U.S. citizen, extradition is immediately requested and the Mexican government immediately grants it," Ortega said.

Calderon gave no indication his government had any intention of seeking extradition. Instead, he called for a thorough U.S. investigation that "clears up the facts and culminates with punishing those responsible."

So when a bullet leaves one country and kills someone in another, who has jurisdiction?

If it is determined that the shooting was a crime and not justified use of force by law enforcement, long-standing legal principle in the U.S. states that the victim's location determines jurisdiction, international law experts said.

For example, if someone fired a bullet from North Carolina and killed someone in South Carolina, the latter would have jurisdiction, said Kal Raustiala, professor of law and director of the Burkle Center for International Relations at UCLA.

Still, most countries believe that they can prosecute anyone who harms one of their citizens, regardless of location, he said. In the case of the U.S. and Mexico, no treaty covers this specific set of circumstances, he said.

If the Border Patrol agent went to Mexico for any reason, he could be subject to arrest, Raustiala said, and the U.S. would have difficulty arguing that Mexico was acting illegally. On the other hand, if Mexican authorities kidnapped the agent in the U.S. and took him to Mexico for trial - as the U.S. did in the case of a Mexican doctor involved in the torture and killing of a U.S. Drug Enforcement Administration agent - the U.S. could argue violation of its sovereignty, he said.

"It does seem unlikely that Mexico is actually going to be able to try this person," Raustiala said.

Both countries could agree to establish a claims commission that, depending on the ground rules, could just determine facts or go so far as to order compensation, said Jordan Paust, an international law expert at the University of Houston.

Theoretically, the case could go to the International Court of Justice, but the U.S. would have to agree to that, he said. Or the whole thing could be handled diplomatically.

Hernandez's family would also have the option of pursuing a civil case against the Border Patrol agent.

If Mexico requested extradition, normally the Obama administration would proceed with the request unless it is conducting its own criminal investigation and prosecution, Paust said. U.S. Attorney General Eric Holder would assign a federal prosecutor to represent Mexico's case before a U.S. magistrate or district judge.

If the U.S. felt there were no grounds for the request - for example, it was self-defense - Mexico could hire its own attorney to represent its case in federal court. That lawyer would have to first prove that Mexico had jurisdiction, then show that the alleged crime existed under both countries' laws, and finally would have to demonstrate that there was probable cause that the crime had been committed.

State Department spokesman P.J. Crowley said Thursday that the agency had received a formal diplomatic note from Mexico on Wednesday expressing concern about the shooting. Crowley reaffirmed the U.S. commitment to a transparent investigation.