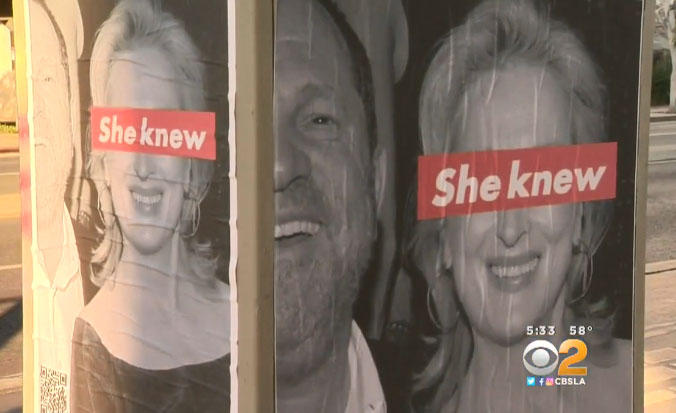 LOS ANGELES -- Posters depicting Meryl Streep with the words "She knew" went up Tuesday around Los Angeles after the actress said she didn't know Harvey Weinstein was allegedly harassing and assaulting women when they worked together, CBS Los Angeles reports.

Social media posts indicated posters were spotted near the SAG-AFTRA building, near Streep's Pasadena home, at the Hollywood and Highland complex, and across from the 20th Century Fox studio lot in Century City.

It wasn't immediately clear who was responsible for the campaign, though street artist Sabo – who recently targeted Minnesota Sen. Al Franken after he was accused of misconduct – denied any responsibility.

The posters followed a statement Monday from Streep saying Weinstein "needed me much more than I needed him and he made sure I didn't know." The Oscar winner says her association with him brought him credibility which, she says, he used "to lure young, aspiring women into circumstances where they would be hurt."

Streep says she composed the statement in response to a since-deleted tweet from Rose McGowan, who called out Streep for working with Weinstein. McGowan has alleged that Weinstein raped her.

McGowan had called Streep a hypocrite for a reported plan that she and other actresses would wear black at the Golden Globes to show unity with victims of sexual assault.

Streep says she's sorry McGowan sees her as an adversary because, according to Streep, they are on the same side in the fight to eradicate the status quo power structure in Hollywood.

Actress Amber Tamblyn, who says she is a friend of McGowan, also responded to her criticism by saying she does "not support any woman (or man) shaming or taunting the movements of other women who are trying to create change."