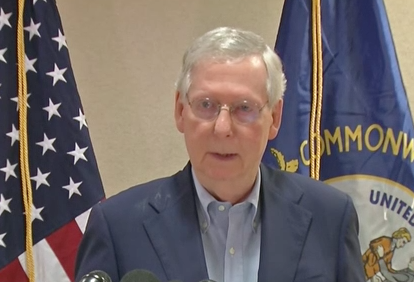 "We have noticed some energy pick-up on our side," said McConnell at a press conference in Kentucky on Monday. The leader said that while Democrats have been "anxious to send the president a message", the confirmation process provided the "kind of adrenaline shot we had not been able to figure out how achieve in any other way."

He said the "tactics" of the opposition "were very helpful, to me, in unifying our side."

McConnell added, "We think there's some evidence this is going to be very helpful to us next month."

"Think about it, there's no chance that an opposition party in control of the Senate is going to fill a Supreme Court vacancy occurring in the middle of a presidential election year, and that's why it hasn't happened since the 1880's," the leader said, which differs from the original argument he cited for refusing to give Garland a Senate hearing and vote. In Garland's case, McConnell argued that a nomination to the Supreme Court should not be considered before a presidential election.  "The American people should have a voice in the selection of their next Supreme Court Justice," McConnell said after Garland's nomination. "Therefore, this vacancy should not be filled until we have a new president."

In an appearance on "Fox News Sunday," McConnell did not rule out the idea that another Supreme Court justice during a presidential election year, saying, "We'll see if there's a vacancy in 2020."

McConnell on Monday argued that if control of the White House and the Senate had been reversed in 2016, Democrats wouldn't have filled a vacancy either.

"Everybody just smiled because they knew if it had been a Republican president and a Democratic Senate, they wouldn't have filled a vacancy," he said.

Looking ahead, McConnell said Democrats certainly "could" refuse to hold any nominations of any kind should they regain control of the Senate, but argued it wouldn't be "sustainable politically."

"It wouldn't be a good argument to make. I noticed one of the the Democratic senators said if they got back control of the Senate this year they would just not do any judges the next two years. I don't think that works politically."