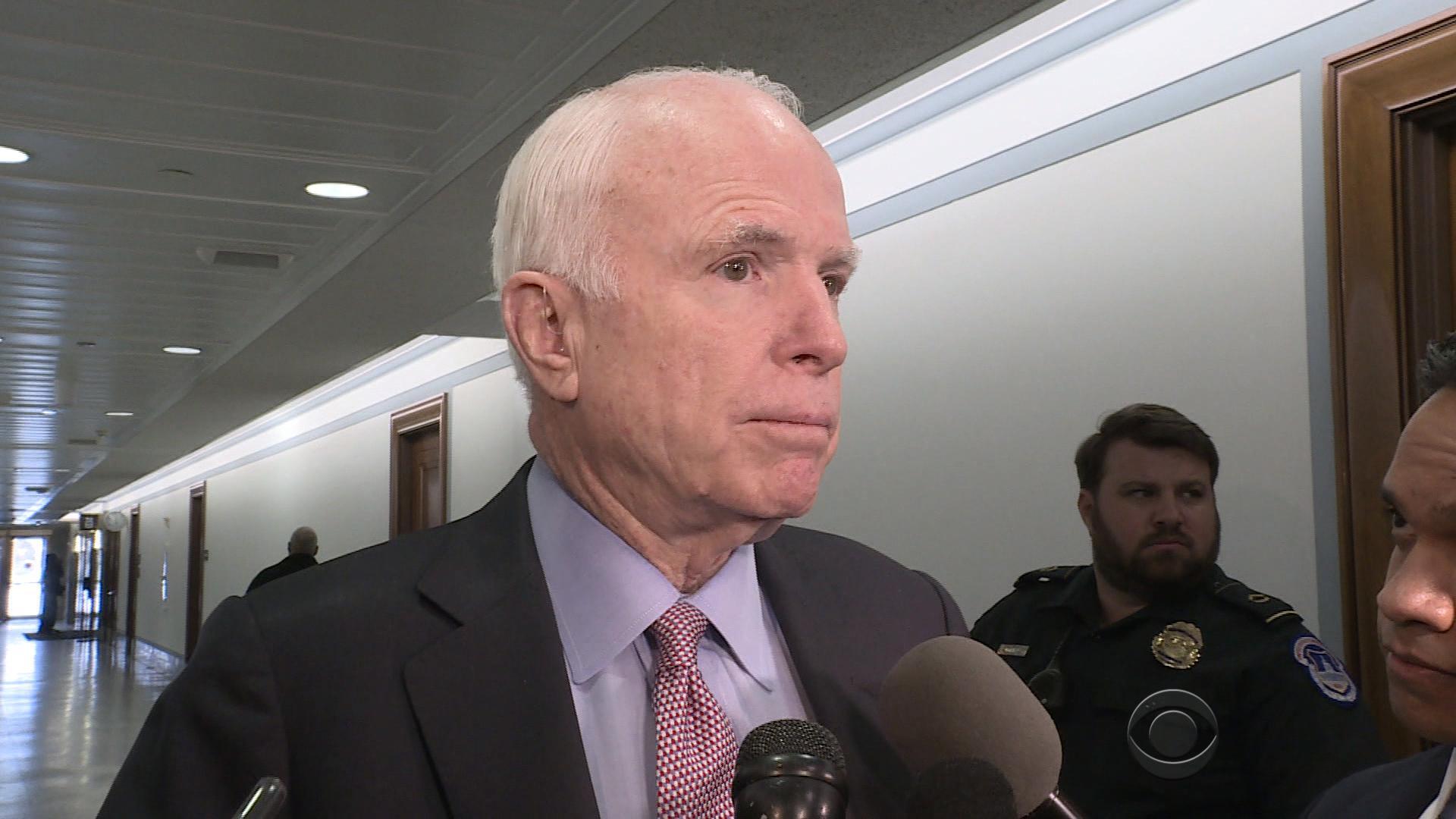 That comment came during an on-stage interview with CBS News' Bob Schieffer Tuesday night at a dinner honoring McCain. On Wednesday, Schieffer talked with "CBS This Morning" about his conversation with McCain.

"John McCain is deeply worried about this," Schieffer said. "I think he believes that Donald Trump is in serious trouble right now, and it it up to Donald Trump to get himself out of it."

The former "Face the Nation" anchor also said he talked with many Republicans Tuesday night, and "their feeling is that until they get this settled, not much is going to happen with the Trump administration." Settling that, Schieffer says, will demand more openness -- "he has got to get this all out on the table once and for all. Until he does that," he said, "we really don't know what's going to happen. But this thing has raised a notch."

McCain also had tough words for Russia when Schieffer asked him about Monday's revelation that Mr. Trump had disclosed classified information about an ISIS plot to Russian Foreign Minister Sergey Lavrov and Envoy Sergey Kisleyak.

After calling Lavrov "an old KGB stooge" and Putin a "murderer and a thug," McCain continued, "Being friendly with a guy whose boss, Vladimir Putin, sent sent aircraft with precision weapons to attack hospitals in Aleppo -- it is unacceptable. I would never every invite him into the Oval Office."

"When [McCain] said that, the room erupted in very heavy applause," Schieffer recalled. "I take that to mean Republicans are becoming worried about where this goes from here."

The Arizona Republican was interviewed by Schieffer at the International Republican Institute's 2017 Freedom Dinner.

McCain's comments are some of the strongest comments yet to come from a Republican. Even after the Tuesday night revelation of the memo, GOP members have hesitated to criticize the president, although pressure to do so is mounting.

Republican House Oversight and Government Reform Committee Chairman Rep. Jason Chaffetz on Tuesday night asked Acting FBI Director Andrew McCabe for any records documenting communication between Mr. Trump and Comey, and all 33 Democrats on the House Judiciary Committee and House Oversight and Government Reform Committee asked their Republican chairmen for a full-blown investigation into the president and his top White House aides.

McCain on Tuesday night said the president is dealing with a pretty smart lawyer, noting that Comey distributed the memo to others.

According to the memo, the day after Flynn submitted his resignation in February, Mr. Trump met with Comey in the Oval Office and told him: "I hope you can see your way clear to letting this go, to letting Flynn go. He is a good guy. I hope you can let this go."

News of the memo, first reported by The New York Times, comes only 24 hours after a report that the president shared "inappropriate" information with Russian diplomats in a meeting closed to the press last week, the day after firing Comey.