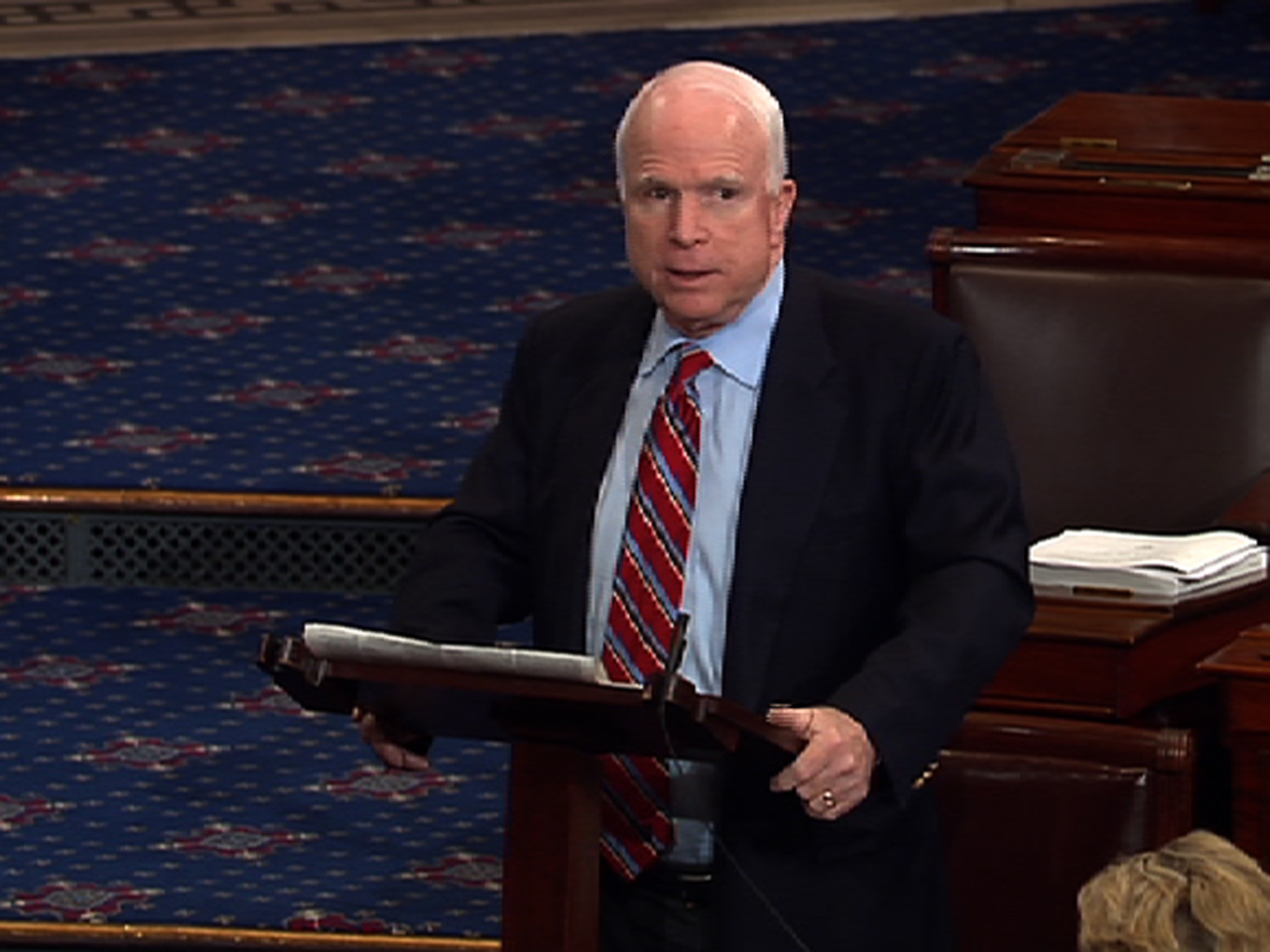 Several hours before the Senate confirmed CIA director nominee John Brennan, McCain and Sen. Lindsey Graham, R-S.C., joined in colloquy on the floor to condemn the premise for Paul's filibuster on the vote. Paul's objection was to the administration's recent assertion that it could legally deploy a drone missile to target an American on U.S. soil in "extraordinary" circumstances that posed an "imminent" threat to national security.

Answering the question, "Does the president have the authority to use a weaponized drone to kill an American not engaged in combat on American soil?" White House press secretary Jay Carney today read a statement from Attorney General Eric Holder: "The answer to that question is no."

Senate Majority Leader Harry Reid, D-Nev., lauded Paul on Thursday morning for returning to regular order in the chamber. But the filibuster lent credence to "those who say the rules of the Senate are being abused," McCain argued, wagging his finger at several GOP colleagues who joined the junior Kentucky senator in his effort Wednesday and early Thursday but should "know better" than to level a filibuster for a "totally unfounded" point.

McCain took particular issue with one example Paul tendered Wednesday - that Jane Fonda during the Vietnam War could have been considered an enemy to the state. Paul wondered: Would the United States under President Obama have dropped "a drone hell-fired missile on Jane Fonda?"

"I must say that the use of Jane Fonda's name does evoke certain memories with me," McCain said, "and I must say that she is not my favorite American. But I also believe that, as odious as it was, Ms. Fonda acted within her constitutional rights. And to somehow say that someone who disagrees with American policy - and even may demonstrate against it - is somehow a member of an organization which makes that individual an enemy combatant, is simply false."

Graham singled out a different example, repeated by Paul several times: Will the president OK a drone strike on an American sitting at a U.S. coffee shop drinking a cappuccino?

"I find the question offensive," Graham said, arguing that it "cheapens the debate" on U.S. drone use. "I do not believe that question deserves an answer."

Stating that drones for military purposes are used in places like Pakistan and Afghanistan when geologic difficulties like terrain preclude ground operations, Graham said of the person sitting in a café: "We don't want to blow up the café; we want to go in there and grab the person for intelligence purposes." Noncombatants, he said, "under the law of war are protected - not subject to being killed randomly.

"...To take this debate into the absurd, Graham continued, "is what I object to."