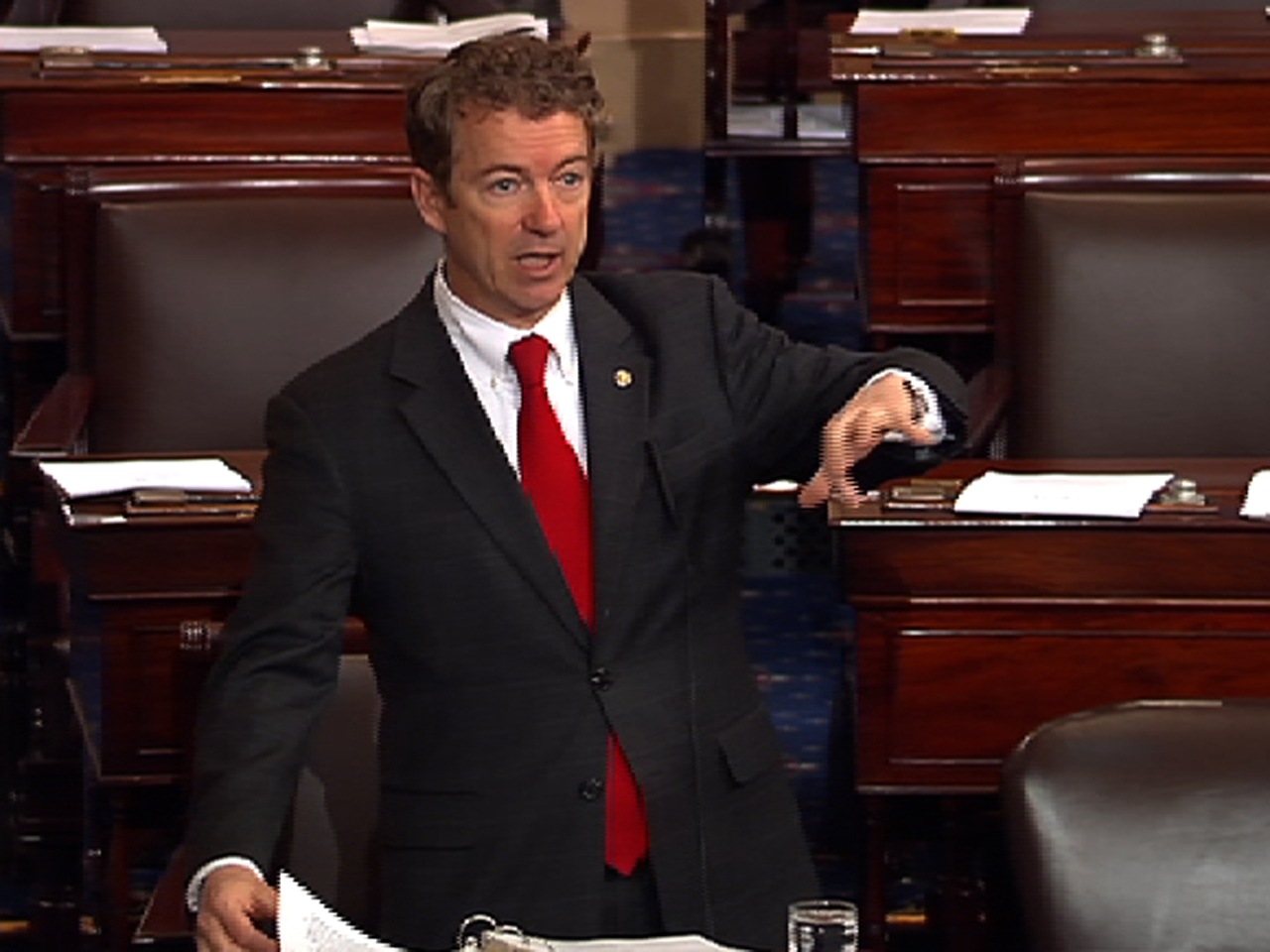 The morning after spearheading an hours-long, old-fashioned congressional filibuster that lasted well into the night, Sen. Rand Paul, R-Ky., expressed gratitude to his fellow lawmakers for their "outpouring of support," and continued pushing for increased access to information about the nation's controversial drone policy.

Paul, who held court on the Senate floor for nearly 13 hours without a single bathroom break, said he was "amazed" by the encouragement from his fellow Republican lawmakers - and even a stray Democrat.

"We probably had 15 congressmen come over to the Senate floor," he said this morning in a radio interview with Glenn Beck. Paul pointed out that House members are allowed to come to the Senate floor but are barred from speaking or coming forward, so they were presumably there just to lend support with their presence. "I've never seen that happen before. And they came spontaneously. Nobody called them. They just showed up."

Even Senate Majority Leader Harry Reid, D-Nev., whose efforts to schedule a confirmation vote for John Brennan to be CIA director were stymied by Paul's filibuster, had praise for the Kentucky senator.

"One thing I learned from my own experience with talking filibusters: To succeed, you need strong convictions but also a strong bladder. Senator Paul has both," Reid said on the Senate floor this morning.

Paul, a staunch libertarian with Tea Party leanings, was protesting Brennan's confirmation and has said that Brennan, Mr. Obama's top counterterrorism official, serves as a proxy for his larger case against the nation's controversial targeted killing policy, particularly the notion that the U.S. authorizes the use of military force against Americans on U.S. soil in some cases of "extraordinary circumstance."

"We may not all be on all the same page on drone strikes here there and hither and yon, but on American soil we came together and said, you know what, we're not going to do targeted strikes of people not engaged in combat in America," Paul said this morning, referring to the lawmakers who came out in support of him. Among those who showed up to the Senate floor Wednesday night was Sen. Ron Wyden, D-Ore., a staunch opponent of the drone policy.

Paul tried to explain this morning his broader argument about the potential dangers of authorizing a policy that he says could have wide-reaching consequences in the future.

"I try to make it less about President Obama and more about, what if someday we elect someone who wouldn't - who would abuse this power? And I think when you make it in those generic terms, people can be concerned with it," Paul said. "It's dangerous any time you use an example of Hitler, because everybody thinks you're over exaggerating, but Hitler was elected democratically, so democracies can make mistakes. And that's why you want the rule of law to restrain them and not let them do that."

Paul also noted that he and several members of his staff carry rifles around with them.

This morning, Reid said he filed cloture on Brennan's nomination, and that if unanimous consent cannot be reached, the Senate will weigh in on whether or not to proceed with a vote for his confirmation on Saturday morning. Paul says he will not agree to vote for cloture until he gets a statement from the Obama administration saying "that they're not going to target Americans who are not engaged in combat."

"I can make them stay here through Saturday and they hate to work on weekends," he quipped.