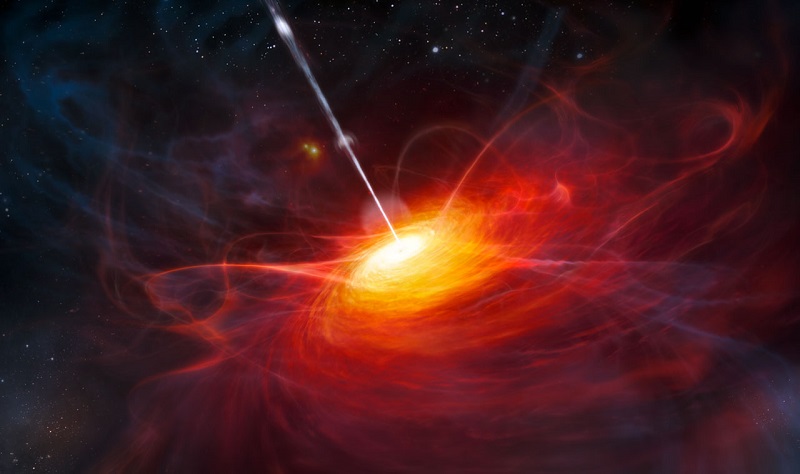 You might call it the mother of all black holes.

Scientists say they have discovered a black hole with a mass 12 billion times that of the sun that formed only 900 million years after the Big Bang. The massive black hole was found at the center of a quasar that pumped out a million billion times the energy of our Sun.

By comparison, our own Milky Way Galaxy has a black hole with a mass of only 3 million solar masses at its center. Black holes are stars whose gravitational force pulls in everything around them.

"Many astronomers didn't expect something so massive could exist so early in the universe," Xiaohui Fan, of the Steward Observatory at the University of Arizona, and a co-author on the study of the discovery reported Wednesday in the journal Nature, told CBS News.

"Black holes take time to grow," he said. "It starts from a seed and grows over time. Then slowly, over time it accrues material to make it bigger and bigger. This is one is a giant but more like a baby in age."

Max Planck Institute for Astronomy's Bram Venemans, in an article accompanying the study, said he was flummoxed by how fast this black hole formed.

"Theoretically, it is not implausible to find a black hole of more than 10 billion solar masses within 1 billion yeas after the Big Bang," he wrote. "But it is still surprising to uncover such a massive black hole in the early Universe."

At the center of this black hole was the quasar, a bright cloud that represents all the material being gobbled up. Named SDSS J0100+2802, the quasar was about 420 trillion times brighter than the sun.

"This quasar is very unique. We were so excited when we found that there is such a luminous and massive quasar only 0.9 billion years after the Big Bang," Peking University's Xue-Bing Wu, one of the co-authors on the Nature paper. "Just like the brightest lighthouse in the distant universe, its glowing light will help us to probe more about the early universe."

Discovered in 1963, quasars are the most powerful objects beyond our Milky Way Galaxy. Thanks to the arrival of powerful telescopes and advances in digital sky surveys used in this and other studies, astronomers have discovered more than 200,000 quasars, with ages ranging from 0.7 billion years after the Big Bang to today.

"It's revolutionized astronomy," said Fan, whose group used the Sloan Digital Sky Survey, the Two Micron All Sky Survey, and the Wide-field Infrared Survey Explorer to find this and many other quasars. "This allows you to data mine all kinds of phenomena in the universe much more effectively."

Astronomers focus on quasars because they are the brightest objects in the universe, making them easy to spot but also offer a beacon of sorts to track the universe's evolution.

"It will travel through space and cast signature of gas along the way," Fan said of quasars. "So, you can use them to study the material between you and the quasar in intergalactic space."

Among the questions Fan and others now want to understand is the relationship of this black hole and their surrounding galaxy and how galaxies formed in the early universe. The quasar too, can also be used to study the distant cosmos and the star-formation process soon after the Big Bang.

"These giants of the universe will provide the ideal targets from which to learn about the universe during the first few hundred million years after the Big Bang," Venemans wrote.