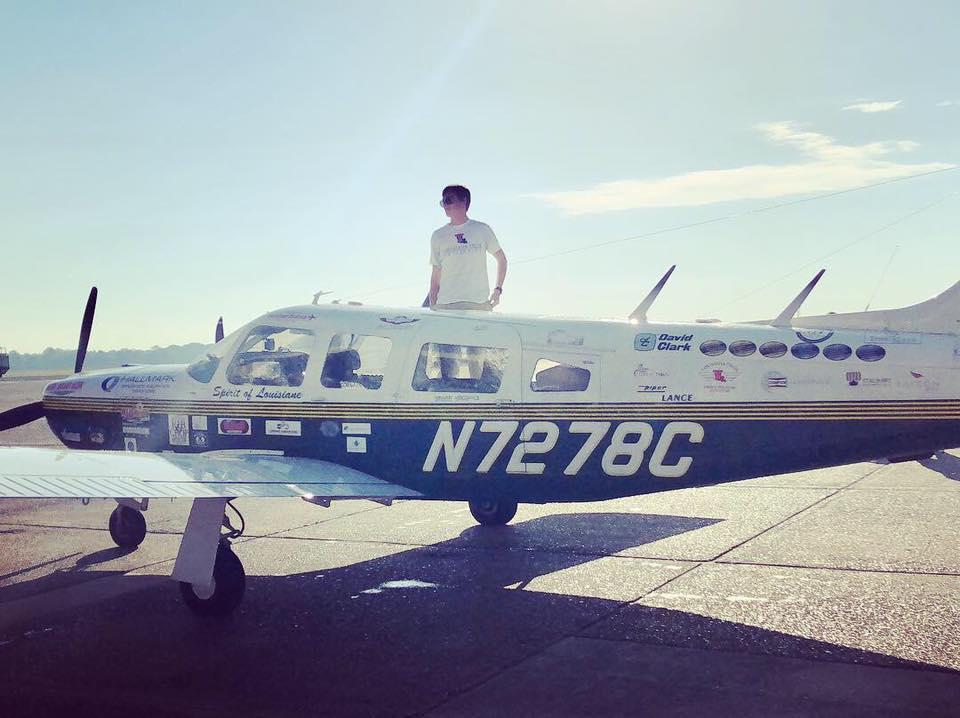 A Louisiana teenager flew for 10 ½ hours through a sandstorm over Saudi Arabia, got stuck in the Philippines by typhoons, and set three youth aviation records. Flying entirely by instruments through the sandstorm's turbulence was the worst part of the trip, 18-year-old Mason Andrews, of Monroe in northeast Louisiana, said Monday. "It seemed like a hundred hours."

"The highlight was flying into Paris. I saw the Eiffel Tower on the approach — I landed at night," he said in a telephone interview from Louisiana Tech in Ruston. On the ground, "I went and saw it all lit up and walked along the Seine ... I was able to realize, 'I just flew across the Atlantic Ocean!'"

He'd planned to spend two nights in the Philippines, but three typhoons — two of them Category 5 — kept him at Subic Bay from Sept. 2-21. "Jebi and Mangkhut were the biggest typhoons in ages," he said.

Between Subic Bay and Naha, Okinawa, his radio went out and, trying to avoid bad weather, he strayed into Taiwan's airspace. "I was intercepted by a Taiwan F-16," Andrews said.

Was it scary? "A little bit. It was cool to see." Andrews said he'd have liked to take a photo, but "I didn't want to provoke the guy. I knew he could see me."

He edged back into Japanese airspace and the incident was over.

The aviation records aren't official yet, but Andrews doesn't expect any problems being certified as the youngest pilot to fly solo around the world and over the Atlantic and the Pacific oceans.

He was 18 years, 163 days old when his Piper PA-32 Lance, called The Spirit of Louisiane, touched down Saturday in Monroe — 71 days younger than Lachlan Smart of Queensland, Australia, at the end of his solo flight in 2016.

Andrews will submit a fat file of documentation both to the Fédération Aéronautique Internationale , which certifies international air sport records, and to Guinness World Records. "I know I did it. I'll send them the information and get to work," he said.

Guinness will certify only one record, the circumnavigation, he said, but the Federation will look at all three.

His father, Jeb Andrews, said his son first pitched the trip as a solo Atlantic crossing. "He came to us about three times. I said 'No' every time," he recounted.

Finally, impressed with the information Mason had put together, he and his wife said yes. Not until later did they realize he had the entire worldwide trip planned. He added, "It got darn difficult. And I'm proud he stuck to his goals and made it happen."

"The community was so supportive, the messages from people in the community, people we didn't even know," Jeb Andrews told KTVE.

Andrews, who is majoring in professional aviation at Louisiana Tech, faces catch-up work in some tough college courses, since the trip took 76 days rather than the 40 he'd planned on. The trip's 180 hours brings him about halfway to the 1,000 he needs for an airline transport pilot rating, but won't count toward his commercial or flight instructor's licenses, he said.

University President Les Guice greeted him at the airport Saturday with a $10,000 scholarship from the Louisiana Tech Foundation. That will be a huge help both with expenses from the trip and school expenses, Andrews said. Louisiana's TOPS scholarship covers tuition, but not such expenses as flight fuel and time.

Andrews said the round-the-world flight raised about $30,000 for MedCamps of Louisiana, which runs free summer camps for children who have disabilities or illnesses. Andrews has worked at his local camp three summers running as a counselor.

He said about 20 of the children he's worked with there were among about a thousand people who were at the Monroe airport to greet him Saturday.

"I will be attempting another aviation world record. No details yet. But there are more plans in the future," he said.