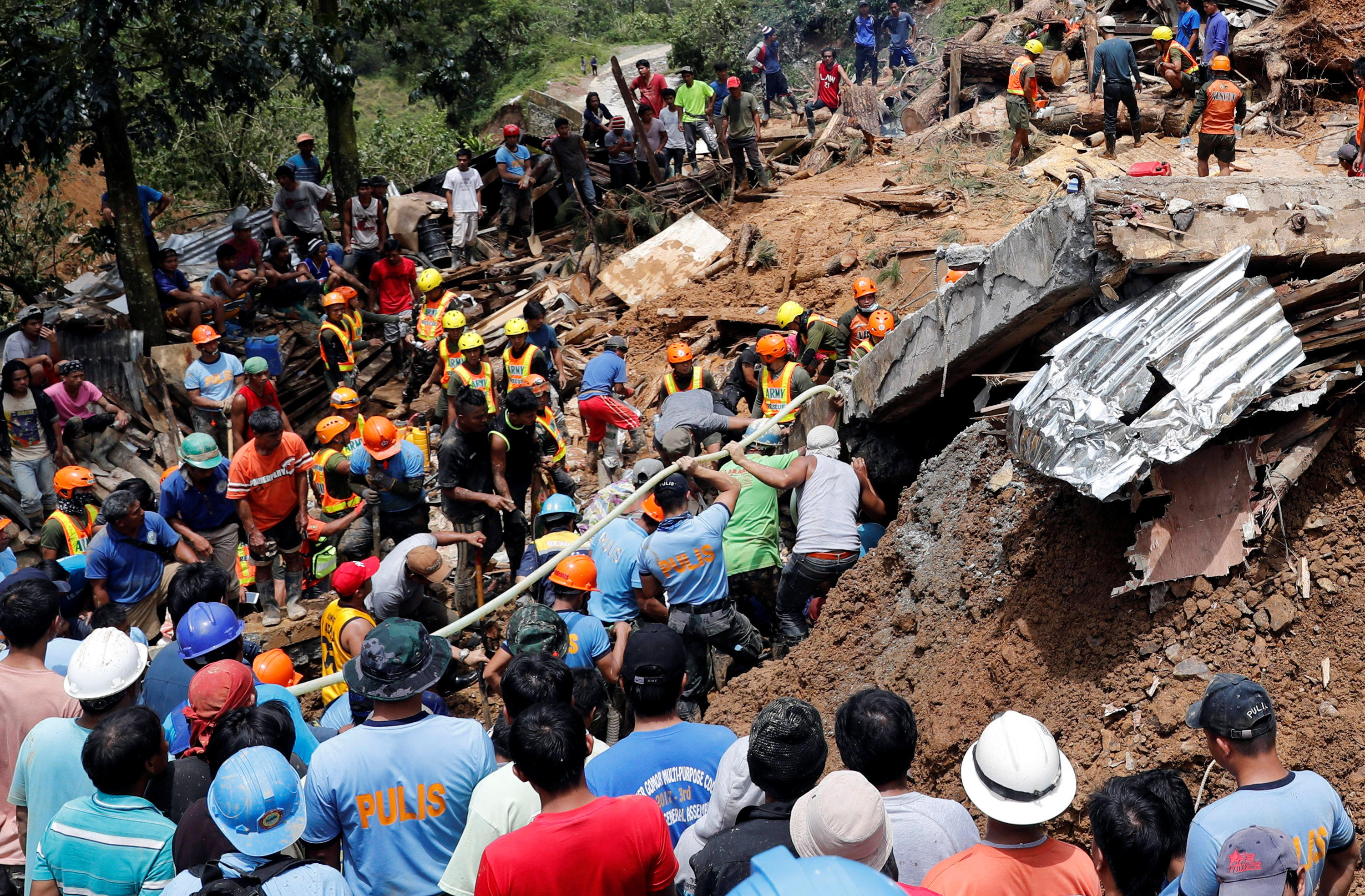 ITOGON, Philippines -- Philippine and Chinese authorities said Monday that the death toll from a massive typhoon had risen to at least 69, with dozens of people still missing. Typhoon Mangkhut weakened to a tropical storm on Monday morning as it moved deeper into southern China, where rain and strong winds were expected to continue through Tuesday.

Many of the missing in the Philippines are gold miners and their families feared buried in a landslide after seeking shelter in a bunkhouse-turned-chapel in a village in Benguet province.

CBS News correspondent Ben Tracy says Mangkhut slammed into the Philippines on Saturday with the strength of a Category 5 hurricane -- packing winds near 180 miles per hour before slamming into southern China on Sunday.

It was the most powerful typhoon to hit Hong Kong since 1979, with winds of 121 miles per hour. The fierce winds tore through the streets, tearing down hundreds of trees in Hong Kong and causing extensive flooding.

The mayor of the Philippine village where the gold miners and their families were buried by the landslide said Monday that it was highly unlikely any of the 40 to 50 people feared missing would be found alive.

Mayor Victorio Palangdan of Itogon town, among the worst-hit by the typhoon that struck Saturday, said in a news conference that there was a "99 percent (chance) that they really are all dead."

Palangdan said rescuers had dug out 11 bodies from a muddy mound covering a former miners' bunkhouse which had been turned into a chapel. Dozens of residents sought shelter there during the storm on Saturday, despite warnings it was dangerous.

"They laughed at our policemen," he said. "They insisted. They were resisting when our police tried to pull them away. What can we do?"

Hundreds of rescuers, including police and soldiers, scrambled to search for the missing as grief-stricken relatives waited nearby, many of them quietly praying.

The disaster has prompted the Philippine government to order a stop to all illegal mining in six mountainous northern provinces in a drastic decision to prevent more tragedies.

Cimatu said army troops and police would be deployed to enforce the ban, which covers about 10,000 small miners in Itogon town.

The storm was still affecting southern China's coast and the provinces of Guangdong, Guangxi and Hainan on Monday morning and rain and strong winds were expected to continue through Tuesday. Gusts of 100 mph were still lashing Hong Kong, and more than 2.5 million people had been evacuated from the region.

But by and large, life was gradually returning to normal along the hard-hit southern Chinese coast on Monday, where high-rises swayed, coastal hotels flooded and windows were blown out as a result of Typhoon Mangkhut.

Rail, airline and ferry services have been restored and casinos in the gambling enclave of Macau have reopened for business.

In Hong Kong on Monday, crews were clearing fallen trees and other wreckage left when the financial hub felt the full brunt of the storm on Sunday.