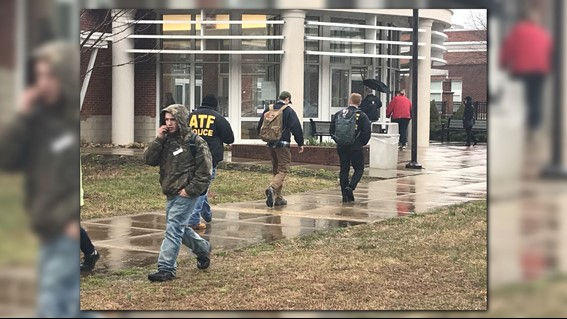 Sixteen-year-old Jaelynn Willey is in critical condition after she was wounded by a gunman at Great Mills High School in Maryland Tuesday. Another student who was shot is in good condition.

A school resource officer stopped the gunman but it is still unclear if the gunman was killed by the SRO or by a self-inflicted wound. Authorities are examining security camera footage and have searched his home to determine the motive.

Shortly before opening bell at Great Mills High School on Tuesday, 17-year-old Austin Rollins opened fire in a hallway with a semi-automatic handgun shooting Willey and a 14-year-old boy.

Rollins' neighbor, Aaron Foreman, is surprised that the same boy that played catch with his son could do this.

"For the school and for the school system and for Great Mills, a lot of those teachers and students, their lives are never going to be the same again," Foreman said.

Officers were quick to clear the classrooms as students hid under their desks. Investigators say deputy Blaine Gaskill, an armed school resource officer and former SWAT team member, responded within a minute, firing one round.

Rollins fired his gun at the same time and was later pronounced dead. Gaskill was not injured.

"I didn't really believe that something like this would happen to a school near me," said Makayla Bonds, a student at nearby Leonardtown High School.

Sheriff Tim Cameron says investigators believe Rollins may have targeted Willey and that there is an indication a "prior relationship existed" between the two. He says deputy Gaskill did exactly what he was supposed to do.

This is the latest incident involving a school resource officer. In this case, Gaskill stopped the shooter in less than a minute, but just last week, an SRO accidentally discharged his weapon in Virginia and last month in Parkland, Florida, the school resource officer waited outside the building for the entire six-minute shooting that killed 17.

72-year-old on how her dog helped her survive 9 days in Ariz. wilderness

How to stand out when applying to colleges