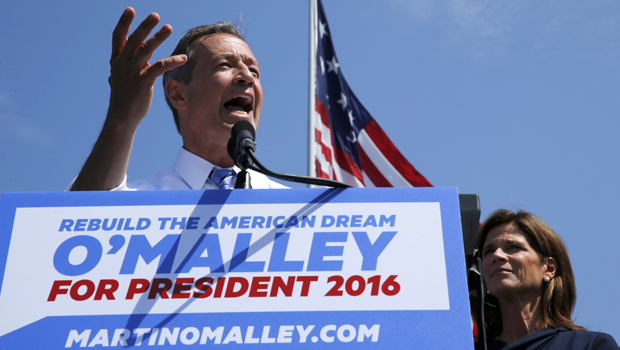 "Together, as one nation, we must build an American economy that works again for all of us," O'Malley told a crowd gathered at a Baltimore park. "That means good jobs and wage policies that allow hardworking families to actually get ahead. That means a higher minimum wage, overtime pay for overtime work and respect for the rights of all workers to organize and collectively bargain for better wages."

O'Malley is positioning himself as a liberal alternative to former Secretary of State Hillary Clinton, staking out progressive positions on same-sex marriage, immigration and Wall Street reform.

"We are allowing our land of opportunity to be turned into a land of inequality. Main Street struggles while Wall Street soars," O'Malley said. "Tell me how it is that not a single Wall Street CEO was convicted of a crime related to the 2008 economic meltdown. Not. A. Single. One."

"This is not how our economy is supposed to work," the Democratic presidential candidate said.

"Recently, the CEO of Goldman Sachs let his employees know that he'd be just fine with either Bush or Clinton," the former Maryland governor said. "The presidency is not a crown to be passed back and forth by you between two royal families."

"We cannot rebuild the American Dream here at home by catering to the voices of the privileged and the powerful," he added. "Let's be honest. They were the ones who turned our economy upside-down in the first place. And they are the only ones who are benefiting from it."

Pointing to his progressive bona fides, O'Malley highlighted his 2012 signing of a same-sex marriage bill and his 2013 passage of the DREAM Act, which allowed undocumented high school students to pay lower tuition rates at their higher education institutions.

The scene of O'Malley's announcement -- a Baltimore park -- highlights his political roots. O'Malley, who served on the city council and then became Baltimore's mayor from 1999 to 2007, has heavily touted his executive experience and his record on reducing crime rates in the city. Where Baltimore was once known as one of the most dangerous cities in America, O'Malley's stint in office saw crime rates in the city fall by over 40 percent.

"Together, we made our city a safer, healthier and better place for kids," he said Saturday.

But since violent protests rocked west Baltimore following the death of Freddie Gray, a 25-year-old black man who died while in police custody, the growing distrust and frustration between the community and its police force have rapidly moved into the spotlight.

"Last month, television sets around the world were filled with the anger and the rage and the flames of some of the humblest and hardest-hit neighborhoods of Baltimore," O'Malley said in a nod to the protests. "For all of us who have given so much of our energies to making our city a safer, fairer, more just and more prosperous place, it was a heartbreaking night in the life of our city."

The dissatisfaction with O'Malley's aggressive law enforcement tactics has already started to dog the fledgling campaign. Protesters had been expected to appear at the campaign launch, though the activities were reportedly scaled back due to accessibility restrictions.

Over the last year, O'Malley has been gearing up for this presidential announcement with several trips across early-voting states. And his supporters announced last week the formation of a super PAC, Generation Forward, to provide the campaign with fundraising heft.

Still, the former Maryland governor still has work to do when it comes to name-recognition. A CBS News poll earlier this month showed 11 percent of registered Democrats would consider voting for O'Malley. He is the third to announce his bid for the Democratic nomination, joining Clinton and Vermont Sen. Bernie Sanders in the 2016 race.