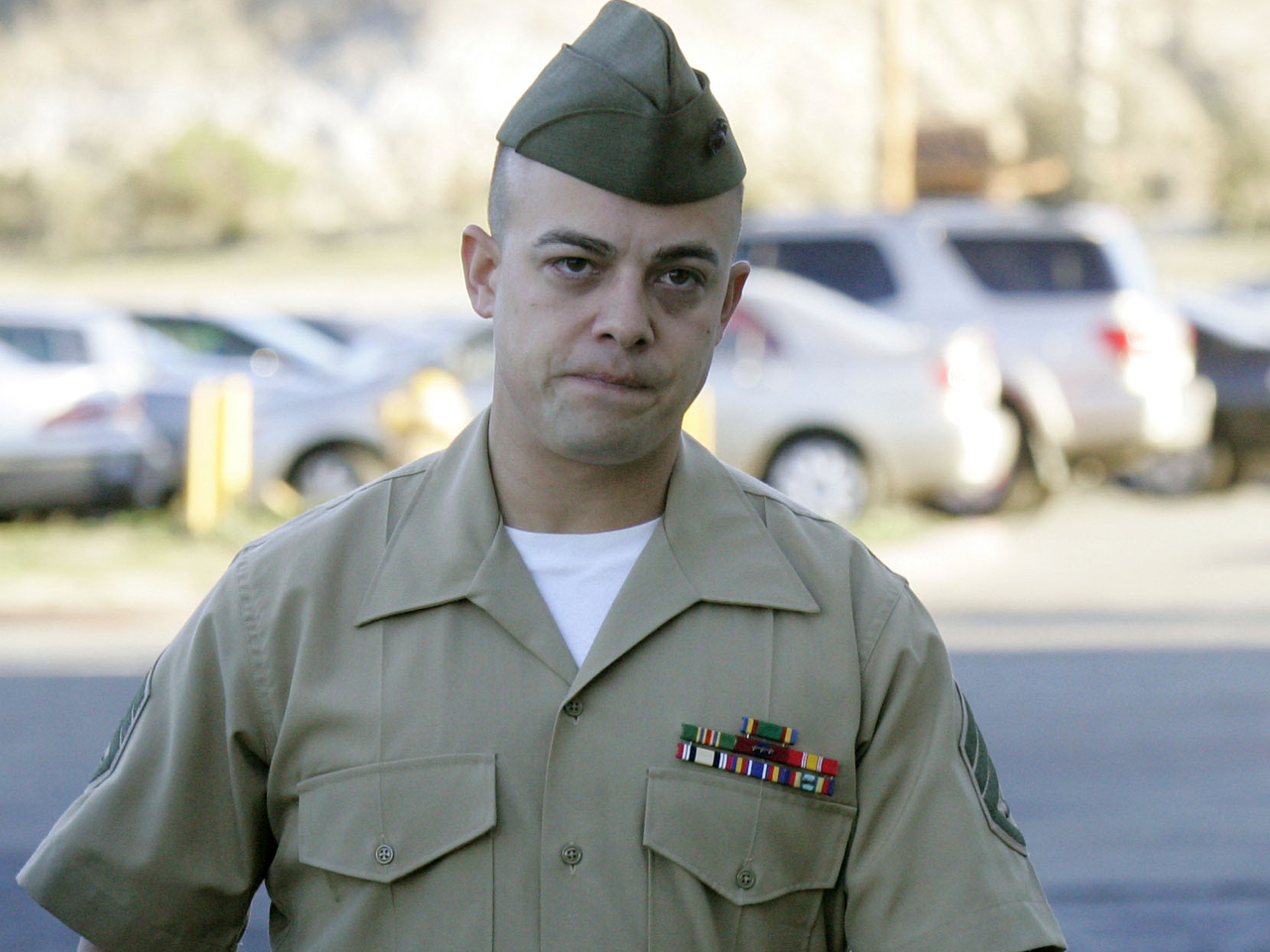 CAMP PENDLETON, Calif. - A Marine accused of killing unarmed Iraqi women and children pleaded guilty Monday to dereliction of duty in a deal that will mean a maximum of three months confinement and end the largest and longest-running criminal case against U.S. troops to emerge from the Iraq War.

Staff Sgt. Frank Wuterich of Meriden, Conn., led the Marine squad in 2005 that killed 24 Iraqis in the town of Haditha after a roadside bomb exploded near a Marine convoy, killing one Marine and wounding two others.

It was a stunning and muted end to a case once described as the Iraq War's version of the My Lai massacre in Vietnam.

The incident in Iraq is considered among the war's defining moments, further tainting America's reputation when it was already at a low point after the release of photos of prisoner abuse by U.S. soldiers at Abu Ghraib prison.

Eight Marines were charged with killing the Iraqis, with Wuterich facing the possibility of life behind bars. In the end, seven Marines were acquitted or had charges dropped, and Wuterich pleaded to the single, minor charge.

The killings still fuel anger in Iraq after becoming the primary reason behind demands that U.S. troops not be given immunity from their court system.

Wuterich's plea interrupted his trial at Camp Pendleton before a jury of combat Marines who served in Iraq.

In a hearing to determine if the facts of the plea were accurate and that he agreed, Wuterich acknowledged he was negligent in his duties because he told his squad to shoot first and ask questions later, or words to that effect.

Later he added: "I shouldn't have done that and it resulted in tragic events, sir."

Wuterich acknowledged he had been trained in rules of engagement before going to Iraq and again when he was deployed.

He admitted he did not positively identify his targets, as he had learned to do in training. He said he ordered his troops to assault the homes based on the guidance of his platoon commander at the time.

Wuterich faces a maximum of three months confinement, two-thirds forfeiture of pay and a rank demotion to private when he's sentenced, likely on Tuesday. The plea agreement calls for manslaughter charges to be dropped.

"No one denies that the events ... were tragic, most of all Frank Wuterich," defense attorney Neal Puckett told the North County Times. "But the fact of the matter is that he has now been totally exonerated of the homicide charges brought against him by the government and the media. For the last six years, he has had his name dragged through the mud. Today, we hope, is the beginning of his redemption."

The issue at the court martial was whether Wuterich reacted appropriately as a Marine squad leader in protecting his troops in the midst of a chaotic war or disregarded combat rules and ordered his men to shoot and blast indiscriminately at Iraqi civilians.

Wuterich was charged with nine counts of manslaughter, among other charges.

Prosecutors said he lost control after seeing the body of his friend blown apart by the bomb and led his men on a rampage in which they stormed two nearby homes, blasting their way in with gunfire and grenades. Among the dead were women, children and elderly, including a man in a wheelchair.

The prosecution was further hurt by the testimony of Wuterich's former platoon commander who said the squad was justified in its actions because the house was declared hostile, and from what he understood of the rules of combat at the time that meant any use of force could be used and Marines did not need to positively identify their targets.

Wuterich has said he regretted the loss of civilian lives but believed he was operating within military combat rules.

After Haditha, Marines commanders ordered troops to try and distinguish between civilians and combatants.

The trial was delayed for years by pre-trial wrangling between the defense and prosecution, including over whether the military could use unaired outtakes from an interview Wuterich gave in 2007 to "60 Minutes." Prosecutors eventually won the right to view the footage.