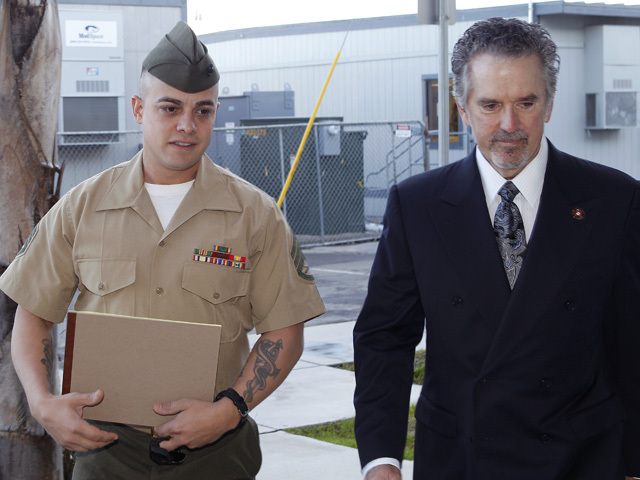 CAMP PENDLETON, Calif. - A Marine sergeant charged in the biggest criminal case against U.S. troops in the Iraq war made a series of fatal assumptions and lost control of himself when he and his squad killed 24 Iraqis, including unarmed women and children, a military prosecutor said Monday.

Maj. Nicholas Gannon made the accusations to a jury of battle-hardened Marines hearing the case against Staff Sgt. Frank Wuterich more than six years after the squad committed the killings in the town of Haditha.

"The evidence will show that none of the victims were a threat," Gannon told jurors in his opening statement.

Prosecutors told the military jury of four officers and four enlisted Marines that Wuterich repeatedly shot and did not ask questions.

In one house, Gannon said, he stood at the foot of a bed in a back bedroom, spraying a woman and children with bullets.

Haditha massacre defendant: We did what we had to
Last defendant in Iraq war case to stand trial
Jury selection resumes in Marine Haditha trial

In its opening statement, the defense raised doubts that Wuterich was in the back bedroom and tried to shift the blame for the deaths to another Marine.

Attorney Haytham Faraj told jurors the Navy investigators under pressure to show the Marine Corps was not covering up the massacre "brutally interrogated" the other Marines in the squad for up to 14 hours and offered to drop charges against them if they testified against their squad leader.

"You have a bunch of scared Marines promised immunity who are going to tell you about things that did not happen," Faraj said.

Faraj, a retired Marine, asked jurors to apply their knowledge of the Marine Corps and combat experience when judging the case.

He said Wuterich's battalion had been told by commanders that intelligence reports indicated the city was becoming a hotbed of insurgents. The day of the killings, he said Haditha was "abuzz with activity" with troops making more than 20 arrests and engaging in gunfire.

"We don't believe there was a crime committed here," Faraj said. "It was the unfortunate result of an attempt to do the right thing, but it turned out to be tragic."

Wuterich is charged with voluntary manslaughter in nine of the deaths and with other crimes. He has said he regretted the loss of civilian lives but believed he was operating within military combat rules.

He is the last of the eight Marines initially accused of murder or failure to investigate the killings to face trial. Six had charges dropped or dismissed, and one was acquitted.

Gannon also referred to excerpts from an interview of Wuterich by "60 Minutes" in which he said he believed none of the Marines with him went against his orders and they did their job.

Watch the "60 Minutes" interview below:

"They did it well," Wuterich told the news program.

The killings in Haditha on Nov. 19, 2005, are considered among the war's defining moments, further tainting America's reputation when it was already at a low point after the release of photos of prisoner abuse by U.S. soldiers at Abu Ghraib prison.

A full investigation didn't begin until a Time magazine reporter inquired about the deaths in January 2006, two months later.

Military prosecutors face an uphill battle trying to prove, so many years after the killings, that Wuterich's actions were criminal, legal experts say.

The civilians were killed when his squad used grenades and gunfire to clear several homes in the town after a roadside bomb exploded near a Marine convoy, killing one Marine

Others believe the military jury will be better equipped for the case over a civilian one in which people may not feel comfortable judging what is considered to be an appropriate reaction in the chaos of war.

Many of the jurors carried out house-clearing operations like the one Wuterich ordered.

"Military jurors may say look tens of thousands of us went to war zones and didn't kill civilians, but they may also be willing to consider the fact that the individual may have been caught in the fog of war," said former Navy officer David Glazier, a professor at Loyola Law School in Los Angeles.

Disputes — including over whether a military court should order CBS News to hand over unaired outtakes of a 2007 interview Wuterich gave to "60 Minutes" — stalled the case for years before prosecutors ultimately won the right to view them.

Wuterich has completed his service but can't leave the military until his case has been resolved. He has been working a desk job at Camp Pendleton awaiting trial.