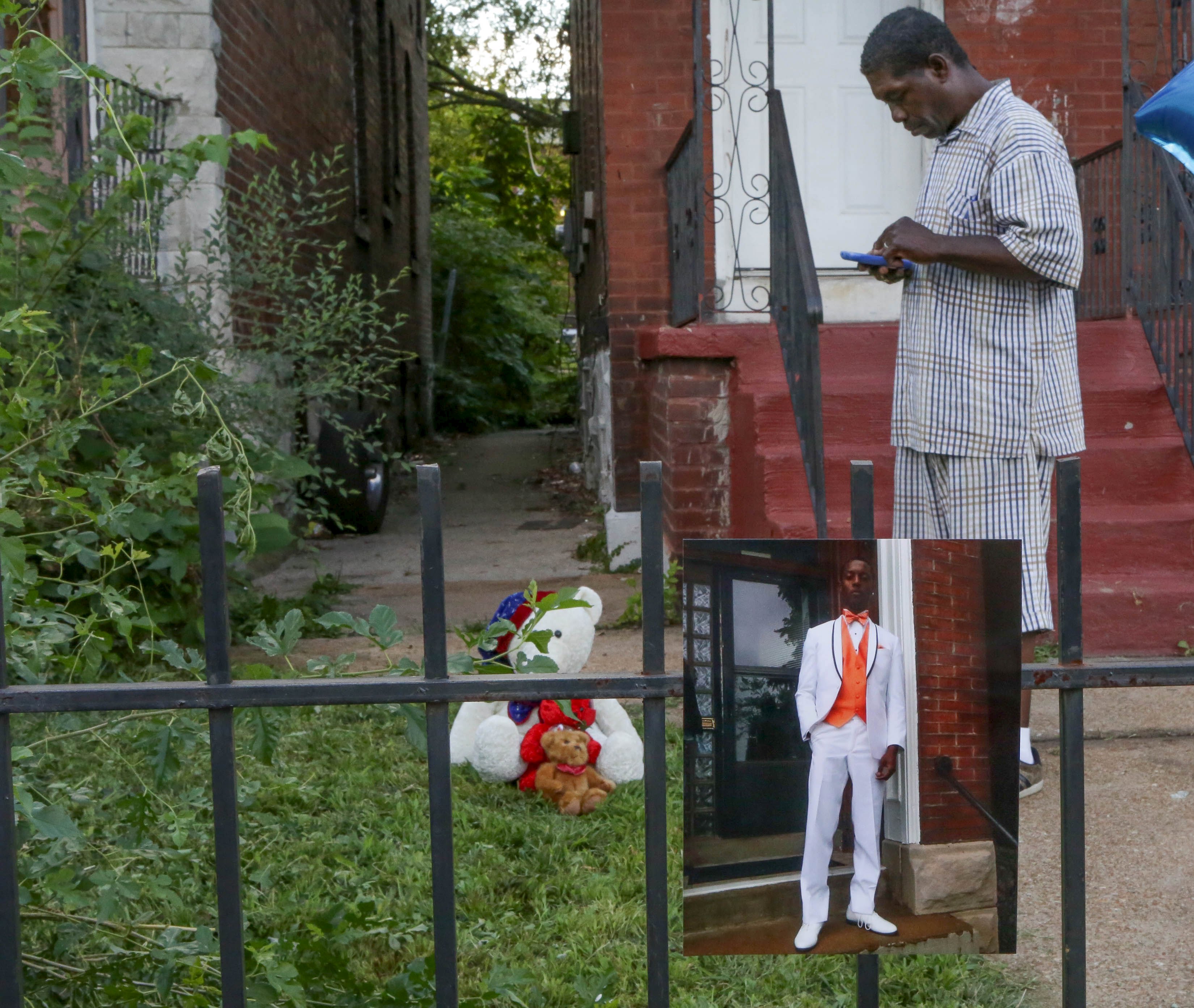 The St. Louis police chief says an autopsy shows that a black 18-year-old who was shot and killed by a white officer this week died from a single wound in the back, the St. Louis Post-Dispatch reported.

Mansur Ball-Bey, who police said had a handgun, was shot as officers raided a home in a violence-plagued part of north St. Louis. Within an hour of Wednesday's shooting, more than 100 people converged on the scene, taunting officers and decrying the use of deadly force.

Chief Sam Dotson told the St. Louis Post-Dispatch that the autopsy results are inconclusive and an investigation continues.

"Just because he was shot in the back doesn't mean he was running away," Dotson told the newspaper. "It could be, and I'm not saying that it doesn't mean that. I just don't know yet.

Dotson added: "What I do know is that two officers were involved and fired shots, but I don't know exactly where they were standing yet and I won't know until I get their statements."

A University of Missouri-St. Louis criminologist, David Klinger, says the U.S. Supreme Court has ruled it constitutional for police to shoot someone in the back if they believe that person could be a threat.

On Thursday, Dotson unapologetically defended the shooting as protesters pledged to stand firm. Said the director of a group called the Organization for Black Struggle: "We will not go away."

A vacant building and at least one car were torched, police said. Officers responded with tear gas and arrested at least nine people on charges of impeding traffic and resisting arrest.

Dotson said that crowd-control tactics were justified because officers were being hit with bottles and bricks and protesters refused to clear out of the roadway.

CBS affiliate KMOV reported that a man who lives at the home where the search warrant was being served has been arrested on gun charges.

Roderick Williams was charged with unlawful possession of a firearm. Police said three of the four guns found after the shooting were stolen.

Authorities said a woman inside the home was questioned but then released.

The scene unfolded less than two weeks after violence marred the anniversary of the day Michael Brown was fatally wounded by a white officer in nearby Ferguson. His death launched the national Black Lives Matter movement.

The latest shooting happened while officers were serving a search warrant. They encountered Ball-Bey and another suspect running from the home, police said.

Ball-Bey turned and pointed a handgun at the officers, who shot him, authorities said. He died at the scene.

The handgun found in the dead man's possession had one round in the chamber and 13 more in the magazine, Police Chief Sam Dotson said.

Some protesters questioned the police claim that the suspect was armed. Distrust of police accounts has been common since Brown's death.

On the night of Brown's anniversary, 18-year-old Tyrone Harris Jr. was wounded by plainclothes officers in Ferguson when he allegedly first fired at them. His father labeled that account "a bunch of lies" and insisted his son was unarmed.

Later, police released surveillance video recorded moments before the shooting that appeared to show the younger Harris pulling a handgun from his waistband and running in the direction of the officers.

"I understand people's skepticism," Dotson said Thursday. "But don't let social media and innuendo drive what you believe to be true. You have to let the facts speak."

Mayor Francis Slay pledged an "independent and transparent" investigation of the shooting but stood behind police.

"The police were in this neighborhood doing their job," Slay said at a meeting with the St. Louis Clergy Coalition, a group of black ministers. The meeting was at a church about a block from the shooting site.

The police chief and mayor said protesters should have their voices heard, but they differentiated between those who gather to protest and others who create mischief.

"We have to be mindful of the fact that there are criminals who were at the protest as cover for their activity," Slay said.

Activists said the police response to the protesters was unnecessarily "militaristic" and an affront to free-speech rights.

The scene of Wednesday's shooting - known as the Fountain Park neighborhood - is a historically high-crime area that has seen an uptick in violence, with 127 confirmed homicides this year. There were 159 homicides in all of 2014 and 120 the year before that.