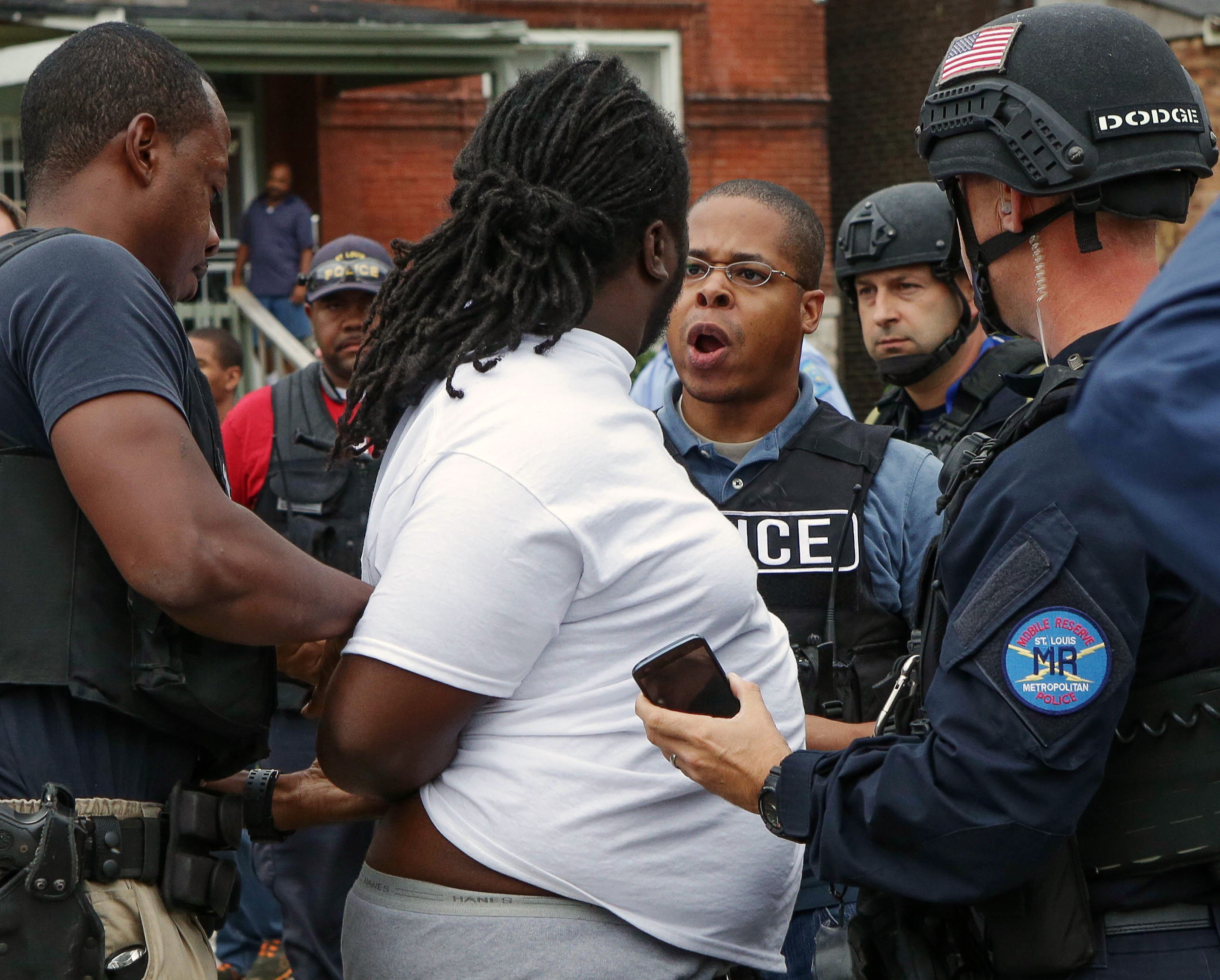 ST. LOUIS -- An armed man fleeing from officers serving a search warrant at a home in north St. Louis was shot and killed Wednesday by police after he allegedly pointed a gun at them, the city's police chief said.

The shooting sparked protests that led to the arrest of nine people by late Wednesday, according to CBS affiliate KMOV. St. Louis Police Chief Sam Dotson said officers used tear gas to clear a street after protesters who were blocking a street threw glass bottles and bricks at police.

According to Dotson, the crowd ignored requests to clear the road and inert smoke was deployed. He says that had no effect, so police then used tear gas after giving warnings over a loudspeaker.

Dotson says a car was set on fire nearby and police were responding to reports of burglaries in the area.

The shooting took place around noon Wednesday on the city's north side, KMOV reported. When police approached the home, two suspects were seen running out of the back armed with guns, according to Dotson.

Officers ordered the suspects to drop their weapons, at which time one of the suspects, Mansur Ball-Bey, 18, stopped and pointed a gun at police, authorities said. The two officers then fired a total of four gunshots towards the man, according to police.

After the officers fired gunshots, Dotson said, Ball-Bey continued running until he collapsed. He was pronounced dead at the scene.

The second suspect that was seen running from the home has not been captured. Police have not released any details about the suspect other than he is in his mid-to-late teens.

No officers were injured during the incident. Both officers have been placed on administrative leave, per department policy.

Dotson said four guns, including the handgun wielded by the dead suspect, and crack cocaine were recovered at or near the home, which last year yielded illegal guns during a police search. Three of the four guns were reported stolen, police said.

Another man and a woman who were also inside the home were arrested, Dotson said.

Police obtained the search warrant because they believed the home harbored suspects in other crimes, Dotson said. He didn't specify which crimes, but he noted that a killing happened on the same street Monday and a nearby market had been recently riddled by bullets. A 93-year-old Tuskegee Airman was robbed and carjacked nearby on Sunday, KMOV reported.

Many of the demonstrators who gathered in the neighborhood where the shooting took place yelled at police, questioning the use of deadly force. Some chanted "Black Lives Matter," the call of a movement that came to national prominence about a year ago after the police shooting death of 18-year-old Michael Brown in nearby Ferguson.

As police removed the yellow tape that cordoned off the scene, dozens of people converged on the home's front yards.

"Another youth down by the hands of police," Dex Dockett, 42, who lives nearby, told a reporter. "What could have been done different to de-escalate rather than escalate? They (police) come in with an us-against-them mentality. You've got to have the right kind of cops to engage in these types of neighborhoods."

Another neighborhood resident, Fred Price, was skeptical about Dotson's account that the suspect pointed a gun at officers before being mortally wounded.

"They provoked the situation," Price, 33, said. "Situations like this make us want to keep the police out of the neighborhood. They're shooting first, then asking questions."

Some of those who gathered had spent the morning in downtown St. Louis, marching to mark the anniversary of the fatal police shooting of Kajieme Powell. He was killed by two St. Louis officers after police said he came at them with a knife.

Circuit Attorney Jennifer Joyce is still reviewing the case to determine whether lethal force was justified.

Brown, who was black and unarmed, was fatally shot by Ferguson officer Darren Wilson on Aug. 9, 2014. A St. Louis County grand jury and the U.S. Justice Department declined to charge Wilson, who resigned in November.