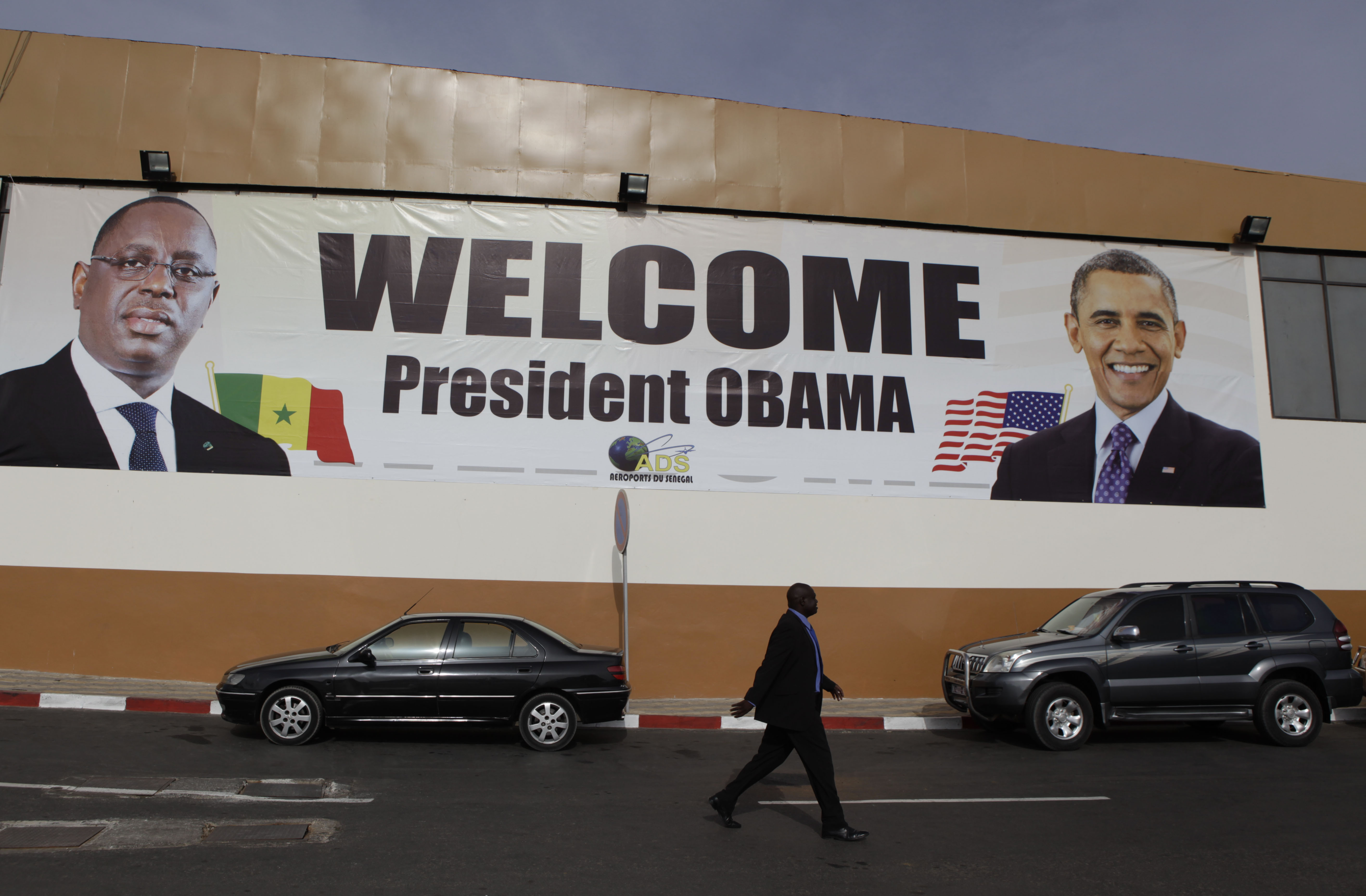 DAKAR, SENEGAL President Obama touched down aware that Nelson Mandela was on life-support and even closer to death than he was before the president and the first family boarded Air Force One Wednesday, unnerved by Mandela's declining health and certain that his passing would dramatically alter the Obamas' first extensive tour of sub-Saharan Africa.

Mr. Obama is accompanied by first lady Michelle Obama, daughters Malia and Sasha, mother-in-law Marian Robinson and niece Leslie Robinson for a trip currently scheduled to stop here, South African and Tanzania. It is unclear how that schedule might be altered should Mandela die while Mr. Obama is here. The urgency of Mandela's declining health intensified when South African President Jacob Zuma late Tuesday canceled plans to visit Mozambique on Wednesday.

White House advisers have made it clear Mr. Obama will honor South Africa's mourning and respect the wishes of Mandela's family for privacy - all of which could lead the Obamas to scrap the South Africa leg of the trip if Mandela dies before Mr. Obama's scheduled arrival Friday.

Meanwhile on Wednesday, dozens of Senagalese officials greeted the first family at Leopold Sedar Senghor International Airport, the receiving line stretching for yards and the handshakes long and lingering for Mr. Obama. The first family was set for a quiet night of rest before Thursday meetings with Senagalese President Macky Sall and a brief press conference.

Thereafter, the Obamas will venture to Goree Island, a significant slave trading depot. From the 15th to 19th century, an estimated 12 million to 15 million Africans were taken from the continent. How many passed through Goree Island is the subject of intense academic debate. Historians agree the island played some role in jailing and then transferring slaves to ships headed for North America, but disagree over the actual numbers. The island was ruled by the Portuguese, Dutch, English and French.

The Obamas will tour the House of Slaves (Maison des Esclaves), built by the Dutch in 1776. It is a UNESCO World Heritage Site now and a site of untold slave-era horrors.

The infamous "Door of No Return" is the point where slaves walked from the cramped jail quarters and into permanent enslavement. The door looked out onto the rocky shallows and slaves trekked a narrow bridge made of palm planks. They stepped into canoes that ferried them to waiting slave vessels. The daring who jumped into the sea either drowned or were attacked by sharks, drawn to the waters by the ever-present corpses thrown from the slave house after dying from disease or malnutrition.

The facility is a courtyard surrounded by cells in which men, women, children, the sick and the "recalcitrant" were housed in close, disease-ridden quarters. The men suitable for sale in the slave trade, meaning those who weighed at least 60 kilograms (132 lbs.), were jailed 20 to a cell. The wooden-beamed cells had dirt floors and were 8.5 feet by 8.5 feet.

The men sat with their backs to the wall, shackles around their neck and ankles. They were shackled in twos. On the chain between the shackles on each slave's wrist hung an iron ball weighing at least 20 pounds.

Other cells kept women and teen virgin girls, who often won a price as large as paid for the fittest male slaves. Children were housed in a separate cell. The smallest cell was reserved for "recalcitrants" - the slaves who showed the slightest resistance to the abuse, privation and suffocating conditions.

The journey through the House of Slaves could be acutely poignant for Michelle Obama, whose great-great-great grandmother, Melvina Shields, was a slave in South Carolina.

Mr. Obama, the son of a Kenyan father, is also a historic visitor, the first African-American U.S. President to tour Goree Island or the House of Slaves. Presidents Clinton, George W. Bush and George Herbert Walker Bush have all made pilgrimages to the slave house. Pictures of Clinton and the younger Bush, slighted faded through the years, hang in the modest curator's office over-looking the deceptively serene slave house courtyard.

The presidential visits have made permanent Goree Island's reputation as a place of significance in the North American slave trade saga - as have the trips made by Mandela and Mother Teresa. Mr. Obama's visit will intensify the island's link to the slave trade and deepen its symbolic resonance in America, even though the magnitude of its slave trade to this day remains unclear.