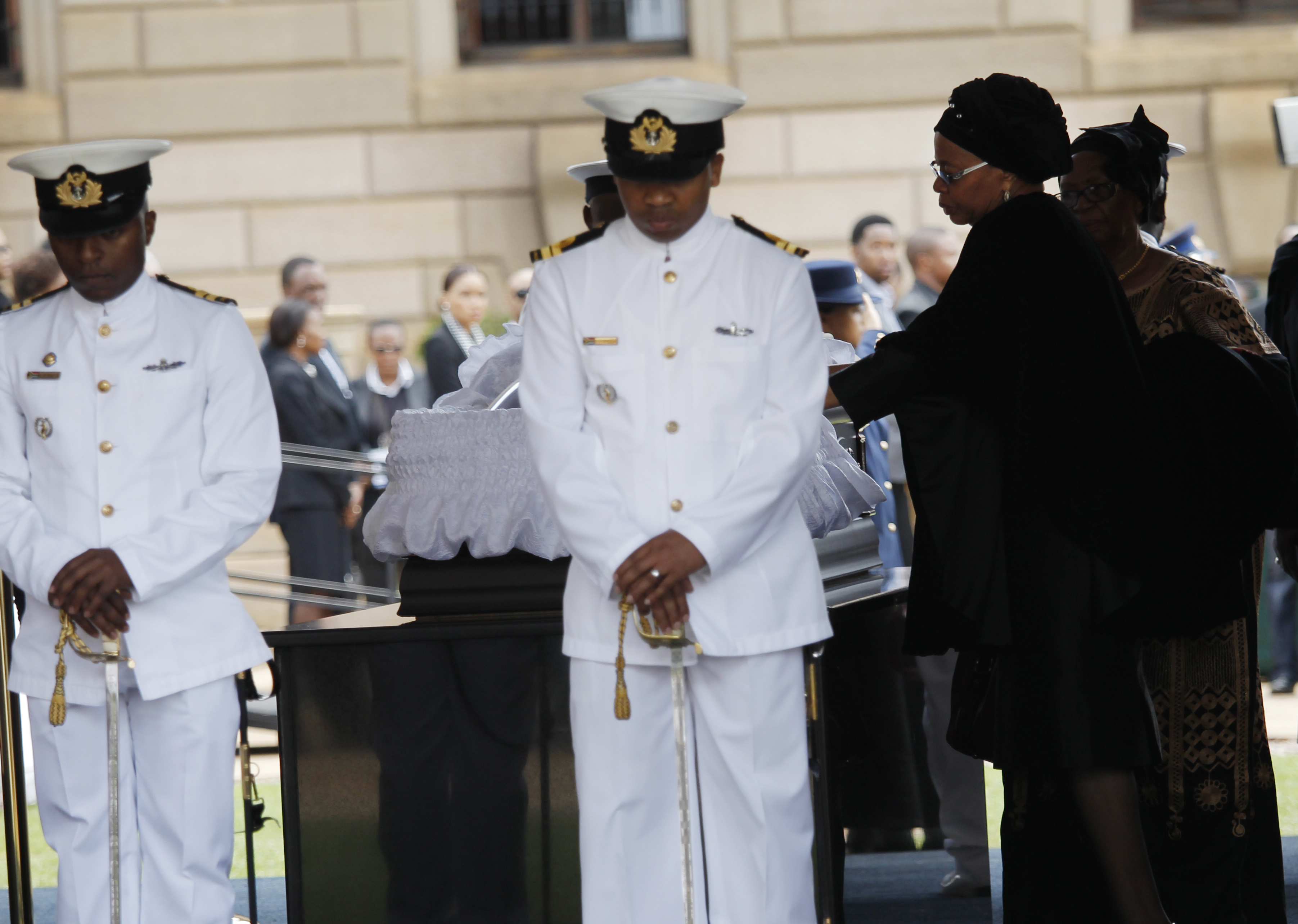 PRETORIA, South Africa -- World leaders and thousands of South Africans on Wednesday filed past the flag-draped casket containing the body of Nelson Mandela, having a final look at the anti-apartheid icon in the amphitheater where he was sworn in 19 years earlier as the country's first black president.

Some made the sign of the cross, others simply gazed at Mandela's face through a glass bubble atop the coffin at the Union Buildings, the government offices in South Africa's capital, Pretoria.

Mandela was dressed in a black and yellow patterned shirt, a trademark style that he adopted as a statesman. His eyes were closed. His white hair swept up from his forehead.

Mandela family members and world leaders viewed the body Wednesday morning. By the afternoon, long lines had formed to see the casket but the government said the "cut-off" point had been reached, urging people instead to arrive early on the following two days to get their chance.

Zimbabwe President Robert Mugabe, South African President Jacob Zuma and other leaders passed by the casket in two lines. Four junior naval officers in white uniforms kept watch. Celebrities including singer Bono of the band U2 also paid their respects. So did F.W. de Klerk, the last president of white rule who shared a Nobel Peace Prize with Mandela for ending the apartheid era.

"I hope that his focus on lasting reconciliation will live and bloom in South Africa," de Klerk said.

Some appeared lost for a moment, looking down at Mandela. South Sudan's president, Salva Kiir Mayardit, stood transfixed before removing his trademark black cowboy hat and crossing himself.

Police officers were a few steps away, one holding a box of tissues. Some clearly were overcome by the sight, one woman covering her entire face, weeping as she walked away supported by a colleague. Others carried posters bearing Mandela's image.

"I'm lost. My mind is lost," said Silver Mogotlane after passing by the casket.

"It's amazing to think that 19 years ago he was inaugurated there, and now he's lying there," said another viewer, Paul Letageng. "If he was not here we would not have had peace in South Africa."

Mandela emerged from 27 years in prison under the white racist government in 1990, appealed for forgiveness and reconciliation and became president in 1994 after the country's first all-race democratic elections. He gave his inaugural address from the amphitheater, which Zuma named after him by decree Tuesday.

Mandela said at his inauguration: "Out of the experience of an extraordinary human disaster that lasted too long, must be born a society of which all humanity will be proud."

On Wednesday morning, motorcycle-riding police officers escorted the hearse from a military hospital outside of Pretoria to the Union Buildings. People lined the streets to watch the procession, singing old songs from the struggle against the apartheid regime and calling out farewells to Mandela, who died Dec. 5 at the age of 95.

Army helicopters had been circling overhead but then a sudden quiet fell over the amphitheater as the hearse arrived. Eight warrant officers representing the various services and divisions of the South African military carried the casket, led by a military chaplain in a purple stole. The officers set down the coffin and removed the flag.

Officials have banned cameras from the viewing area and asked people to turn off their mobile phones.

Mandela's body will lie in state for three days at the Union Buildings, atop a hill overlooking Pretoria. The architect who designed it envisioned its two wings, made of half a million cubic feet (14,100 cubic meters) of stone, representing the Afrikaans and English languages spoken in the country - but none of the land's native languages.

Even from its inception, the majestic buildings have long been considered a symbol of governance in the country, and of apartheid until Mandela took office.

Each day, Mandela's coffin will be driven back to 1 Military Hospital to be held overnight. Authorities have asked the public to line the street as an honor guard for each trip.

Mandela's body will be flown Saturday to Qunu, his home in the Eastern Cape Province. He will be buried Sunday.

A massive memorial service, attended by nearly 100 world leaders, was held for Mandela at a Johannesburg stadium on Tuesday. Police said Wednesday that retired Archbishop Desmond Tutu's home in Cape Town was robbed while he was away, attending the memorial. An investigation was underway.

Like Mandela, Tutu won the Nobel Peace Prize for his efforts to promote basic rights and reconciliation during the apartheid era.

On Tuesday, world leaders, including President Obama, eulogized Mandela at a massive memorial service in Soweto, South Africa. In his speech, Mr. Obama called Mandela "the last great liberator of the 20th century."

"We will never see the likes of Nelson Mandela again," he said. "But let me say to the young people of Africa, and young people around the world - you can make his life's work your own.