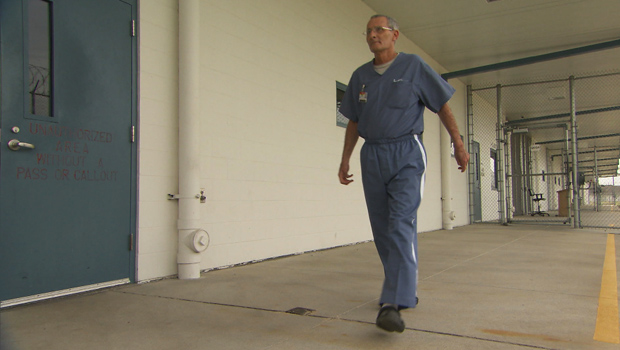 Prison time is HARD TIME any way you look at it. But it's hardest of all when the prisoner is serving a sentence that allows no flexibility at all, no matter what the circumstances. Our Cover Story is reported by Erin Moriarty of "48 Hours":

After hearing 59-year-old Wollard's story, you may think he did what any family man would do.

Or, you may agree with a Florida jury and think he went too far. But either way, you're likely to wonder: Does Wollard's punishment really fit the crime?

"Never, never in my wildest dreams did I think I would be here," he said in prison. "I still have a hard time believing it. It's unbelievable!"

Lee Wollard's troubles began six years ago. He was a professional with a master's degree in Davenport, Fla., living with his wife and their two daughters and working at Sea World. When his youngest daughter Sarah began dating a troubled 17-year-old teenager with no place to live, Wollard and his wife, Sandy, took him in.

"For about a week," Wollard laughed.

Sandy Wollard said, "It started out his behavior was fine. I'd ask him if he would take the garbage out or clear off the table, and it was, 'Yes, ma'am,' 'Yes, ma'am.'"

But Sandy says the relationship with the boy, whom we agreed not to identify, soon soured.

"This young man was taking my daughter out at night, after we had put her to bed and we had gone to bed," she said. "And he was disappearing with her. And he would disappear for days at a time with her. And she was 16 years old."

The Wollards asked him to leave, but nothing kept him out of the house -- until May 14, 2008. As Lee was taking a nap, his daughter and her boyfriend began to fight.

He heard a loud noise: "Like you were throwing stuff against the wall," said Lee.

Then came cries for help. "It's not like my family to ask for help. So I grabbed my .357 and loaded it with shells," said Wollard.

According to Wollard, the young man lunged at him and punched a hole in a wall; the teenager disputes that. But no one disagrees about what happened next.

"So I fire a warning shot into the wall, [and] I said, 'The next one's between your eyes,'" said Lee.

Sandy continued, "And the kid turned around and just hurried out the door. And that was the end of that."

Wollard was charged with shooting into a building with a firearm, aggravated assault, and child endangerment. And when he went on trial a year later, a jury convicted him of all charges -- and then Judge Donald Jacobsen sentenced him to 20 years in Florida state prison, the mandatory minimum.

That means Wollard will serve every day of 20 years in state prison.

"And I was just like, 'What?'" recalled Wollard. "You know, the blood just drained out of my head. I almost passed out."

It didn't matter that Lee Wollard was a first offender, or that no one was physically injured. In Florida, a conviction for aggravated assault involving a firearm means an automatic 20 years. That's the mandatory minimum sentence.

"I looked at him and told him, 'I would not be sentencing you to this term of incarceration, 20 years Florida state prison, if it were not for the fact that I was obligated under my oath as a judge to do so,'" said Judge Jacobson.

"But that had to be difficult," said Moriarty.

"Being a judge is difficult," he replied.

Wollard's case is just one of thousands in this country, most involving drug offenses, in which the punishment is determined by mandatory sentencing laws, laws created by legislators who strip away power from judges they believe to be too lenient and give it instead to prosecutors.

"It's an invaluable tool for prosecutors and law enforcement to use, because it gives us leverage," said Steven Jansen, who runs the Association of Prosecuting Attorneys in Washington, D.C. He says that defendants, when faced with harsh mandatory sentences, are more likely to negotiate a plea bargain, avoiding lengthy, costly trials. And the sentencing is more fair, he says.

But is it really?

Moriarty asked, "When you have these mandatory minimum sentences, aren't you treating the violent career criminals the same way as you are treating the first offenders, the non-violent? They get the same sentence."

"But justice is blind," said Jansen. "And so it doesn't matter what status you are in our society. If you commit these crimes and fulfill the elements for a crime, blind justice will charge you with that. And you should receive equal sentence just as anybody else that committed that same crime."

That was the thinking in the late 1980s, when mandatory sentencing became a popular "tough on crime" tool as part of the government's war on drugs -- locking away not just drug dealers, but often their customers, many young first offenders.

"It seemed so contrary to everything I thought I had learned in Civics 101, that judges can't judge now when the crimes carry mandatory minimum sentences," said Julie Stewart, who started the advocacy group Families Against Mandatory Minimums.

She says Lee Wollard's 20-year sentence is not as unusual as you might think.

Take the case of Weldon An'gelos, a music producer with no previous record, who in 2004 was sentenced to 55 years in prison for selling $350 worth of marijuana to undercover cops who found a firearm in his possession.

And then there's 19-year-old Jacob Lavoro in Texas, who is now facing up to 20 years in prison after getting caught with a tray of hash brownies.

"No one is saying these people shouldn't go to prison for committing a crime," said Stewart. "I think that whether you like the law or not, it exists. If you violate it, there's a consequence to it.

"What we say is that the judge should be able to determine what the punishment is -- not a legislator, not a prosecutor."

Stewart blames mandatory sentencing for prison overcrowding. Since 1980, the average sentence for drug trafficking has more than doubled, from four years to nine-and-a-half.

And even Steven Jansen, of the Association of Prosecuting Attorneys, admits sometimes the wrong people are incarcerated.

"Unfortunately, you have these situations where people who think they are innocent decide to go to trial instead of accepting a plea offer, and they end up receiving a more severe sentence than what maybe a gang member or a drug dealer would have taken," said Jensen.

Which is what happened to Lee Wollard.

"The prosecutor offered you probation, no jail sentence," said Moriarty. "

"Right," he said. "It never dawned on me that I would lose, because I hadn't done anything wrong. I'd protected my family, and I didn't even hurt anybody."

And Wollard's sentence seems particularly harsh, says his wife, when you consider that in Florida, if you happen to kill someone while "standing your ground" in self-defense, you may face no charges at all.

"But if you shoot a warning shot just to scare them away, you'll get twenty years in prison," said Sandy.

The Polk County State's Attorney, whose office prosecuted Wollard, refused to discuss his case. But nationally, there is a move to return some discretion to judges.

Earlier this year, federal sentencing guidelines were amended to reduce prison time. And in Florida, the legislature passed a law that exempts firing warning shots from the current harsh penalties.

But it comes too late for Wollard.

"Everything, everything is gone," he said.

Wollard has asked the Florida Governor for clemency -- which, incidentally, his daughter's former boyfriend supports. If he doesn't get it, Lee Wollard will leave prison in July 2028, when he is 73 years old.

"As bizarre as it sounds, if this is what the State of Florida requires of you to make sure your family is safe, I'm willing to do it," he said. "It's a bargain. I've got three family members, my two daughters and my wife, and they're alive. They're alive because of this. It's a bargain. Twenty years is a bargain."

The art of Kim Novak
Thanks for reading CBS NEWS.
Create your free account or log in
for more features.
View CBS News In
CBS News App Open
Chrome Safari Continue
Be the first to know
Get browser notifications for breaking news, live events, and exclusive reporting.