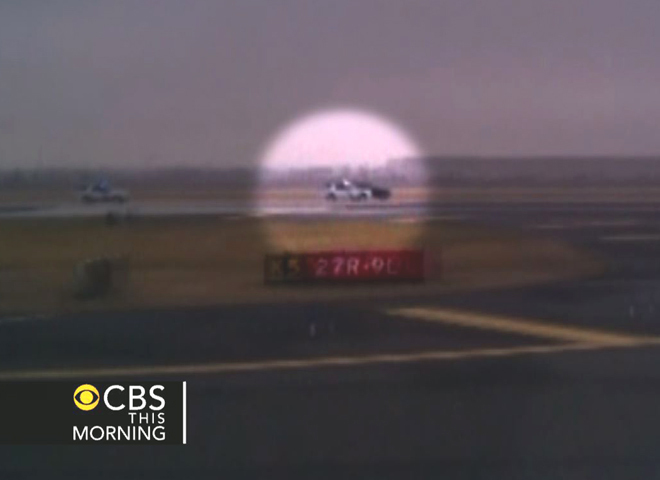 (CBS News) A 24-year-old man faces criminal charges and psychiatric testing after he broke through a fence and drove a black Jeep Cherokee onto the runway at Philadelphia International Airport Thursday.

CBS News correspondent Whit Johnson reports that, for a while, authorities thought it might be a terror attack.

One flight had just seconds to abort its landing. More than a dozen other planes drifted in a holding pattern as air traffic controllers scrambled to communicate with pilots: "We're stopping all airport movement at this time due to a situation on the field," a controller announced.

"Yeah, I guess somebody's having fun," replied one pilot.

Police said Kenneth Mazik was either drunk or high on drugs when he rammed his Jeep through a chain link gate.

The ensuing chase at the busy hour of 11 a.m. shut down the airport for roughly 30 minutes.

According to CBS Station KYW, police said Mazik drove around the airport for several minutes, including down runway 27R, before police were able to stop the car and take him into custody.

In addition to DUI and resisting arrest, Mazik may face federal charges.

Police called it an isolated incident with no link to terrorism; KYW reports no explosives were found in the vehicle.

But a decade after 9/11, it's raising questions about airport perimeter security.

"Terrorists remain fixated on aviation, so aviation has to maintain the highest levels of security," aviation expert Peter Goelz told CBS News. "It does highlight a potential vulnerability which is why I think it needs to be reviewed and reviewed quickly."

A vulnerability which someone with more sinister intentions may look to exploit, said Johnson.

CBS News senior correspondent John Miller said there have been 25,000 airport security breaches since 9/11, but actual perimeter breaches in which a car wanders onto tarmac is "pretty rare."

"The problem is, there's not much of a way to stop them, the way airports are configured," Miller said. "You look at Philadelphia International Airport, like a lot of major airports, has 40 unmanned access points around the perimeter. There are fences there and gates controlled by locks, key pads, touch pads, things like that. But as we saw yesterday, if you're going to drive a car through one of them, there's not much that can be done to stop it."

To watch the complete report click on the video player above.