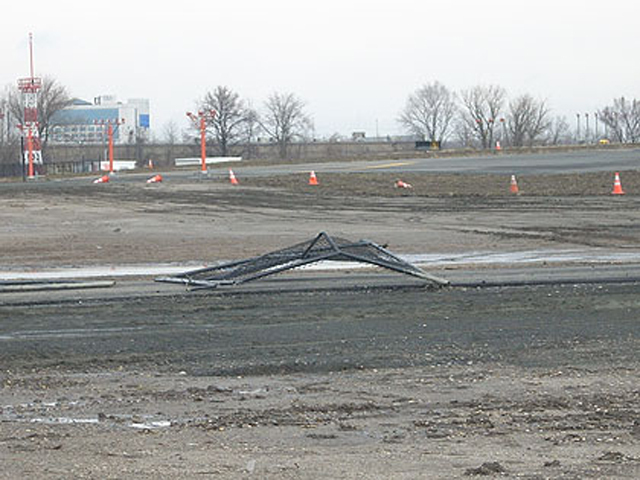 (CBS/AP) PHILADELPHIA - A man faces DUI and reckless endangerment charges and will undergo psychiatric tests after he sped his sport-utility vehicle through a fence Thursday and drove up and down two runways at Philadelphia International Airport, police said.

Chief Inspector Joe Sullivan, who heads the Philadelphia Police Department's homeland security and counterterrorism division, said there was no connection to terrorism and that the 1999 Jeep Cherokee came up negative when K-9 units checked it for explosives or other types of hazardous materials.

The tense moments began shortly after 11 a.m. when the suspect, identified by police as Kenneth Richard Mazik, 24, of Chadds Ford, Pa., pulled into the driveway for a gate at the airport, stopped, went into reverse and then sped through a fence where workers were doing construction, Sullivan said.

Mazik, who was immediately detected by ground radar, then drove up the length of one runway before crossing over onto a parallel runway and driving back with a phalanx of police and airport vehicles following him. "He's quickly surrounded," Sullivan said, and was apprehended within five minutes.

CONTROLLER: 1424, Philly ground. We're stopping all airport movement at this time due to a situation on the field and I'll get you moving shortly. You're number three for - a few more minutes.

PILOT: OK, what is the situation over there?

CONTROLLER: There's a vehicle on the airport and it looks like the cops finally caught up with him.

CONTROLLER: Delta 1694, Philly ground, you'll be number three to move from spot nine once I get you going. Just monitor the frequency. All airport movement is stopped.

The airport was closed for about 30 minutes "out of an abundance of caution," said airport spokeswoman Victoria Lupica. There were some delays in arrivals and departures, with about 15 to 20 aircraft affected in all, Lupica said. No injuries were reported.

After he was apprehended, Mazik refused to go into his cell and took swings at an officer, Sullivan said. Two officers sustained minor injuries. Mazik is charged with DUI, reckless endangerment, resisting arrest and assault on a police officer.

It was not immediately known if he had obtained an attorney.

Watch YouTube footage of the incident with audio from air traffic controllers below: